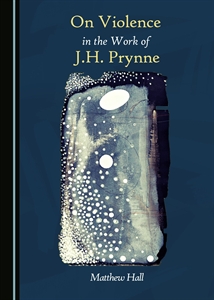 On Violence in the Work of J.H. Prynne by Matthew Hall
Cambridge Scholars Publishing, 2015

Violence and poetics are the key poles in Canadian-Australian critic and poet Matthew Hall’s new scholarly release. Hall charts how the British late-modernist poet, Prynne, responds to violent events of the twentieth and early twenty-first centuries – from the Holocaust, through apartheid, Chernobyl, and Australian colonialism, to Abu Ghraib. These affective sites of violence are linguistic, too: chapter two takes its subject as the ‘the sociolinguistic war’ which takes place under ‘the strain of economic factions and the reach of the multinational resource sector’. In dealing with these events, which are all tied up in language whether they seem so or not, Hall argues that Prynne infects his work with that which cannot be reconciled; ‘pure violence’. He writes, ‘Prynne’s poetry problematises an experience of the world inextricably knotted with the manners in which it may be understood’. Violence, consisting of its ‘perpetration’ and its associations with ‘systematic and political constructs’ of power, frames this experience of the knotted world.

In considering these violent events, the book dedicates its five chapters to close readings of three of Prynne’s editions – News of Warring Clans (1977), Bands Around the Throat (1987) and Acrylic Tips (2002) – and two of his poems, ‘Es Lebe der König’ from Brass (1971) and ‘Refuse Collection,’ published in a special edition of Quid journal in 2004. As Hall argues, his readings, like Prynne’s poems, are ‘engrained with the history of the event’. Much of Hall’s argument around the significance of Prynne’s work hinges on Alain Badiou’s theory of the event, which, for Hall, consists of a ‘real rupture’ of an existent paradigm, in the wake of which forms a ‘new subject,’ which persists by ‘fidelity’: ‘the name of the continuation of the existence of the process of the new subject’. Similarly to John Kinsella’s argument that ecopoetics is largely an ‘egopoetics’ in that its placement of nature as a dialogic correspondent is ‘an act of convenience and not reality’, Hall emphasises the reality that the three elements of Prynne’s project – the historical event, its non-poetic (mythic or mediatised) representation, and the poem – sit together irregularly. Such an emphasis drives his attention to the fact that the poem is a ‘momentary clarity, easily soluble,’ or, in other words, that it holds its structure briefly before subsumption, and until further attestation.

Violence is articulated in various ways throughout the book. In chapter one, the Holocaust is the violent event and we track the aesthetic distension and incompleteness it causes – its ‘estrangement’, ‘displacement’, and ‘dissonance’ – through Prynne’s elegy (of sorts) to Paul Celan, ‘Es Lebe der Konig’. In chapter three, on Bands Around the Throat and looking at Chernobyl and South African apartheid’s ‘necklace killings,’ violence is experienced as a ‘“continuous formation, rupture and reformation” of sensation’. Chapter five deals with the embodiment and sexualisation of violence via Kafka, Judith Butler, Elizabeth Grosz, and Giorgio Agamben’s state of exception. But it is Hall’s identification of a public ‘coopt[ed]’ into the ‘democratic process of decision making’ that is most compelling here, and that indicates the most insidious violence, in a poem responding to the mainstream media-spread images of torture at Abu Ghraib. It reveals Prynne’s poetic function of critical resistance: America’s mediatised coercion – or Prynne’s great metonym, ‘call-sign Freedom’ – is interrupted by his use of its ‘public language’ against itself. Aporias double up and down, and the ouroboros is reinvited.

The way that Hall is able to be close to the linguistic ‘constriction’ and ‘censorship’ that Prynne represents is really the outstanding mark of this book. The concept of ‘survivors keeping watch over the annihilated’ expounded in the first chapter carries throughout. It is through this kind of attestation that language and, indeed, scholarship can do ethical work. (Ethics is broached fleetingly, but seems more of an implicit motivation of the study). It can symbolically, or, in the case of scholarship, analytically, admit its complicity in the violence (and there’s a substantial nod to Slavoj Žižek on this point) while concurrently bearing what Derrida calls ‘witness for the absence of attestation’. Long sections of glistening, close poetic analysis demonstrate how comfortable Hall is in this space.

An abstract conceptualisation of the usually lyric subject also occupies this closeness to Prynne’s poetic re-events. Violence is done to it, but it also attests to violence. Chapter Two draws us into tracking this almost paratactical progression of the lyric through Prynne: Hall shows that News of Warring Clans uses ‘the usurpation and subsumption of the lyric into the violence of exploitative and warmongering language’ as its material constraints. He elucidates Prynne’s precarious maintenance of the lyric in his analysis of the subject’s catharsis in Acrylic Tips. The book perhaps even shows symptoms of being over-invested in this maintenance of the lyric and its associated person-centered approach to violence response. When ‘Vocab[ility]’ is the position to which a child ‘graduat[es]’, we might be drawn to enquire after those who cannot lyricise their own experience. Or can everyone lyric? As Hall makes explicit, though, that we’re asking these questions are part of the point of Prynne’s affect: ‘The reader is left travelling into the heart of a contaminated country [both Ukraine and the lyric form] without the means of expressing the horror of bearing witness, and with the knowledge of the eradication of the account of the victims’.

The book’s attempt to negotiate the tensions between a dialectical procedure and a nomadic one is clearer and more critically generative. Fittingly, Hall seems to wrestle with the dialectical, and I think he lets it maintain its corner. He quotes the famously dialectical Clausewitz in the introduction to chapter five, and in chapter four proposes that the ‘occasion[ing]’ of a ‘cultural hybridity’ made of Indigenous and Western ‘values and traditions’ would be ‘the most providential conclusion’ possible for a nation built on colonial violence. Although the adjective, providential, seems to come out of nowhere, we might understand Hall’s expression in light of Dominique Schnapper’s notion of ‘providential democracy,’ a projected conclusion that orients practice (which, in regards to Schnapper’s term, privileges equanimity between individuals as an alternative to ‘civic transcendence’). Dialecticism in this case of Prynne’s is particularly challenging because it asks us to look at both sides, the violator and violated, fully in the face, up close and ugly, and accept that parts of each will constitute the new subject.

It is hard to discern from the book what should be done in response to violence; either what Prynne advocates doing, or whether the point of his work sits at a distance from the idea that something could or should be actively done at all. In the conclusion to his analysis of the title poem of Acrylic Tips, a short work dealing with ‘forced adaptation’ (‘language … under pressure’) in direct reference to British colonialism’s imposition on the indigenous people of this land, Hall writes, ‘The utilisation of a model of pastoral elegy aligns the poem’s narrative and Prynne’s poetic construction of colonial conditions to a movement from loss to possible consolation’. Consolation is a significant idea for Prynne via Hall in making sense of the after-realm of violence. It is central to the arch of this pastoral elegy form he uses and departs from, and is analogous to the subject’s return to a musical fugue’s tonic key, a form riffed on in Hall’s analysis of ‘Es Lebe der König’. Hall suggests that in the face of violence, Paul Celan in the poem ‘Todesfuge,’ and Prynne responding to ‘Todesfuge’ in ‘Es Lebe der König,’ use the fugal form and its boomerang-like fidelity to itself as a way of representing a remembrance of the pre-violated subject.

The book advances several distinct and significant contributions to Prynne scholarship. Being on a dramatically under-read poet, the book benefits from Hall’s deep historiographical research and its resultant new theoretical concepts. One can imagine that a few of these have initiated what will become further enquiry, perhaps beyond Prynne studies. The idea of public language as refuse, which underpins chapter five, for example, opens a field of enquiry into the power of the public reader. This is also the utility of ‘Refuse Collection’ as lyric poem, which ‘asks the reader to formulate her or his own judgements with regard to the experience of suffering, a judgement the reader must create and defend from her or his own position within the world’. Hall’s attitude towards discourse and its subject, here, is representatively and demonstrably non-violent. One might further identify the importance of thinking about dialecticism in relation to Prynne’s work, in that the reader is invited to form their own judgement in the face of Prynne actively subsuming meaning and obfuscating ‘expressive interpretation’ through devices like ‘glottal sonority’. Again, we’re called to fidelity. And then there are Hall’s many, many crystalline insights into the affect of Prynne’s poetic practice, such as his examination of ‘the function of the command, used in close proximity to alliterative, onomatopoeic word clusters’ in Prynne poetry since Brass.

Simon Eales is an artist and researcher from Melbourne, Australia. He lives in Buffalo, New York where he is working towards a PhD in the Poetics Program at the University at Buffalo.

View all posts by Simon Eales on Cordite →