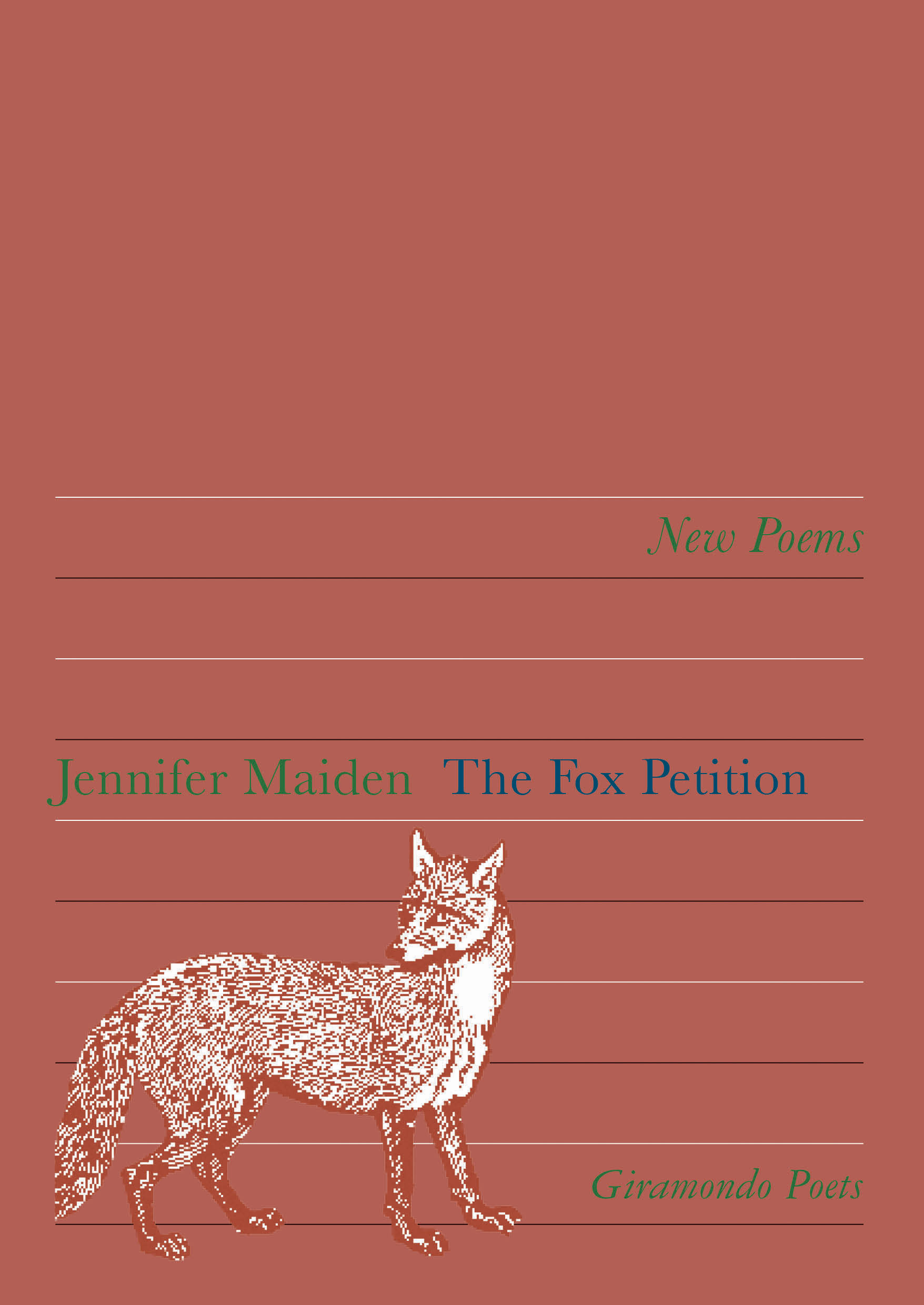 Stefanie Bennett woke up alongside Jennifer Maiden one morning, remarking, ‘An enemy is nothing to sneeze at: / Often his eau-de-Cologne’s / All embracing’ (‘Stratum’). This might be the too-cute, not-clever start to an amalgamating take on these two books from two poets with similar concerns and different styles. On the thirty-fourth page of the The Vanishing, Bennett quotes Maiden in square brackets: ‘But you might as well at this stage ask: / what Civil War is it we are enjoying.’ It is one of many mentions, quotes, and dedications to established poets in Bennett’s book, and it carries a similar sentiment to what I said she said in bed: we can be seduced by opposition. The consequences of this seduction are wide-ranging. Both books clearly stage oppositions and comparisons, not only to connect their poetries with the real world, but also to engage with the tensions of its adversarial discourse.

Maiden’s most delightful representation of this – the matchmaking of strange bedfellows – will be familiar to readers of her previous work. In The Fox Petition, ‘The Harvard Business School woke up next / to Julie Bishop,’ (‘Animism’) and, on a plane, ‘Kevin / Rudd and Dietrich Bonhoeffer, [are] still / trying to sort out Manus Island’ (‘Diary Poem: Uses of Xenophobia’). These couplings allow Maiden to unravel knots of hypocrisy without advocating for one side or another. As each pages-long poem continues, the multiplying ironies that result from these hypocrisies stew, becoming more discomfiting and delicious. In the second section of ‘Uses of Xenophobia’, which is framed as an autobiographical interlude, Maiden reflects on her ‘mad’ next-door neighbours, who have ‘pasted a picture of Rasputin / on their window,’ and ‘placed / a blue cube of rat poison over / [her] fence’: ‘to them / it is vital to be Australian, which / seems to mean rat poison and a flag’. This microcosmic, urban passive aggression brings into relief Rudd’s political – read, dehumanising – equivocations regarding the best ‘solution’ to the ‘asylum seeker problem’.

Maiden’s autobiographical voice is familiar, too. It transmits the kind of insight her poetry advocates, which is also, in musical terms, the tonic to dialogic friction. In the Diary Poem, ‘Uses of the Female Duet’, similar pairings, between Tanya Plibersek and Julie Bishop, opera singers Rosa Ponselle and Marion Telva, and Penny Wong and Gillian Triggs, give way to a resonant Melissa Parke, Federal Member for Fremantle (with Jenny Macklin in harmonic support), who, like Maiden in The Fox Petition, ‘does seem / devoted to the innocence in living’.

Both books bow deeply, if also ironically, to European influence. The title of Maiden’s book refers most directly to the petition circulated in New South Wales in 2015 calling for an official bounty system for foxes (imported from England in order for colonials to have something to hunt). The Shooters and Fishers party of NSW, unsurprisingly, were all over it. In Parliament in May 2014, ridiculing another petition seeking to allow foxes to be kept as pets, their member, Robert Borsak, lamented, ‘I dread the day I walk down George Street and pass a yuppy with a fox on a lead or indeed see a fox sticking its head out of a man bag.’ The title also alludes to the eighteenth-century Whig statesman and politician, Charles James Fox, who Maiden claims as her ‘favourite politician / of all time’ (‘Uses of the Female Duet’). Like Melissa Parke, Fox, known for his support of the French Revolution, abolitionism, and the deepening of juridical capability, might be described as ‘devoted to the innocence in living.’ And, significantly to The Fox Petition, he spent almost his entire career in political opposition.

Stefanie Bennett looks across the Channel to the little-translated, northern French and quotidian poetics of Guillevic. James Sallis’s piece on John Montague’s translation of Guillevic’s Carnap, for the Boston Review, suggests that ‘even in French, Guillevic can be an elusive read. Slight, elliptical, gnomic, the poems vanish when looked at straight on. ‘Les mots / C’est pour savoir,’ he says. Words are for knowing.’ Bennett attains many of these traits. In her Foreword, she invokes Guillevic as a model meditator on the complex relationship between ‘man’ and the natural world. His sparse lines suggest that while he may have considered a multitude of phenomena, in keeping with the tradition of the mystic, he delivers only a few symbolic points for us connect ourselves. Inviting us, too, into such thought, Bennett writes, ‘we had best gather together what’s left of all we’ve scattered, abused and refused to take notice of in memorandum.’ We – in all senses of the word: individual human subjects; the zeitgeist; collective culture; and the ecology we share and are destroying – are vanishing. We best believe it, because memento mori is the best we can do. Only our totems of this remembering, the menhirs, will continue to objectively exist.

In her Part II poem, ‘Memoir,’ for example, Bennett links the ancient Celtic religious practices of ‘the Menhir people,’ carried out on Guillevic’s home turf in Brittany, with the conditions for a ‘con- / Structed future.’ She describes the agent of this connection as ‘A kinetic Mammon / Wearing / Two hats,’ the one hat belonging to complex history, and the other to present action. The collection also wears two hats: one, the first part, posited as a present lyricism, with universalising titles such as ‘Stratum,’ ‘Arrival,’ and ‘Exit,’ and the second as a history, subtitled ‘Repel & Attract: An Orphic Conflict.’ There are certainly elements of religious Orphism present, of transmigration, the ascetic life, and having seen the underworld and returned. However, this is perhaps only inasmuch as the collection proceeds from Guillaume Apollinaire’s artistic Orphism, with its fauvism, colour theory, and pure lyric abstraction.

The next poem, ‘Variable Contrasts’, dedicated to Thomas Shapcott, stages a significant oscillation between unlikely opposites, suspension and coagulation, under this tarp of surrealism:

The idea of an ‘Aspic’ renaissance suggests that the ‘pure psychic automatism’ of surrealism is aesthetically upheld as an aperitif of stasis. The gelatinous mould can change – it can be French surrealist Paul Éluard’s ‘wind, / Undecided,’ for example – but it remains some version of discrete and wobbly. The micro-variations in this state’s definition (‘Aspic,’ ‘Undecided,’ ‘Hesitating,’ and ‘coagulates’) each take a turn, none acceding to preeminence. As the final lines reveal, awareness of this free agitation of thought is different to being involved in it. Neither ‘Passé fanaticism,’ nor having ‘knowledge / Of it,’ sounds desirable, but they constitute Bennett’s two necessary poetic and, perhaps, human, processes. The aspic metaphor suggests that, for Bennett, the meat of life, its events and physical objects, are irrepressibly transformed into poetic symbols. And, then, if we frame her as a surrealist following poets like Éluard and Aragon, we are able to view these symbols as expressions of some notion of true life.

Pages: 1 2
This entry was posted in BOOK REVIEWS and tagged Jennifer Maiden, Simon Eales, Stefanie Bennett. Bookmark the permalink.
Simon Eales is an artist and researcher from Melbourne, Australia. He lives in Buffalo, New York where he is working towards a PhD in the Poetics Program at the University at Buffalo.