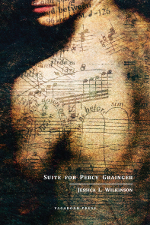 Such a prior collaboration is not the only reason a comparative reading of each poet’s new solo works – which were launched together – might be fruitful. Carruthers’s Axis Book I: ‘Areal’ thinks about ‘notational poetics’, constructed of cantonal axes whose directions dictate as much of the poetry’s meaning as the coordinates they ping along the way: ‘I have tried to learn as a poet how to play on several registers at once. These poems are systems,’ Carruthers writes in one of his prosaic, explicatory sections. He proposes Areal as the inaugural episode of a lifelong epic: a long, long poem. Wilkinson’s Suite for Percy Grainger) is notational in both similar and different ways. Like Carruthers, Wilkinson creates a through-line of experimentation, feeling out innovative ways to render the poetry that makes up her biography of the Melbourne-born modernist composer. Wilkinson uses axial strokes of unhinged musical notation, recollection, archival sinew, and acknowledgement of the projection involved in her role as biographer.

Both think about ‘fields’ of knowledge and the lines that cross them, feeding other fields. They create simultaneously rhythmic and arrhythmic flows glittered with scholarly allusion. Both collections exemplify a sustainable, re-readable, vibrational poetics that breaks the ‘I’ and its associated machinery. Again, there are consistencies and cross-pollination between them. As Carruthers writes in his review (published in these pages) of Wilkinson’s marionette: a biography of miss marion davies (Vagabond Press, 2012): ‘Unable to be mastered, marionette inaugurates a poetics of the Real where writing happens around a void, the void of the Subject: the split ‘I’ who does not write the poem but who is the poem.’1 He tracks Wilkinson’s unravelling of the crafted image of Davies as puppet. Hang the biography; live the Realpoetik!2 Wilkinson demonstrates here that we can reclaim history through opening spaces, punctuating plains, ill-fully translating idiom, and unloading identifying emphases.

In marionette, Wilkinson forges the unique poetico-biographical approach she dazzlingly wields in Suite. Between that and this, speaking at a symposium entitled ‘The Real Through-Line’ in Melbourne 2013, Wilkinson argued that ‘in order to represent such an enigmatic figure (as Grainger) on the page a new form of expression is required – one that is faithful to his eccentric life and voice.’ She outlined Grainger’s deeply contradictory passions (a vegetarian who hated vegetables, for example), and the amorousness with which we might approach his life of shamelessly documented proclivities. A biography of Grainger has different implications to one of Davies, as Wilkinson notes in her epilogue. No paucity of subjective utterance with him, only a vast and exponentially expanding field of information and reflection through which Wilkinson has trawled: at Melbourne’s Grainger Museum and Grainger’s house in White Plains, New York. Compression, then, is a foolish pursuit – both of Percy and Suite. And so, bouts of listless self-analysis – ‘This struggle against dispersal’ – become waves of effect and rapture, as in ‘Anarchival’ (after Walter Benjamin):

The protraction of Suite’s beginning is an example of the absurdity Wilkinson applies to the notion of fixed chronological points in a life. Past the title pages of publishing necessity there is her dedication (‘for Bun-Bun’); a concert-programmatic table of contents; epigraphs from Emerson and Whitman (two of Grainger’s own philosophical inspirations); a ‘Gloss of Terms’; a ‘Preamble’; a ‘Forward Motion’; a ‘Prologue’; a ‘Consummat(ion)’; a ‘Wreckage of a PREFACE’ … and the poetry’s already begun. The short poem, ‘Prologue’, mentions ‘drifting frames’, ‘thwarted chronologies’, beginning being only possible at death, and the idea that I think provides an antidote to these complications of conventional biography, typeset crossways:

We’re being told that beforehand – before the words were roman, as they are here – there was elemental attraction, intention, empathy, erotics. Despite it being dubious romance between Percy’s mother, Rose, and father, John – ‘Married life: Cruelty (…) Progeny: Genius!’ (maybe romance must be razed for love) – by the time Wilkinson’s thrilling single, ‘Nr. 1 Arrival Platform Humlet’, rolls in on page 32, she has established her intoxicating, book-rotating momentum:

Wilkinson carries the energy of Grainger’s piece of the same title, which, as she transcribes into the poem from his program notes, is ‘the sort of thing one hums to oneself as an accompaniment to one’s tramping feet.’ Grainger writes that the piece was ‘begun in Liverpool Street and Victoria railway Stations (London) on February 2, 1908; was continued in 1908, 1910 and 1912 (England, Norway, etc.), and scored during the summer of 1916 in New York City.’3 If we amend that note to add its rescoring here, we get the vibe: Wilkinson steps into the Grainger aura, which she casts as amendable, pliable, and multileveled. For example, typographically, her poems are cut with illustration, warped staves, faint shadows, reprinted collages and transcription of Grainger’s own words. Wilkinson doesn’t objectify or – I don’t think – fetishise Grainger, nor does she put on a Grainger hat, or imitate him. Grainger radiates and Wilkinson, here, radiates in the same frequency.

The versatility and dexterity of Wilkinson’s own compositions, plus the research with which the book’s evidently dripping, make Suite both a breathtakingly pleasurable poetic experience and a serious development in Grainger scholarship. Wilkinson shows Grainger’s most significant philosophical, if not technical, innovation, ‘Free Music,’ by letting her text, her research, her curated sense of time, and her own mingling with Percy ‘roam thru tonal space’ just as Grainger imagined a painter was ‘free to draw and paint free lines, free curves, create free shapes.’4

Pages: 1 2
This entry was posted in BOOK REVIEWS and tagged A J Carruthers, Jessica L. Wilkinson, Simon Eales. Bookmark the permalink.
Simon Eales is an artist and researcher from Melbourne, Australia. He lives in Buffalo, New York where he is working towards a PhD in the Poetics Program at the University at Buffalo.