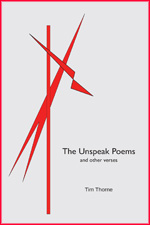 The Unspeak Poems and other Verses by Tim Thorne
Walleah Press, 2014

The book consisted of a single poem, ‘The Atlas’, which begins with Thorne’s childhood in Tasmania and slowly moves out to expand on the personal, political social and artistic elements that had shaped his life to that point. At the end of that book he writes:

Thorne’s had three decades of blank pages on which to re-map and redraw his boundaries. But he’s also gone deeper than the surface topo map to, as he says, ‘study the underlying trends’. Much of the ‘tensions and contentions’ he uses to create these charts draw on the injustices and hypocrisy that run through contemporary society because, above all else, Thorne is a political poet.

For some critics a label of being a ‘political poet’ is something of a polite criticism: ‘what can you expect from a political poet’? In Thorne’s case, the label sits comfortably in his terrain of politics , as it weaves into the fabric of his poetry, an important part of the whole, but not the sole reason for its being.

The title of his fourteenth collection, The Unspeak Poems, hints at a political meaning; what can’t be spoken, why can’t these poems be spoken? The obvious Orwellian reference to ‘the unspeak’ is recurrant.

The first poem in the collection, ‘Love on a Brick’, takes a simple act of defiance from Australia’s colonial past – a convict scratches the word ‘love’ onto a convict made brick rather than the standard arrow. For Thorne this becomes a victory of the imagination:

Thorne takes this messages and applies it to the present, ending the poem with optimism:

Unfortunately, the cities built sport different bricks as we learn in ‘Are We There Yet?’. Here, we’re launched straight into popular culture with the opening statement:

There is an immediate sense of surprise at a seventy year old poet talking about ‘growing up’, but also the shock of popular online culture asserting itself in the first line. Worthington was a teenager whose sole noteriety was the hosting of a party that got out of control at his parents’ house at Narre Warren (a suburb of Melbourne), and being interviewed afterwards by the TV show A Current Affair (later to go viral on YouTube). A reporter adopts the tone of Worthington’s absent parents in this exchange from the original interview:

Reporter: You should go away and have a good long hard look at yourself.
Worthington: I have, everyone has, they love it.

Thorne takes this quote and paraphrases it at the end of the first stanza:

He then moves the poem in an unexpected direction:

Thorne is at his best during the rest of this long poem; dissolving into the pre-Internet age, 1972 to be precise, with the poet learning how to drink alcohol undetected on a Greyhound bus between Sacramento and LA. We’re moved effortlessly from a pimpled Australian adolescent with oversize yellow glasses to a dingy romanticised 1970’s America:

We’re left with the title ‘Are We There Yet’ – a suggestion that we are travelling to somewhere/something. The poem also takes us to the man holding his shopping baskets blocking a tank in Beijing in 1989. Are we there yet?

It is in the final section of the book, ‘The Unspeak Poems’, where Thorne’s politics and Orwellian undertones take command. We learn that General Westmoreland changed the name of an Operation in Vietnam from ‘Masher’ to ‘White Wings’ due to ‘the connotations of Violence’:

Poems on the Gulf Wars, Afghanistan, the War on Terror, Palestine continue the section. ‘Political poet’ is his badge, and Thorne wears it with pride, almost with defiance. These poems call out the hypocrisy of warring and the way it’s reported, but we never lose sight of the poetry.

It is a little surprising, then, that terms such as refreshing and exciting can be applied to a poet’s fourteenth collection, but in the case of The Unspeak Poems and other Verses such terms are entirely justified.

The collection shows that Thorne is still charting the intricate coastline of his experience decades on from ‘The Atlas’. But unlike Abel Tasman who traced only the outline of the western coast of Tasmania and who refused venture beyond the shore line for fear of giants, Thorne shows no hesitation in building layer upon layer of analysis and understanding in his charts. The strength of his fourteenth collection suggests that he has decades of blank pages yet to fill.

This entry was posted in BOOK REVIEWS and tagged Mark Roberts, Tim Thorne. Bookmark the permalink.
Mark Roberts is a writer, critic and publisher based in the Blue Mountains. He is co-editor of Rochford Street Review and, with Linda Adair, runs Rochford Press. His latest collection, Concrete Flamingos, was published by Island Press in 2016.