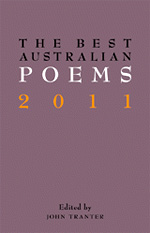 What worked for pop music in the 1970s does not necessarily work for poetry – especially as we enter the second decade of the 21 century. But that’s not to say it isn’t worth a try and Black Inc. has been trying for a number of years with their ‘Best Australian Poems’ series (alongside their annuals Best Australian Stories and Best Australian Essays). Indeed, Black Inc. is actually the latest in a long line of publishers who have had a go at producing a yearly ‘poetry best of’. I have fond memories of the Philip Roberts-edited (no relation) Poet’s Choice, published by Island Press, which ran a yearly anthology from 1971-1979.

I must admit, however, that I find the ‘best of’ title a little off-putting. ‘Best’ implies an objective judgement of quality, that these are the best poems written in the last twelve months. But as John Tranter, editor for this 2011 collection, makes clear in his introduction, this is clearly not the case. In order to be considered for the ‘best of’ poets have to submit work to Black Inc. – the editor has not gone searching through journals, newspapers and bottom drawers for the elusive ‘perfect’ poem. If a poem wasn’t sent in to the publisher, then no matter how good it was it won’t appear in the anthology. Tranter also makes the point that there are reasons why poets may not submit work: ‘some poets may have missed the deadline for any of a dozen reasons, some may have chosen not to offer poems to an anthology claiming to showcase ‘the best’’.

There is also the issue of the editor’s role in selecting the ‘best’ poems of a certain year. One can assume that the 2011 collection would have been quite different if Robert Gray or Geoffrey Lehmann had been its editors rather than Tranter.

Tranter’s introduction reflects the contradiction inherent in the anthology. His tone reads a little condescending at times, as he adopts the tone of the ‘elder poet’. He introduces us to John Ashbery, ‘one of the most widely read and intelligent people in the world of writing’, to suggest that ‘there’s not much point in trying to explain how poems work or what they mean.’ Tranter then equates poems with dreams, stating ‘The dreamer is the last person to ask, which is why people who have baffling dreams often go to psychiatrists’. Perhaps Tranter is suggesting that they should write poetry instead?

Are we then supposed to allow the poems in this anthology flow over us? Marvelling at the rich imagery, being impressed by the sublime use of language, but in the end being puzzled by the actual poem itself? I’m not sure that this is the reading Tranter intended, but it is definitely implied in his introduction. There are a number of poems in this anthology that work on the level of dreams – indeed some of the best poems are complex, rich in imagery with touches of surrealism – where the overall ‘meaning’ of the poem is buried deep within itself. There are other poems, equally successful, which are relatively simple poems, where the ‘meaning’ is close to the surface.

Tranter does make the valid point that this anthology is made up of ‘fragments of dream-work’ … though I would argue that the fragmentary nature of the anthology has more to do with the fact that each poet only has one work and there is a large diversity of style and poetics amongst the assembled poems. Tone, structure meaning, even politics change in this anthology from poem to poem, poet to poet, more so than most other anthologies or even literary magazines where poets are often afforded the luxury of being able to present more than a single poem.

View all posts by Mark Roberts on Cordite →