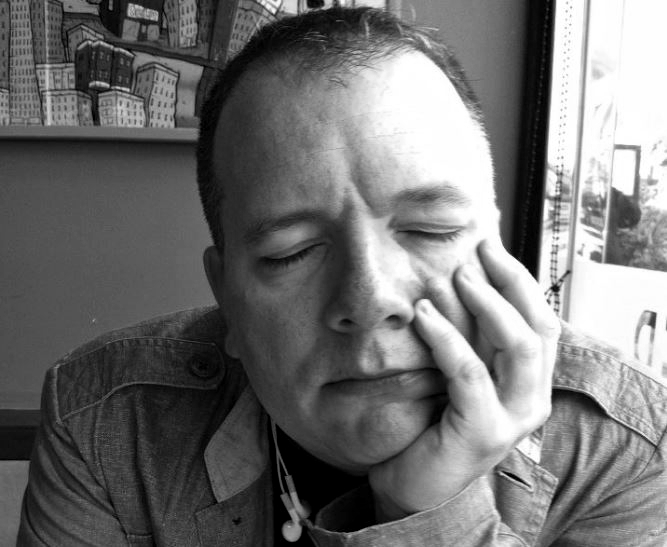 I meet Del Ray Cross – poet and founding editor of Shampoo – at a bar lounge in Downtown San Francisco, in the middle of afternoon rush hour. He orders us both a Blue Moon: an American beer served with a slice of orange. We sit at a table opposite the bar, and Cross tells me that he only started enjoying beer after a recent trip to Japan.

Cross has bought me a copy of a number of his books: Lub Luffly, Cinema Yosemite (both from Pressed Wafer), and Ein Frisches Trugbild (from luxbooks, in English, with German translations by Peter Rehberg and illustrations by Jessica McLeod.)

I ask Cross to tell me everything about it.

Del Ray Cross: I’m probably not going to be a good source of information on poetry in the Bay area; I think I have a very weird perspective on it. I see the community as made up of many pieces – of which I don’t belong to any specifically. I operate within this community at a very strange level.

Although there is one thing I do believe: from the Beats to the LANGUAGE poets, everyone who has had a strong affiliation with San Francisco has felt that they were doing something really remarkable. For instance, Jack Spicer — he is the San Franciscan poet. His is a poetics of place, but not directly. He is a San Francisco poet because he writes so beautifully. I guess all I can say is that San Francisco poetry is poetry written in this city.

Oscar Schwartz: Is it possible to define San Francisco poetry in relation to something else? Say, to New York poetry?

DRC: That’s the way that I thought about it when I was first delving into poetry, and voraciously reading it. I was trying to figure out what was going on before deciding where I stood.

That being said, there is a nice cache if you write on one coast and go visit the other – or if you relocate from East to West, like I did. At first I was an East-coast poet living in San Francisco – people somehow thought that those two years I spent in Boston made me a Boston poet. And then I’d go back East and suddenly I was a West-coast poet visiting the East coast. I had the best of both worlds.

I don’t think there is a simple divide that works in that way though. More important divides occur in different areas beyond the geographical. The location of poetry as it is written is a super big deal – there is a poetics of San Francisco and there is a poetics of New York – but it’s a bit crass to try and live by a divide like that.

I do remember a time in which my peers and I formulated some strong opinions about what we perceived San Francisco/New York divide was. We offered our solution to it. We decided that humour had been something that San Francisco appeared to miss. Not like a nerdy, LANGUAGE poetry humour (I can do that – I’m probably more nerdy than anything else), but a humour that is concerned with real stuff and real feelings that relate to me.

In recent times, this has changed completely. The New Narrative folks writing out of San Francisco definitely have that humour: Robert Glück, Kevin Killian, Dodie Bellamy, Kathy Acker. (I may be misaligning people.) Especially Kevin and Dodie. That’s their thing: fucking with genres. They write about real people and real things. But still, there is this very interesting distance. Everybody has a different way of distancing themselves.

OS: How do you distance yourself? And how does that relate to your sense that you don’t ‘fit in’ to any specific category as West Coast/East Coast poet?

DRC: I’ve often felt that I am a New York poet, despite the fact that I’ve never lived there. Or maybe I just feel out of place. But maybe that’s not a bad place to be?

If I really think about it, I have such strange poetry relatives: Kevin Killian, Leslie Scalapino, Lyn Heijinian, Ron Silliman, the whole Grand Piano group – so I was into LANGUAGE poetry. But still, O’Hara remains my hero. I don’t know what brought me here, to O’Hara, though. On a philosophical level, a poet like Ginsberg makes a lot more sense to me. But as far as my poetry goes I’d like to say I’m a lot more like Frank. Though not quite that sad. Oh, it’s not sad, is it? It is gorgeous.

Pages: 1 2 3 4
This entry was posted in INTERVIEWS and tagged Del Ray Cross, Oscar Schwartz, Shampoo. Bookmark the permalink.
Oscar Schwartz is a Darwin-based writer and poet. His most recent book is the The Honeymoon Stage.

One Response to Cross Country: An Interview with Del Ray Cross