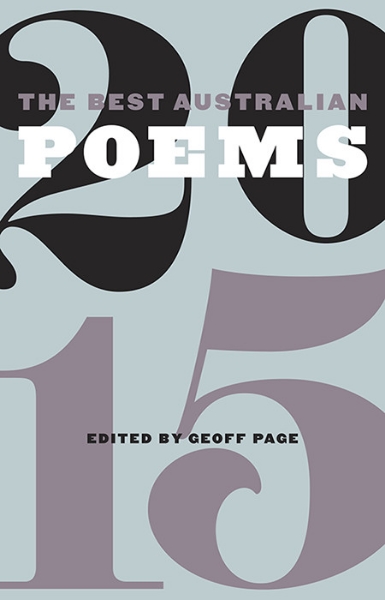 Australian poetry, and indeed poetry in Australia, always seems to be undergoing something of a personality crisis. From the bush ballad to Angry Penguins and beyond, Australians have a knack for producing poetry, and a unique language from which to create it, but it’s a cottage industry. Even ‘industry’ seems too strong a term for what Australian poetry produces, though we have (and have had) no shortage of skilled writers working at various levels of poesy and doing remarkable things.

To some outsiders, the sheer volume of Antipodean writers, musicians, artists and filmmakers being unearthed by the information-glut of the tech age may seem surprising, but the wealth of ennui and artistic drive seems to have always been there, since our fractious beginnings as a colonial land (and doubtlessly earlier).

As the cover blurb spouts, with Best Australian Poems 2015 we have ‘a who’s who of contemporary poets and the pick of new voices’: a list including honest-to-goodness one-hit wonder Joe Dolce, and Clive James (as seen on TV!), whose musings on inevitable death are tempered with she’ll-be-right sugar and spice. It’s almost a shame, in light of this, not to see John Laws using subtext to spruik oil while outwardly lamenting some titular maiden. Rodney Rude, perhaps? Or Kevin Bloody Wilson, even, musing on Summernats?

Instead, bursting through the pack we have Gig Ryan, one of the strongest poetic talents this country has ever produced. Ryan’s poems are uniquely Australian, without smacking of slang or hat-tipping to obvious cultural hot buttons. In ‘Party of Thieves’, we see her at her insulated best, revealing objects and pronouns in flashes – stringing them together in a way as to offer or suggest a narrative.

Someone was having a go at her,
those milksop tendencies crossing the boundaries
of the attenuated party

The poem smacks of the slow and sinister, that quiet friend you know could snap any second, which is something that Australia’s best art has adeptly handled in the past. Someone ‘having a go at her’ is a very ‘Aussie’ way of making a threat or a call to account. Is it just a jibe? We never know. And ‘she’ with her ‘milksop tendencies’ seems frightened, at this ‘party’ – a shrinking violet amongst the lantana. The title and the opening lines render an image that is familiar and palatable, then just when we’re getting comfy, the poem moves into a barrage of words too fragmented to access in a classical A-to-B interpretation of ‘narrative’. This approach to writing, of deferring sense, of tantalising with detail and little context, is what the best Australian poetry (John A Scott, Francis Webb, John Forbes, Michael Farrell, Johanna Featherstone, for scant example) has been doing exceptionally well for decades.

What is Ryan getting at? Balloons and a totem? Are they huffing nitrous oxide? Worse? The ‘story’ we are fed disintegrates, as a real party might, as we watch on, still clinging to the ‘her’ of the opening. Though this is stifling, the words do not wholly interrupt meaning; they delay it, defer it. There is a balloon, the effects of which the ‘hosts’ seem to be in the grip of. A recessed gate, a carved totem. Automobiles rotate under glass as they (the partygoers) wilfully look stupid. Our basic rules of reading are thrown into a flat spin. In place of ordinary narrative structure, there is a music here, and a musicality to match. The half-rhyme of showroom/balloon and their easily identifiable nature helps the words slip slowly down the page for us. You may have even seen balloons in a showroom; who knows? But what is the writer telling us; where are we, really? Who is ‘she’? And in the final lines:

A clear sentence, an action, a reaction. A tricky little simile The Man on the Street might understand. Yet still, we aren’t satisfied. Sand in a bucket can be, quite literally, child’s play. There’s no mention of water, but I see it, and I see the fish, too – flapping as their world collapses. There are arrows everywhere, trail markers, pointing out the darkened paths of what we’re missing. The world is not merely represented here, it’s spoken for. It’s what we’re blindfolded and taken to see: ‘A nerve o’er which do creep / The else unfelt oppressions of this earth.’

The standouts in this selection – notably Anthony Lawrence, Fiona Wright, Ryan, Jennifer Compton – offer the connected edges of a jigsaw puzzle of contemporary ‘Australiana’ via poetic medium, but are outweighed by poems on subjects such as air travel, parents, tourism, health, refugees and other subjects that sound more like parliamentary portfolios than poetic fuel.

But this book, as the press release makes sure, is for all and sundry, those unsatisfied book fiends skulking the shelves for the pure literary junk. Poems of this calibre are here too, thankfully. Luke Beesley’s ‘A Thousand Characters’ artfully jumps out onto the page like a broken diorama. Joan Kerr’s ‘3 poems’ is all graceful lilt, sharply executed. David Brooks’s ‘The Gate’ is a lesson in menace and the modern Australian pastoral. Sydney poet Fiona Wright’s ‘Sweet Potato’ is a delightful iceberg of a poem, serving up what seems to be one side of an overheard conversation.

Any reader can pick up the basics of what’s going on even with the absence of direction. What sounds like one side of a phone call is transcribed, and we’re there listening in, while disappointing sweet potato is plopped at our table, those jellybeans appearing on the other side of the office, taken away as if for punishment’s sake. There is action behind the slick rundown of objects and their movements. There is anxiety, too – ‘I’m trying to be good’, and we’re trying, we all are, and we’ve all heard this conversation, intended for our ears or otherwise. Wright manages with ‘Sweet Potato’ to get inside a truly Australian moment, and a universally human moment, chatty confidence charred with a deathly fear of failure. The brightness of jellybeans, the sticky, steaminess of roast sweet potato. Food and diet is a dull subject most often spooned out by magazine writers for glossy weeklies. Wright handles it with aplomb, thawing out a jumble of what the magazines might say, while undermining their efforts, sucking the poison from the wounds made by such market-friendly use of similar wordplay.

Poems of this calibre are not so much lacking in Best Australian Poems 2015, as they are under-represented. The main fault of this seems to lie with the editor’s decision to curate largely to ‘those who may read poetry from time to time, but have no particular commitment to it’: the poetry-hungry consumer looking for a good starting point for reading contemporary Australian writers. In my opinion, if this selection had been a true representation of Australia’s best poems of the year, that altruistic aim would have been better served.

Pages: 1 2
This entry was posted in BOOK REVIEWS and tagged Fiona Wright, Geoff Page, Gig Ryan, Rob Wilson. Bookmark the permalink.
Rob Wilson is a scholar and poet from Connecticut and the Pacific Rim. He now works in Santa Cruz, California — writing on the edges of all this transpacific beatitude and 'busy being reborn.' A Chinese translation of his serial poem When the Nikita Moon Rose recently appeared in Malaysia and a set of Hawai’i-based poems appeared in Jack London Is Dead edited for Tinfish by Susan Schultz.