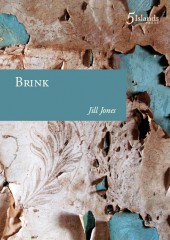 It’s a neat twenty-five years since Jill Jones’s first book, The Mask and the Jagged Star, was published and in that time she has built for herself a reputation as a serious and ambitious poet whose work demands, and generally rewards, close reading. She is certainly not a poet of easy gestures or flashy effects.

As with Jones’s earlier collections, Brink is not a book to be turned through quickly in a coffee bar (though this may well be a good place to take it in slowly, to let yourself be absorbed in its world despite the incidental hubbub around you. It’s divided into three sections which share overlapping concerns and techniques. There’s a recurrent preoccupation with weather (indeed, climate change) and with language, its quirks and difficulties which she often, with varying success, embodies in the poems themselves.

‘The Lagoon’, the collection’s third poem, is reasonably typical of the book as a whole and has the tones of desperation and urgency that are detectable throughout. ‘The names of the gods are in the clouds,’ says the narrator, ‘and on each numberplate. / I’m counting on you wherever you may be … / Lists extend from scraps / and packages waterlogged with the moon. / The car tyre is without companions. / The lake sings a little. My consonants drown.’ Despite the negatives of the details (‘scraps’, ‘packages waterlogged’ and an abandoned ‘car tyre’) there is also a strong urge towards lyricism — literally in the case of ‘The lake sings a little’.

In a sense, ‘The Lagoon’ is also a political poem, almost an activist one, but subtle nevertheless. Its main intention is to generate a disturbing, even disorienting mood rather than to mount a case. Jones is not concerned with a line of argument from line to line but rather with the poem’s final effect.

‘Fruit’, another early poem in the book, seems at first reading an orthodox ‘nature’ poem in praise of fruit bats. As its fourteen lines of blank verse develop, however, it’s plain that the narrator doesn’t know as much as she feels she ought to about the bats and is slightly nauseated by them. Their noise is a ‘painful ache’. In the sonnet’s sestet, the implications broaden. The bats become emblematic of loss, all kinds of loss (‘ “I have to go” and people go. I have gone. / One day I shall already be gone.’) The poem ends nevertheless with a defiant optimism: ‘But the tree / still breaths, kerchak kerchak — bats / feeding their god in the guttural dark’.

At times throughout Brink, especially in poems such as ‘Speak Which’, Jones pushes her sense of what language can (and can’t) do to the limits. Syntax is contorted or suspended. Words operate as single, freestanding units. Punctuation is left to the mind of the reader. If all poetry is an attempt to ‘speak the unspeakable’ — or ‘eff’ the ineffable — Jones’s poetry in ‘Speak Which’ is an extreme example. ‘form / is tested / as leaves fall // not itself / but what it / does // shapes in / the mind breath / unsaid // don’t say / never trees move / fates // water / sings on / consonants and grain …’

The enjambment here is extreme and at times reminiscent of the more philosophical poems of William Carlos Williams. The short lines are an attempt to slow the reader down and make them think about what is not being said as well as what is. The poet could write ‘don’t say never’ and ‘trees move fates’ but it’s significant that she doesn’t. Some readers may be impatient with such niceties but they would be foolish to dismiss them as needless.

Quite a few of Jones’s poems in Brink also have a dystopian context, seemingly brought about by climate change (and related events). They can be almost scary but they are not without positivity too. A good example is ‘Our Epic Want’. Near its beginning the narrator says ‘We were somewhere in the torn fabric, parting the seams. / We’d given up on claustrophobia.’ Later ‘We found a world of foam and fug and acetylene. // The rain rattled us but it was the wrong size, too big, too grey. / There was nothing between it like love or even its simulacra.’ Despite all this, at the end of the poem the narrator and her companion are still walking: ‘We’d dreamt of last things first, getting behind ourselves, like an urge, or a fault. / But there was plenty more, and we still had the air around our skin.’ Some may find the last line ironic but I prefer to see it as optimistic (or at least courageous).

Poems like these (and there are a number of them) are certainly admonitory but they are far from the overly-insistent fulminations that disfigure much ‘environmental’ poetry essaying similar objectives.

More directly enjoyable perhaps is the small scattering of love poems recurring throughout. One of the most memorable is the collection’s antepenultimate poem, ‘More Than Molecules’. Derived from Catullus 48, ‘More Than Molecules’ is a loving and delicate balance between the physical and the metaphysical. Its middle stanza (of three) is worth reprinting in full.