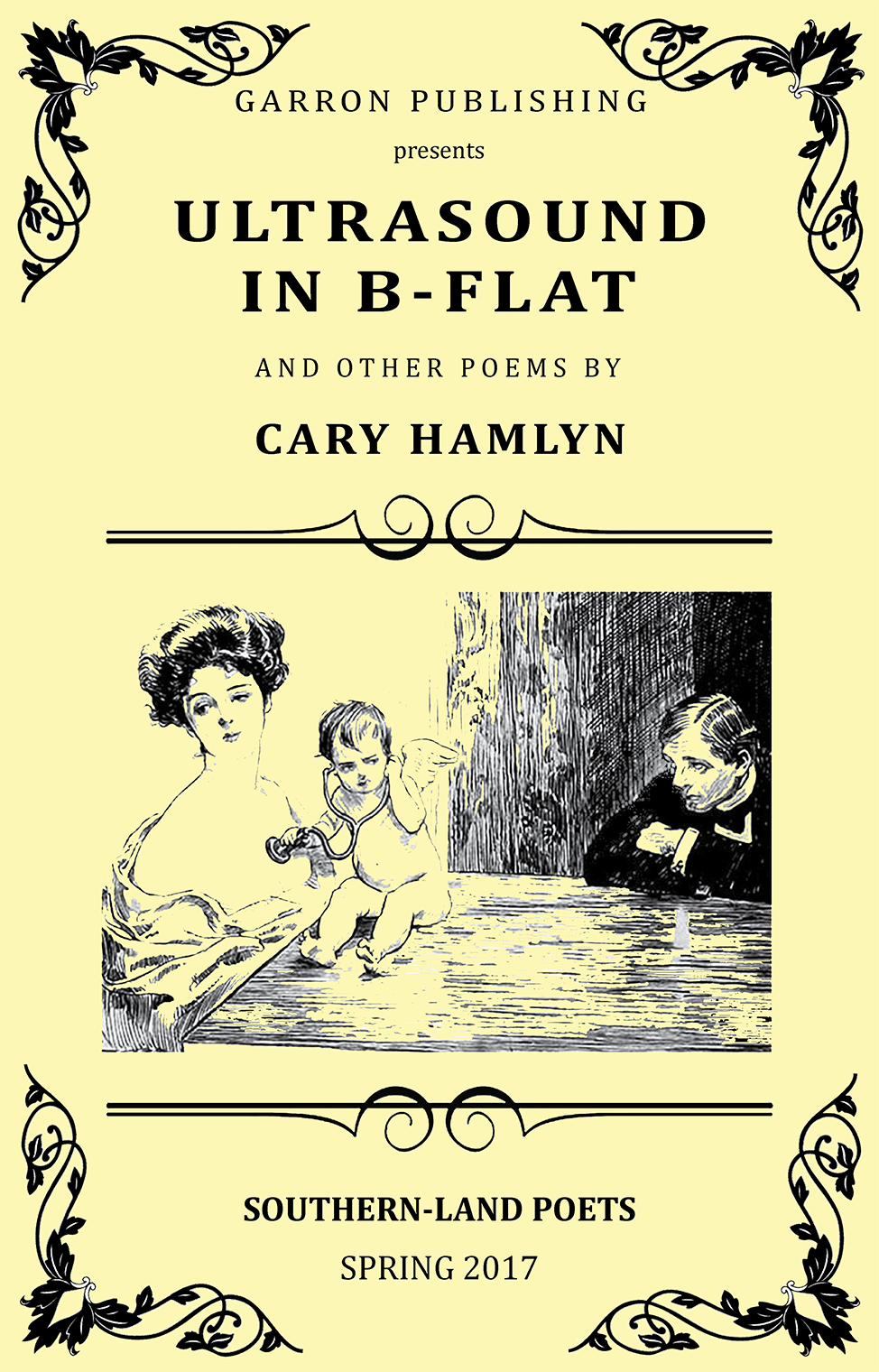 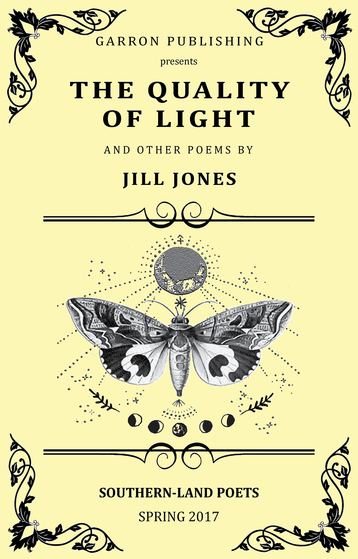 Ultrasound in B-Flat and Other Poems
by Cary Hamlyn
Garron Publishing, 2018

The Quality of Light and Other Poems
by Jill Jones
Garron Publishing, 2018

In Jill Jones’s collection, The Quality of Light and Other Poems, ageing, mortality and memory are intensely private experiences that expand like ‘the nerve system of creeks leading into / the Torrens, or the oily wash / of Sydney Harbour’ to planetary dimensions, enfolding animals, city roads, streets, flowers, plants, bees, the skies and the galaxy into the rich particulars of its vast realm. Jones’s superb collection reinvigorates poetry as a quality of illumination amidst all kinds of opacity, sparking affective and rhythmic conversations between literature, politics, ecology and cosmology. Her poetry engages and enacts what T S Eliot called the ‘auditory imagination’, ‘the feeling for syllable and rhythm, penetrating far below the conscious levels of thought and f eeling’. Deftly elliptical, suggestively insistent, and exuberantly introspective, The Quality of Light articulates the pleasurably enigmatic rhythms, tones and cadence of urban and modern existence.

An exemplar of poetry as practice, her collection recalibrates and proliferates our ways of seeing. Jones’ poems strike me as intensely democratic in effect and highly controlled in technique in its complex conjuration of spontaneous images as though independent of the poet, who becomes, in the process, one of the poem’s readers, acted upon and actively engaged in the practice of interpretation. In the opening poem, ‘The Quality of Light’, she writes: ‘the atmosphere, the clouds / I can see, any day I look up, are / there, and changing there / with or without me. With or / without me writing as though / they are there for me. / But I’m not there, in the letters / though I may scribe them’. She continues, ‘Luminosity perhaps is a dream, / like travel, building, or words. It all / comes and goes, it is / as if it’s happening…’ With characteristic elusiveness, Jones’s opening poem announces and enacts the collection’s process of seeing and interpreting images, memories and ideas in their slippery (re)creation, emphasising writing as inherently a form of active (readerly) participation.

There is so much here to explore. In the poem, ‘Wrack’, varied repetition and compressed, internal rhymes, which at times recall the characteristic style of American poet Kay Ryan, playfully perform and aggressively capture the ensnaring opacity of discourse: ‘it’s all brooding wrack or media flack, the rain / that never rains will rain and no attempt at / political hack will stop the weathering of weather / the tide comes, it’s not going back’.

Her writing communicates a profound ambivalence, expressing any emotion, state of being, sense of beauty, wonderment and imagination with measured equivocality. In this sense, Jones’s poems are imbued with emotional naturalism; her elliptical language but clear tone dexterously capture and engage but do not resolve or reframe life’s hard won and hard-battled ambiguities and complexities. The poem ‘Swoop’ sketches the spontaneous, raucous discordance and harmony of urban life without judgment: ‘leaves break in your hand, wing swoop / syncopates / blues of the galaxy / huge chords rush outside, rain, trucks / hard dreams / three stars in a pool / the grass shivers’.

One of the most mesmerising pieces in her collection, I think, is the poem, ‘Bitumen Time’. It evokes the familiar, yet profound, intangible exhilaration and melancholy of the journey home at night time. The run-on rhythm of dependent clauses is painfully staggered by pensive, insistent commas to create a sense of digressive relevance, a sense of the universal pull of ‘birds’, ‘bitumen thing’, ‘times, places’, ‘sounds that curve’, ‘roses…stripped/of winter colour’. With language and tone that blend enigmatic existential wonderment, the vagaries of memory and the crucial clarity of feeling, Jones asks: ‘[W]ho am I among/scent of this night flowering in dead arms of winter’? The poet’s language and pacing exert the central pull of the poem as though coming from forces beyond its control, what we cannot see but sense and experience as the subjective, invisible violence of humanity, of time, of systemic opacity, of collective, cumulative destruction, ‘…as though history ramps into/the moon’s famous indifference, the sky’s / night version of real things that hold into/strange corners, so help me, help me, / it’s transparent, but so alien, all these stories’.

Similarly, ‘The Vertigo Blues’ enacts a certain belligerence of fact, a fatalism that embraces both tragedy and beauty: ‘What makes it so / difficult is also what keeps me here, still. There are / silhouettes above my heart, a brace of baggy riffs / two-timing below.’

An intensity of tone at the heart of each masterfully crafted poem – ear, substance, subject matter, images and music deliberately, cautiously, vigorously consorting with each other –illuminates and intricately unravels our blinkered order of things. This, for me, is the pleasure of reading Jones’s beacon of a collection again and again.

The stand-out piece in the collection for me was ‘Rozelle Boarding House for Sailors’, which cleverly engages the conspiratorial atmosphere and architecture of the haunted boarding house to convey the sense of the resurrection, renovation and reclamation of histories through storytelling: ‘In each single room their lives unwind, / each a story spun within a story – / as if every old tragedy or joy / were reinvented by the next man,/their thousand lost ships/still silently listing under our beds.’ The story of masculinity here is a poignant and complex one; the voiceless anonymity of the lives of the drowned sailors distances and abets their poetic (re-)construction, thus carrying with it an expressively equivocal force.

Perhaps less successfully, Hamlyn’s other poems at different points explore the theme of violent or predatory masculinity. A poem about a Lothario, drably titled ‘Preying in the ‘90s’, describes the said predator with unwieldy lines like ‘scoring women on a bell-curve / of ‘hotness’ and potential sizzle – / the Big Bang had nothing on him.’ Like some others in the collection (‘Post-Skirmish’, ‘Arguing with an Ex-Lover’, ‘On Meeting an Old Flame’), the title also seems unnecessarily prescriptive and adds further perfunctory framing to the poem’s meaning.

Pages: 1 2
This entry was posted in BOOK REVIEWS and tagged Cary Hamlyn, Jill Jones, Ling Toong. Bookmark the permalink.
Ling Toong's poems have appeared in Dash Literary Journal, the Quarterly Literary Review Singapore and Paradise Anthology. She is a recipient of the 2018 Felix Meyer Scholarship in Literature.