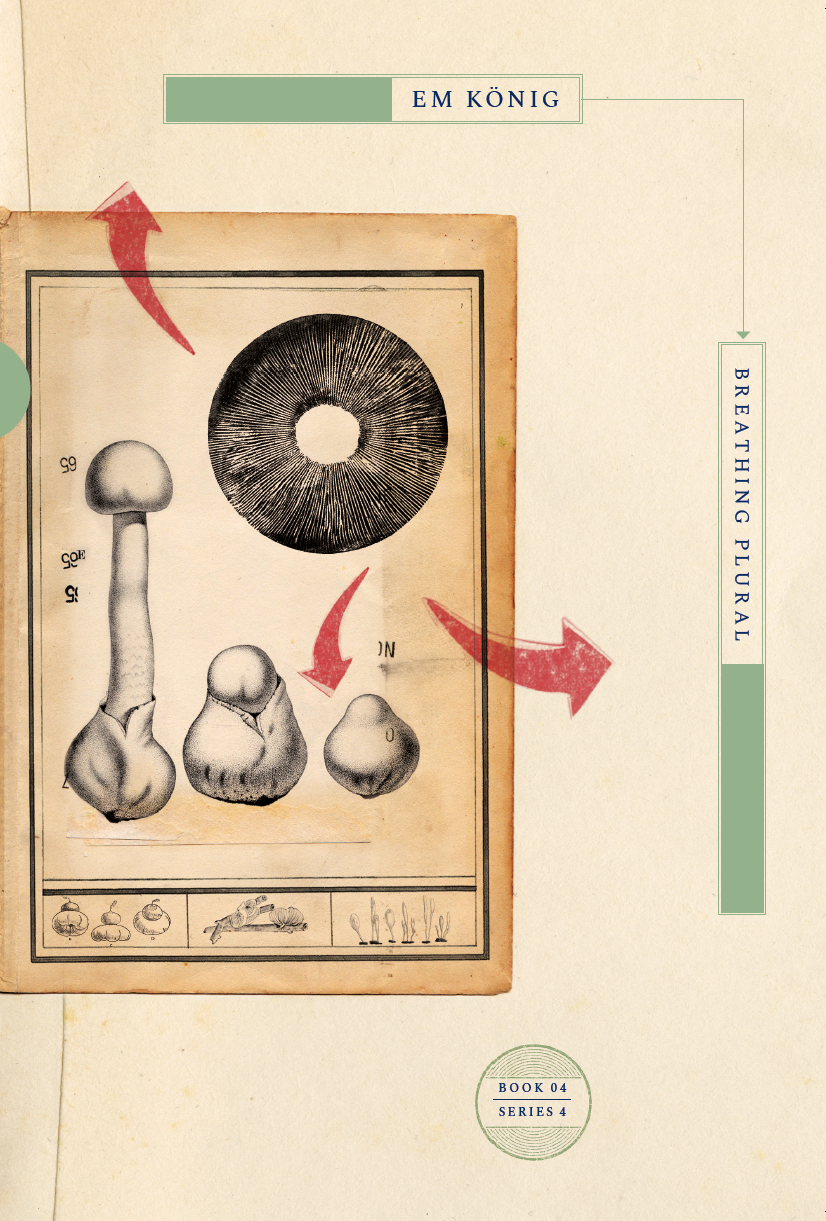 Will we miss nature, asks Em König in Breathing Plural? In ‘dreams of stale breath’, maybe. Or ‘in another life, on another planet … maybe’ (echoing The Only Ones’ only hit). Glenn Albrecht says in Earth Emotions, ‘It [nature] effectively no longer exists’. We know, and it’s not a recent problem. Timothy Morton’s 2007 book was titled Ecology Without Nature. Gary Snyder’s 1992 new and selected was called No Nature. Bill McKibben published The End of Nature in 1989. Just for starters.

Em König knows this relationship is/was the difficult one. So how can we humans mourn or acknowledge the break, the loss? To feel it as lovers do, as mothers and children do, as friends and companions do. Because we are breaking up with nature, they say in ‘Dear Nature’. And Nature is breaking up with us.

Thankfully, König’s Breathing Plural is not disaster chic, nor is it wilderness kitsch. I don’t want to burden the book with a label such as queer ecopoetics (but there, I said it) but for König, no one is one, things aren’t straight, and neither, obviously, is the planet. We exist in multiplicity. So this book might also be asking, is the poem splitting up with Poetry, or with the page, or the single readerly eye, the single poet’s voice? What might this mean, especially now in the climate and virus emergency, to compose or recompose, to decay or adapt?

This book’s queerness is queer in structure, not just content. It queers edges rather than flirting with centres (there is flirting in it, by the way). It’s unstable, multiple and accessible in the way you can read it anyway you like, backwards, upside down, pick ’n’ mix. You only have to open it to see that. In it, form disrupts the normal, the expected, sanctioned ways of reading, and disturbs hierarchies of long and short, front and back, as well as top and bottom, dare I suggest, in various senses. König places poetry’s upside-downness literally on the page. These effects haunt the book through iteration, erasure and doubleness as its words multiply, diminish and spawn across and around the pages.

This generative and fluent (even effluent) work also traverses bodies, inside them as well as outside, from permed hair to arsehole, wet spot to herpes blister, as well as through grounds and positions, over terrains as diverse as a club, a bed, an outback town, a London street, the Adelaide suburbs, the banks of Karrawirri Parri (the Torrens River).

It’s a book you can do things with and one you can also do things along with. You could read it in self-isolation, on the bus, during sex, or on a walk, say, by the Torrens. It’s a book you can make into another book, taking apart its language as König does, to see how it fits, falls, fucks, tumbles and mulches with other things. Try it.

König’s queer decomposing always leads to something new and shows us that our self-composition is more than simply identity. Who we are is part of ‘we’ as well as ‘I’. These poems enact entanglements with things/beings, with desires and unnatural natures, what’s happening in neglected places, the cracks (including the body’s cracks), as well as our mundane rooms and houses.

Breathing Plural is bracing, sometimes scary, camp, funny, vulnerable, angry, ironic and tender. It’s the breathing work of poetry and you need to read it, whoever your ‘you’ is or is becoming, in whichever way the all-that’s-you choose.

This entry was posted in INTRODUCTIONS and tagged Em König, Jill Jones, Kent MacCarter, Zoë Sadokierski. Bookmark the permalink.
Jill Jones was born in Sydney and has lived in Adelaide since 2008. Recent books include Wild Curious Air, winner of the 2021 Wesley Michel Wright Prize, A History Of What I’ll Become, shortlisted for the 2021 Kenneth Slessor Award and the 2022 John Bray Award, and Viva the Real, shortlisted for the 2019 Prime Minister’s Literary Award for Poetry and the 2020 John Bray Award. In 2015 she won the Victorian Premier’s Prize for Poetry for The Beautiful Anxiety. Her latest book is Acrobat Music: New and Selected Poems, published in late 2022. Her work is widely published in Australia and internationally and has been translated into a number of languages, including Chinese, French, Italian, Czech, Macedonian and Spanish. She currently writes and teaches freelance, and previously has worked as an academic, arts administrator, journalist, and book editor.


More by Jill Jones on Cordite Poetry Review →
Em König is a queer poet, musician, performer and creative writing PhD candidate at the University of Adelaide. His work can be found in Meniscus, SWAMP, Malevolent Soap, Pink Cover, On Dit, under floorboards, in closets and drowning in the rising ocean. His debut chapbook, ‘Lightly, on the Skin’, was released in December 2018 through In Case of Emergency Press. He is one half of electronic music/performance duo Winter Witches.


More by Em König on Cordite Poetry Review →
Zoë Sadokierski is a Sydney-based designer and writer. She has designed more than 250 books for various Australian publishers, and is Vice President of the Australian Book Designers Association. Zoë lectures in the School of Design at the University of Technology, Sydney, where she runs the Page Screen research studio, experimenting with publication models for limited edition print and digital books. She also writes a column on book culture and reading in a digital age for The Conversation.