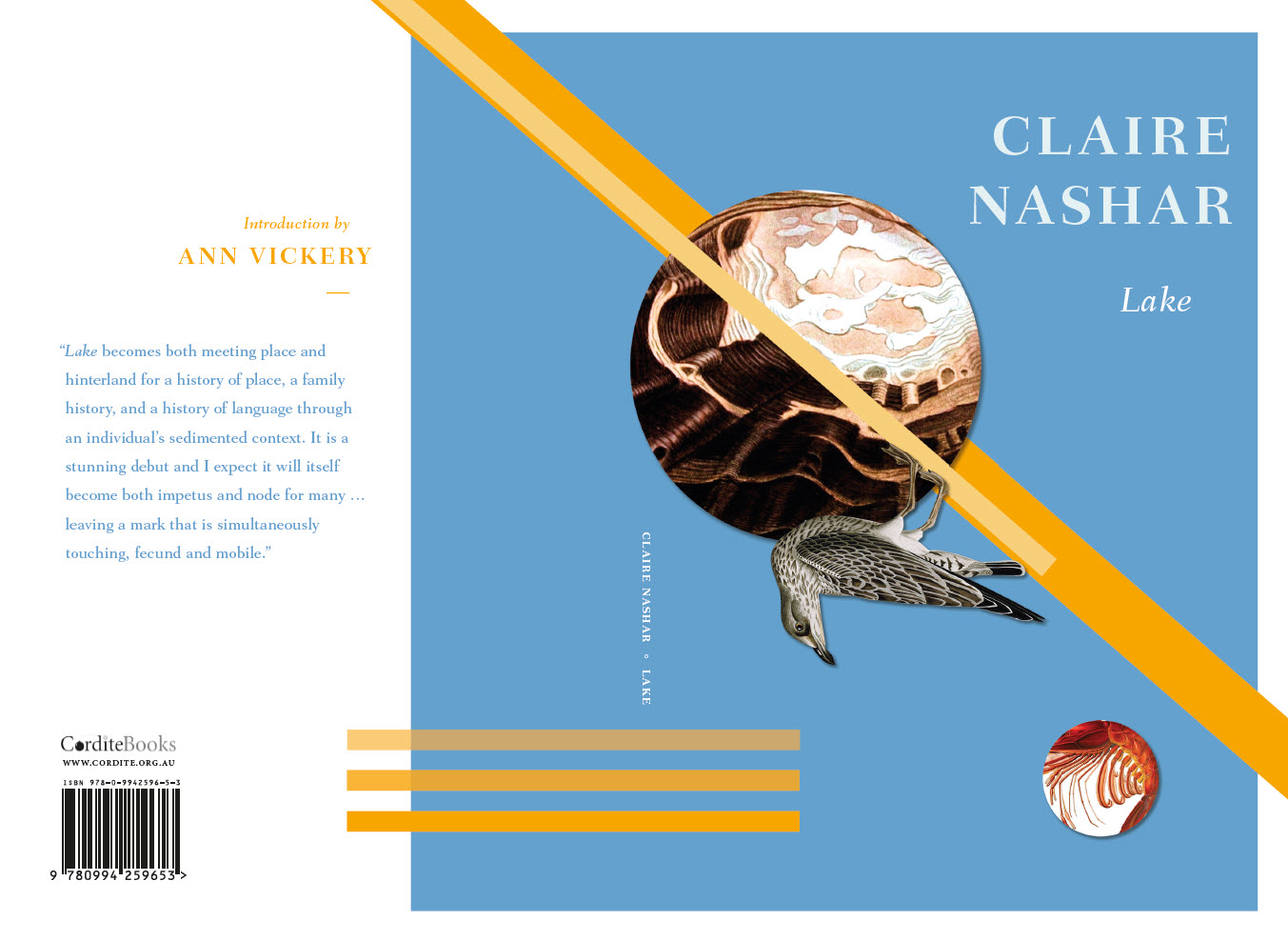 In Lake, Claire Nashar navigates the connections between people and between person and place in a striking elegy not only for her grandmother, leading geology academic Beryl Nashar, but also for Tuggerah Lake, an estuary on the Central Coast of New South Wales. Just as Beryl spent a lifetime investigating the composition of rocks, so too does Nashar explore the philological chemistry of how words, letters and space combine to make poetic form. Lake becomes both meeting place and hinterland for a history of place, a family history, and a history of language through an individual’s sedimented context. The personal here is always part of something larger, interacting within an ever-changing biosphere. Reflecting on the dynamics of composition and decomposition, Nashar considers how words, like a physical environment, are shaped by human use and how the deleterious effects of commercial fishing translate to the poem or the page. Pollution and land clearing becomes the contamination and reduction of meaning, a fragmentation or dissolution of the line. As weeds increase and slime transforms the foreshore, language becomes sluiced and dispersed, resulting in a scattering of a pluralising letter ‘s.’ Here, there is lyric impurity and erosion, but also experiment and a searching for ‘new air’. The family, like the long poem, has its inheritances but also its absences and rubble. Nashar looks at what is carried across and what is lost.

Stories, memories, and scientific theses are not discrete. Much of Lake traces how we make meaning or try to hold meaning together. Types of bird, weed and fish are grouped through family relation. Place becomes a map, a human body known through its anatomy. Punctuation brackets off parts of a line or poem, guides us towards where to take breath, and stops the reader from becoming ‘out of breath’. What is a mode of measure or enclosure, however, is undone and revealed to be morphic instrument. Following a day in the life of her family, Nashar considers how a poem, like a place, person or moment, is not reducible to an equation or box. What might be thought of as qualitatively or quantitatively known becomes a landscape of plasticity combined with dissipation. ‘[E]rasure admits an understanding of circumstance,’ says Nashar, and this is a poem where the words of a favourite poem or the memory of a particular person fails to be caught. Just as she demonstrates the slide between the human and the natural world, there is a slide in the sound between words, as remainders become reminders, ‘daughter’ is linked to ‘water’, and ‘read’ and ‘reed’ becomes interchangeable. These slippages foreground the connectedness between thing and name, act and thought.

As Nashar shows, absence is not necessarily emptiness. The blank space has echoes. Ash, too, has its bones. Not only is Beryl Nashar a part of Lake, but also Marianne Moore in Nashar’s naturalist eye and her ability to playfully open up a poem to its paratexts, like the index. Both precursors to Nashar direct our attention to layering and complexity. Lake also has resonances with Lyn Hejinian and Emilie Clark’s collaboration The Lake. It is a poem which reworks ‘much-little’ into a ‘little-much’. Return becomes a turn, a redirection. Lake is a stunning debut and I expect it will itself become both impetus and node for many … leaving a mark that is simultaneously touching, fecund and mobile.

This entry was posted in INTRODUCTIONS and tagged ann vickery, Claire Nashar, Kent MacCarter, Zoë Sadokierski. Bookmark the permalink.
Ann Vickery is Senior Lecturer in Writing and Literature at Deakin University. She is the author of Leaving Lines of Gender: A Feminist Genealogy of Language Writing (2000), Stressing the Modern: Cultural Politics in Australian Women’s Poetry (2007), The Complete Pocketbook of Swoon (2014), and Devious Intimacy (2015). She co-authored The Intimate Archive: Journeys through Private Papers (2009) with Maryanne Dever and Sally Newman, co-edited Manifesting Australian Literary Feminisms: Nexus and Faultines (2009) with Margaret Henderson, and co-edited Poetry and the Trace (2013) with John Hawke.


More by Ann Vickery on Cordite Poetry Review →
Zoë Sadokierski is a Sydney-based designer and writer. She has designed more than 250 books for various Australian publishers, and is Vice President of the Australian Book Designers Association. Zoë lectures in the School of Design at the University of Technology, Sydney, where she runs the Page Screen research studio, experimenting with publication models for limited edition print and digital books. She also writes a column on book culture and reading in a digital age for The Conversation.