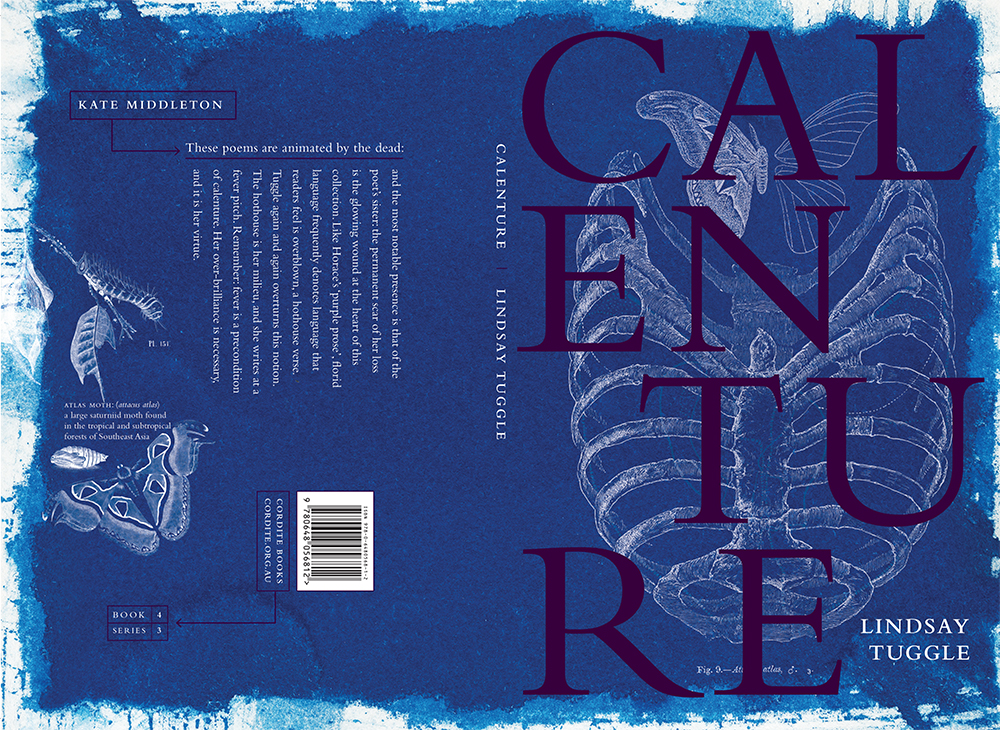 Lindsay Tuggle’s poetry is uncomfortable to read: the discomforts one feels in reading her work are the very thing that make it memorable. At once immensely personal, ornate, and unapologetically embedded in female experience, it is a style unconcerned with irony or terseness. It is a verse informed by the still-alive alternative histories of the American South and haunted by the Southern Gothic literature that these histories inform. It is also informed by the Gothic that comes to us from north of the Mason-Dixon Line: a world of autopsies, of madhouses, the weird souvenirs of books bound in human skin.

Tuggle’s is a poetry that emerges from a state of being between. She writes her American experience from Australia: a psychic distance that allows her to look at her subject with a clear eye. As an American, Tuggle observes that Australia is not immune from revisionist histories, and the sense that many among us live in an alternative present. She shows us how to traverse this ground.

The title of this collection refers to a misapprehension of one’s surrounds: the sailor feverishly believes the open sea that surrounds him is solid ground. He jumps overboard, only then learning the truth. The sailor’s experience of calenture is, like Tuggle’s verse, an overlay of an alternative present on immediate terrain. The green land the sailor sees on the surface of the ocean is the mind’s deadly trick in dealing with a no-longer sustainable present moment. Her verse uses elegy as a form of resurrection: that resurrection is a way to more truly unveil what is unsustainable.

Tuggle’s work proposes that we need a poetry of women’s bodies: not solely the female body as object of desire, or the female body as motherly (a vessel already frequently found in poetry both old and new) – but also a poetry of the misuses of the female body, and what occurs between states. Tuggle writes, ‘she’s prettier now / in coffined silhouette’. She writes, ‘The explosion that is my face / always was political’. She writes, ‘We are all flesh / toying architecturally with bone’. Her poetic autopsies go beyond the prettiness of a dead girl’s face, the living girl’s face, and gets into architectures physical, psychic, personal and cultural.

These poems are animated by the dead. The most notable presence is that of the poet’s sister: the permanent scar of her loss is the glowing wound at the heart of this collection. The poems that result from such a wound reflect a state in which the keening necessitated by this loss may never end.

In ‘Asylum, Pagaentry’, the asylum of history disallows the ‘florid stutter’ of the female sufferer, the keener. In contrast, Tuggle’s poetry demands this stutter. ‘Florid’ is a word that is often used to undermine the value of language: like Horace’s ‘purple prose’, florid language frequently denotes language that readers feel is overblown, not commensurate with its subjects. It is a hothouse verse.

Tuggle again and again overturns this notion. The hothouse is her milieu, and she writes at a fever pitch. Remember: fever is a precondition of calenture. Her over-brilliance is necessary, and it is her virtue.

This entry was posted in INTRODUCTIONS and tagged Kate Middleton, Kent MacCarter, Lindsay Tuggle, Zoë Sadokierski. Bookmark the permalink.
Kate Middleton is an Australian writer. She is the author of the poetry collections Fire Season (Giramondo, 2009), awarded the Western Australian Premier’s Award for Poetry in 2009 and Ephemeral Waters (Giramondo, 2013), shortlisted for the NSW Premier’s award in 2014, and Passage (Giramondo, 2017).


More by Kate Middleton on Cordite Poetry Review →
Lindsay Tuggle’s poetry has been featured in many literary journals and included in the Hunter Anthology of Contemporary Australian Feminist Poetry (forthcoming 2016). Her scholarly research on intersections of literature and science has been widely published in academic journals and edited collections. Her first book, The Afterlives of Specimens, is forthcoming with the University of Iowa Press in 2017. In 2013, she was a Kluge Fellow at the Library of Congress in Washington DC. Her work has also been supported by grants from the Australian Academy of the Humanities and the Mütter Museum / Historical Medical Library in Philadelphia, and recognised by major literary prizes, including: the Gwen Harwood Poetry Prize (shortlisted 2015), the Val Vallis Award for Poetry (second prize 2009, third prize 2014) and the University of Canberra Vice-Chancellor's Poetry Prize (longlisted 2014). Lindsay is based in Sydney, where she divides her time between writing and teaching.


More by Lindsay Tuggle on Cordite Poetry Review →
Zoë Sadokierski is a Sydney-based designer and writer. She has designed more than 250 books for various Australian publishers, and is Vice President of the Australian Book Designers Association. Zoë lectures in the School of Design at the University of Technology, Sydney, where she runs the Page Screen research studio, experimenting with publication models for limited edition print and digital books. She also writes a column on book culture and reading in a digital age for The Conversation.