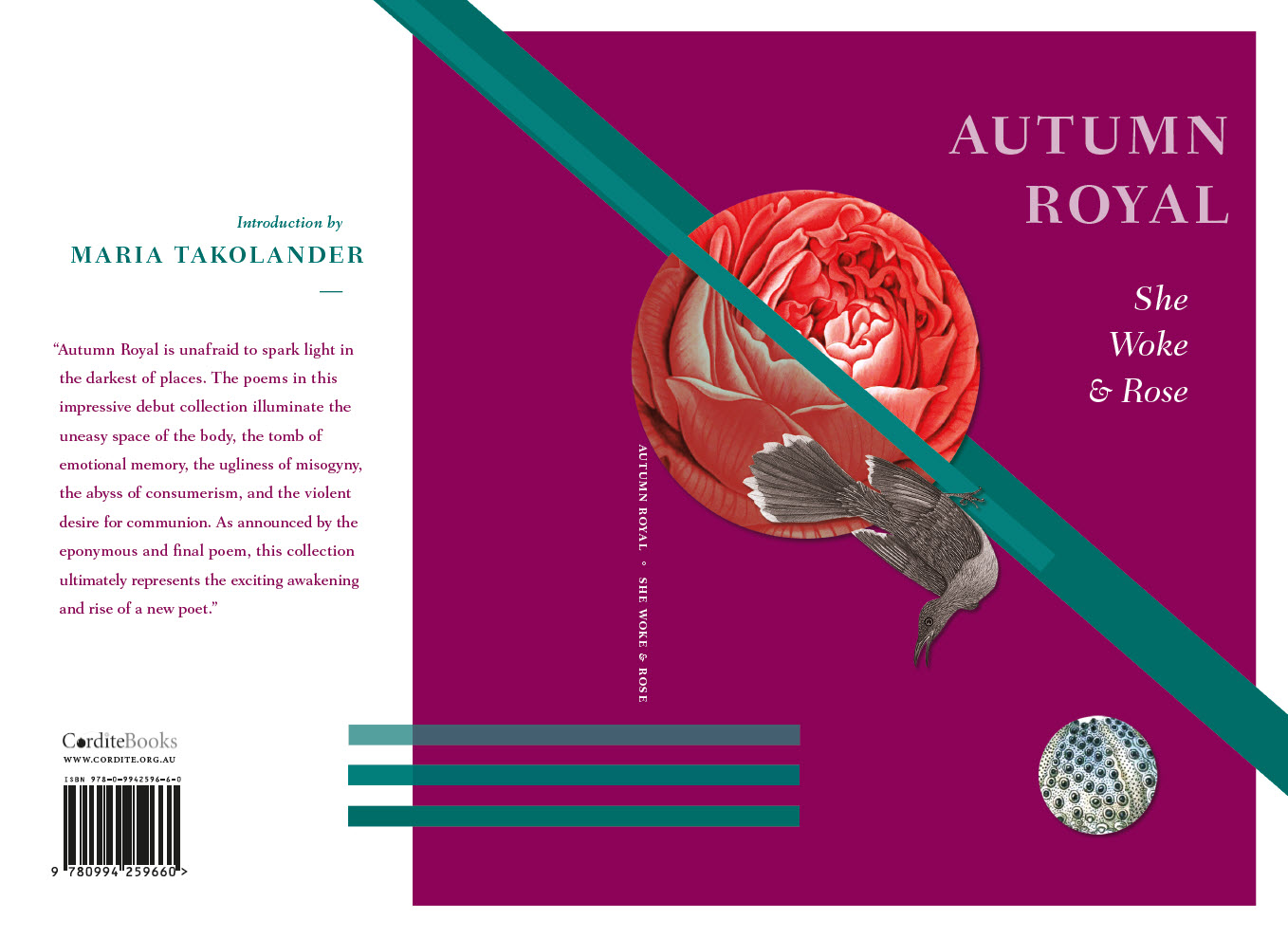 She Woke & Rose introduces us to a poet, Autumn Royal, who is unafraid to spark light in the darkest of places. The poems in this impressive debut collection illuminate the uneasy space of the body, the tomb of emotional memory, the ugliness of misogyny, the abyss of consumerism, and the violent desire for communion.

Royal may have grown up in the vast light and expanse of the South Australian outback, but her poetry is marked not only by its dark subject matter but also by the claustrophobic: the claustrophobia of being inside a skin; of being haunted by childhood memories that ‘still rumour’ despite ‘the development / of my fontanel’ (as we read in the disturbing ‘After-dinner Mints’); of domestic interiors in which gender weighs intimately and heavily; and of the straitened sphere of the intermittently employed – the poet describing herself with distinctive wit and pathos (in the superb ‘Viticulture’) as ‘casual, yet seeking commitment / like a lamb bleating against a fence.’ Perhaps most oppressive, however, is the claustrophobia of silence.

In Royal’s characteristically hesitant and unsettling verse, the poet self-consciously struggles to liberate herself into being in lyric poem after poem. Often the poet’s skin is represented in association with paper or writing. In ‘Melting Ice’ the poet is ‘blue cellophane’; in ‘Trying to Write a Romance Novel’ she is ‘the inkling of myself’. ‘In Motion’ describes the poet’s project as one of ‘opening spaces with my mouth.’

Certainly Royal is a poet who can be brilliantly ‘mouthy’ and often in a feminist mode. In the beautifully sarcastic ‘Mirror Stage’ – the title a nod to psychoanalyst Jacques Lacan’s theory of identity formation – we read: ‘I open my mouth to create a new void … somewhere down below, perhaps it’s that endless / pit you eagerly spoke of as I sat on the bed / adjusting my thighs to ease boredom.’ ‘Hey Lady’ – heir to Sylvia Plath’s ‘The Applicant’ – riffs on the epithets associated with femininity, rejecting the ‘space for miss’ available on a form.

Thus Royal’s poems refuse self-identification even as they seek self-expression. This is apparent in the literariness of the poet’s self-stylings (with many poems featuring citations), in the fragmentary style of many of the poems, in their wit and dynamism, and in the transformations they often thematically play out. Typically, the persona of the poet dissolves or multiplies. In ‘The Wreck & the Raft’, which rewrites a passage from John Fowles’s The Aristos and pays tribute to a poem by Judith Goldman, the poet outlines the seven women who inhabit her psyche: the pessimist, the egocentric, the observer (the one ‘writing poetry’), the optimist, the altruist and the stoic, all of them trying to ‘ignore the crying / child — conceived in the breast of the beast / staggering to carry us up the stairs.’

Royal’s poems feature dedications to other poets too, such as Adrienne Rich, Plath and Anne Sexton. Royal’s work owes much to that intimate and edgy tradition of verse, but her voice is also her own: unpredictable, startling, sometimes devastating, but never self-piteous. Indeed, to return to the ironic personae of ‘The Wreck & the Raft,’ one might say that it is the optimist who triumphs with this book. As announced by the eponymous and final poem, this collection ultimately represents the exciting awakening and rise of a new poet.

This entry was posted in INTRODUCTIONS and tagged Autumn Royal, Kent MacCarter, Maria Takolander, Zoë Sadokierski. Bookmark the permalink.
Maria Takolander is the author of three books of poems, The End of the World (Giramondo, 2014), Ghostly Subjects (Salt, 2009) and Narcissism (Whitmore Press, 2005). A fourth collection, Trigger Warning, is in press with UQP. Her poems have been widely anthologised and translated, and she has performed her poems on ABC TV and radio, and at national and international festivals. Maria is also a prize-winning fiction writer and the author of a book of short stories, The Double (Text 2013). She is an Associate Professor in Writing and Literature at Deakin University in Geelong, Victoria.


More by Maria Takolander on Cordite Poetry Review →
Zoë Sadokierski is a Sydney-based designer and writer. She has designed more than 250 books for various Australian publishers, and is Vice President of the Australian Book Designers Association. Zoë lectures in the School of Design at the University of Technology, Sydney, where she runs the Page Screen research studio, experimenting with publication models for limited edition print and digital books. She also writes a column on book culture and reading in a digital age for The Conversation.