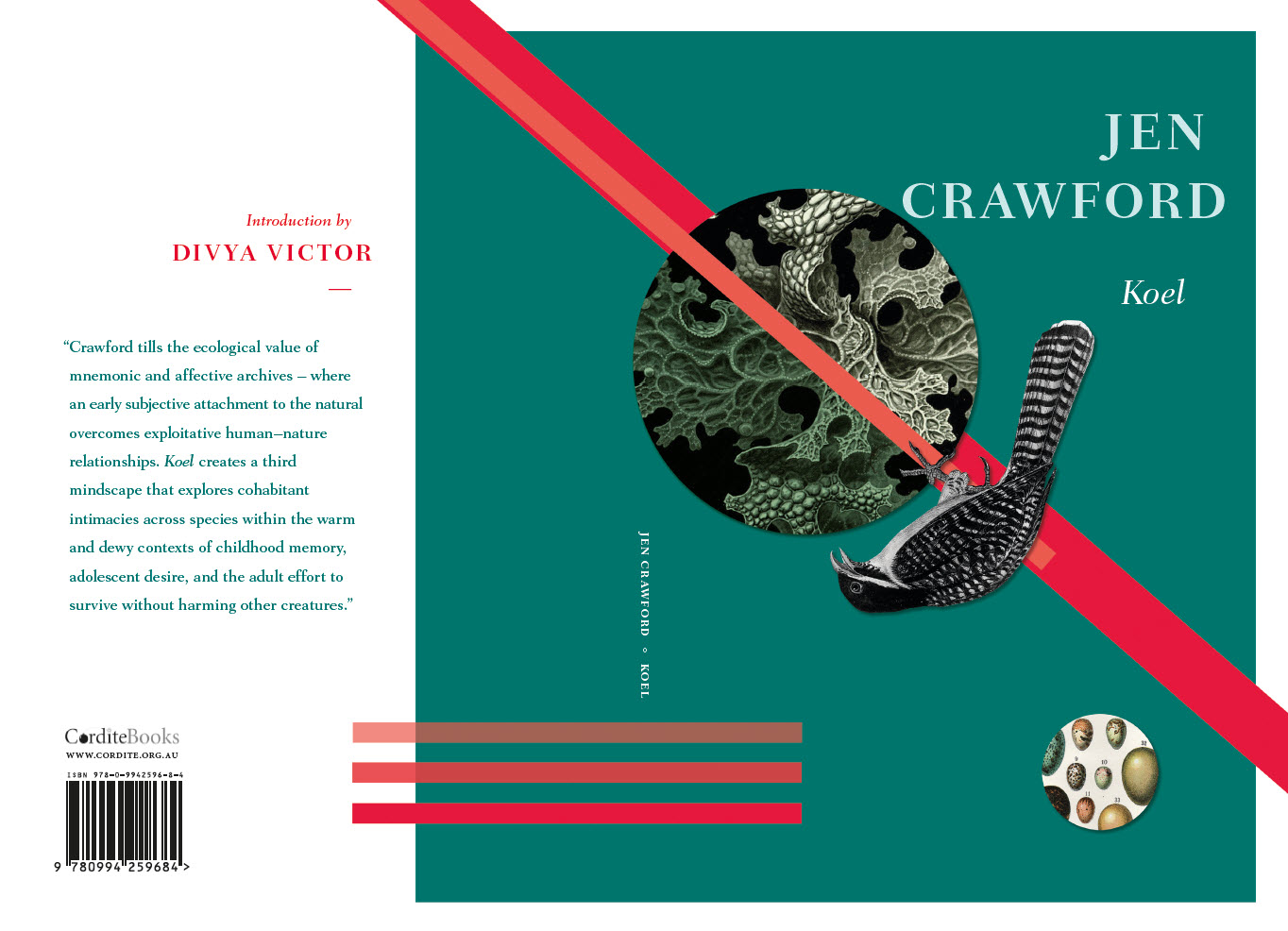 The koel is called after its call – its name is onomatopoeic, from the Greek ὀνοματοποιία: ‘ὄνομα’ for ‘name’ and ‘ποιέω’ for ‘I make’. The koel becomes itself as it sings out and is heard by a we. We, its human neighbours, find its name by listening to the lilting stretch of two plaintive notes that repeat and ascend in pitch until the whole neighbourhood pulses with its alarm – until the everyday is translated in the carousel call of the koel.

Koel tracks the fecund and chimerical crawl of life – bios – across the topography of New Zealand, Australia, Singapore, the Philippines, and into the warm terracotta of domestic spaces occupied by lovers, mothers and infants. The book offers us a phenomenological terrarium, a lush microcosm of urban and natural life that photosynthesises in the new, synthetic glass globe of late capitalism. Here, human identity grows like tangled filaments; its articulations sprawl like lichen from the cracks between national borders and embrace the cool stones of our foundations. Koel swells with the drama of symbiotic and parasitic life forms, where bodies intermingle and create each other through the hybridities of migrant identity and transnational belonging and are drawn together by the gravity of gravidity.

Mother. Moss. Migrant. These are the lines of consciousness that contour the book. Jen Crawford folds together a transnational atlas of ecopoetic forms. Crawford’s lexicon treks between the scientific, the architectural, and the philosophical, like the U S American poet, Mei- mei Berssenbrugge, tripping boundaries and feralising our cognitive attention. Like Chilean poet Cecilia Vicuña, Crawford reflects on settler-colonial politics, as Koel’s voices take over homes and the dislocation of a ‘self’ – a post-colonial cuckoo driven by dint of geopolitical churn, destroying life in its wake. The poems choreograph a phenomenology of the human as animal, roving between the trans-rational surrealism of tropical wilderness and the hyper-rationality of the biological, inspired by the verdant motifs of modern German dancer, Pina Bausch.

The French horticultural engineer and botanist Gilles Clément has recorded how industrial wastelands can become optimised for bio-diversity, blooming into post-apocalyptic utopias of ‘the third landscape’. Moving like a graceful rhizome between this ‘third landscape’ and an autobiographical one, Crawford tills the ecological value of mnemonic and affective archives – where an early subjective attachment to the natural overcomes exploitive human–nature relationships. Koel creates a third mindscape that explores cohabitant intimacies across species within the warm and dewy contexts of childhood memory, adolescent desire, and the adult effort to survive without harming other creatures.

Koel enacts the saccade of our attention through geographic landscapes and gives an account of how the feminine emerges from what it attends to; through those it tends to. It is the refracted story of how a life grows from a girl rustling among thrush nests in dresses, into a mother with ‘arms knit together as a shroud-knot as an ought / shade,’ and in doing so describes how one life becomes the world for another. Koel is a single day or it is all the days of life moving in grand and feminine interdependence between biological causality and phenomenological existence – between love and violence. Woolf described this place of the feminine when she wrote of Mrs. Dalloway: ‘She sliced like a knife through everything; at the same time was outside, looking on …’ The feminine, running its own attention to the natural world like a high fever, is a visionary memorising the world that is about to break her apart. Each poem in Koel is, in Deleuze and Guattari’s terms, a haecceity – an absolute limit of being entangled in assemblage with ‘an atmosphere, an air, a life.’

This entry was posted in INTRODUCTIONS and tagged Divya Victor, Jen Crawford, Kent MacCarter, Zoë Sadokierski. Bookmark the permalink.
Divya Victor is the author of KITH (Fence Books/ Book Thug), a book of verse, prose memoir, lyric essay and visual objects; NATURAL SUBJECTS (Trembling Pillow, Winner of the Bob Kaufman Award), UNSUB (Insert Blanc), and THINGS TO DO WITH YOUR MOUTH (Les Figues). Her chapbooks include Semblance and Hellocasts by Charles Reznikoff by Divya Victor by Vanessa Place. Her criticism and commentary have appeared in Journal of Commonwealth & Postcolonial Studies, Jacket2, and The Poetry Foundation’s Harriet. Her work has been collected in numerous venues, including, more recently, the New Museum’s The Animated Reader, Crux: Journal of Conceptual Writing, The Best American Experimental Writing, and boundary2. Her poetry has been translated into French and Czech. She has been a Mark Diamond Research Fellow at the U.S Holocaust Memorial Museum, a Riverrun Fellow at the Archive for New Poetry at University of California San Diego, and a Writer in Residence at the Los Angeles Contemporary Exhibit (L.A.C.E.). Her work has been performed and installed at Museum of Contemporary Art (MoCA) Los Angeles, The National Gallery of Singapore, the Los Angeles Contemporary Exhibit (L.A.C.E.) and the Museum of Modern Art (MoMA). She is Assistant Professor of Poetry and Writing at Michigan State University and Editor at Jacket2. She is currently at work on a project commissioned by the Press at Colorado College.


More by Divya Victor on Cordite Poetry Review →
Zoë Sadokierski is a Sydney-based designer and writer. She has designed more than 250 books for various Australian publishers, and is Vice President of the Australian Book Designers Association. Zoë lectures in the School of Design at the University of Technology, Sydney, where she runs the Page Screen research studio, experimenting with publication models for limited edition print and digital books. She also writes a column on book culture and reading in a digital age for The Conversation.