Introduction to Pascalle Burton’s About the Author Is Dead 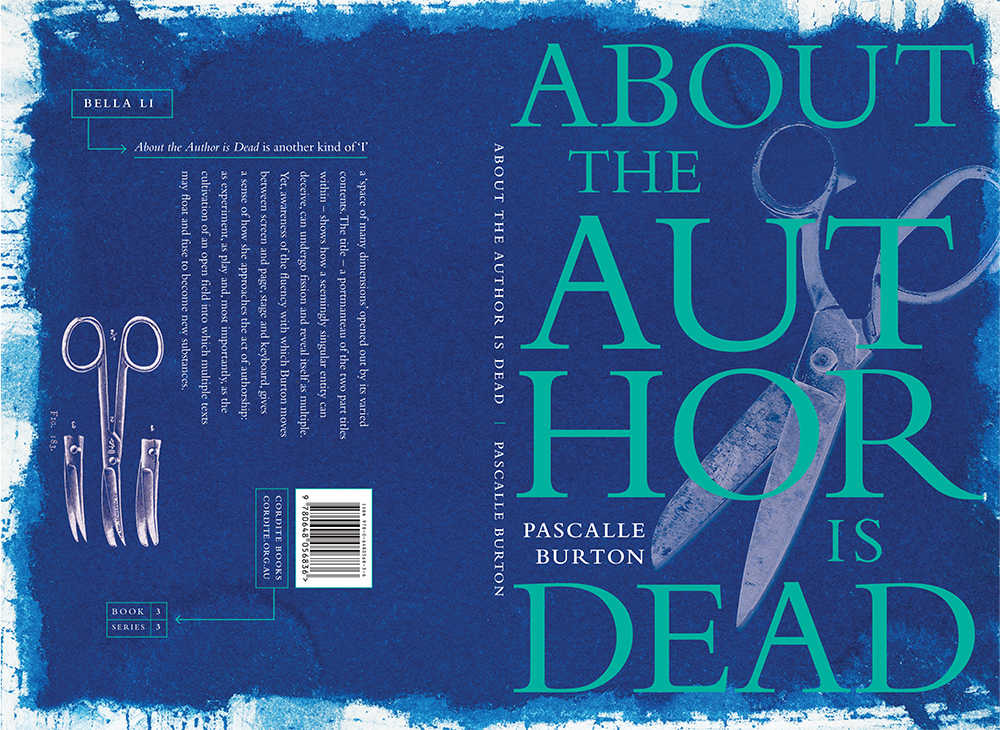 Pascalle Burton’s About the Author is Dead refers to, and opens with an epigraph from, Roland Barthes’s seminal essay, ‘The Death of the Author’. Inside the collection, we find not one author but many: David Byrne and Grace Jones, Miranda July and Jacques Derrida; authors who are filmmakers, authors who are poets, philosophers and musicians. In the company of the contemporary and the dead, Burton raises questions about authorship and originality, authenticity and truth – questions that remain central to creative practice. Well into the second decade of the twenty-first century, the old temptation – in poetry perhaps more than other genres of writing – is not only to conflate the speaking ‘I’ with the authorial ‘I’, but also the authorial ‘I’ with the figure in the garret, monolithic and secluded.

To conceive of a text as ‘a tissue of citations’ (to quote Burton’s epigraph from Barthes) is to acknowledge that all texts are in some sense collaborative endeavours, joined by genealogies – though the lines of succession are neither linear nor clear. It is also to recognise, as Burton does, that biography consists of more than just births, marriages and deaths: ‘I’ is, in the end, also of text; is composed, in fact, of many texts together. About the Author is Dead is another kind of ‘I’, a ‘space of many dimensions’ opened out by its varied contents. The title – a portmanteau of the two part titles within – shows how a seemingly singular entity can deceive, can undergo fission and reveal itself as multiple.

In the tradition of the cut-up or the found, Burton cites, erases and appropriates (sources range from the novels of H  G Wells to the Facebook page of Kenneth Goldsmith), and her approach is polyglot: the languages of internet code and critical theory, popular culture and mathematics, intersect, interrogate and inhabit each other. The lexicon of cinema is particularly prominent: references to films and filmmaking recur throughout. ‘on waking weeping’, for instance, opens with ‘a high-angle close-up’ and proceeds by way of a tightly paced series of stills, while in ‘the gravestones’ the speaker observes of childhood: ‘mine was a b-grade science-fiction film / yours was sprawling and raw / an off-Broadway-one-man-show / a Jarman flick’. Elsewhere, a latent cinematic sensibility persists. Take ‘the cleveland line’, where the suburban surreal of a David Lynch movie, or a Gregory Crewdson photograph, stitches itself into the fabric of the scene:

Such thematic and stylistic allusions to film hint at the multidisciplinary nature of Burton’s work: her creative practice incorporates video, performance, visual art, music and animation. An appreciation of About the Author is Dead does not depend upon familiarity with this larger body of work. Yet, awareness of the fluency with which Burton moves between screen and page, stage and keyboard, gives a sense of how this particular author approaches the act of authorship: as experiment, as play and, most importantly, as the cultivation of an open field into which multiple voices, sources and texts may float – and fuse to become new substances.

This entry was posted in INTRODUCTIONS and tagged Bella Li, Kent MacCarter, Pascalle Burton, Zoë Sadokierski. Bookmark the permalink.
Bella Li is the author of Argosy (Vagabond Press, 2017), Lost Lake (Vagabond Press, 2018) and Theory of Colours (Vagabond Press, 2021). She holds a PhD from the University of Melbourne and is the associate publisher at Cordite Books.


More by Bella Li on Cordite Poetry Review →
Pascalle Burton is a poet and performer with an interest in conceptual art and cultural theory. Her debut collection About the Author is Dead is available through Cordite Books. Projects include UN/SPOOL (with Nathan Shepherdson), 24 Hour Gym (with Tessa Rose), and performing in the band The Stress of Leisure.


More by Pascalle Burton on Cordite Poetry Review →
Zoë Sadokierski is a Sydney-based designer and writer. She has designed more than 250 books for various Australian publishers, and is Vice President of the Australian Book Designers Association. Zoë lectures in the School of Design at the University of Technology, Sydney, where she runs the Page Screen research studio, experimenting with publication models for limited edition print and digital books. She also writes a column on book culture and reading in a digital age for The Conversation.