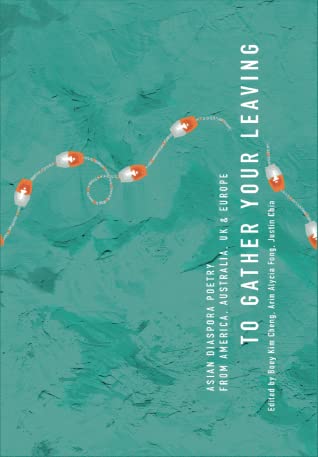 An anthology like this one that aims to be so broadly representative puts itself in a paradoxical position where the failure to articulate a coherent voice amounts to a kind of success. Towers of Babel are invariably more interesting than angelic choruses and it is a credit to the editors that one comes away from To Gather Your Leaving not entirely sure what poetry of the Asian diaspora ought to look or sound like. The sense of intractable heterogeneity about this volume—its ‘sand-grain variousness’ to borrow a phrase from Suji Kwock Kim—is certainly an effect of its capacious size and ambitious sweep. A handsome soft-cover weighing in at almost three quarters of a kilogram, To Gather Your Leaving devotes over 600 pages to poets with Asian heritage writing out of the Anglophone ‘West’: America, Australia, the United Kingdom and Europe.

The continental scale of this volume allows it to sidestep the essentialising slide of other more localised diasporic categories such as Asian American, Asian Australian and British Asian. Part of the problem has to do with the very concept of diaspora. As Ien Ang pointed out not so long ago, ‘diaspora is a concept of sameness-in-dispersal, not of togetherness-in-difference.’ As such, it may point not so much towards the dissolution of the individual nation-state as an intensification of sentiments of ancestral rootedness and belonging; not so much a transnationalism, then, as a nationalism sans frontières. But set against the centripetal force of diasporic identification is the sheer size of that sprawling variegated landmass: Asia. ‘Where are its boundaries?’ the editors ask in a handy if slight introduction. While the volume ends up with a ‘focus on South, and East and South-East Asia’, they are careful ‘to stake out boundaries without trying to dictate what Asia should be’. Whether one draws the border at Pakistan or Iran, Asia in this book is less a fixed geographical zone than a marker of collective difference, a natal horizon ever receding from those, like the speaker in Nguyễn Tiên Hoàng’s ‘Hàn River’, left ‘tast[ing] the fluid of accident’: water, blood, history.

But while the poems are grouped according to continent, they might well have been arranged generationally. The volume spans four decades of work by two, arguably three, generations of poets: from Ee Tian Hong (b.1933), who emigrated to Perth from Malaysia in 1975, to Ocean Vuong (b.1988), the Vietnamese-American winner of the T.S. Eliot Prize in 2017 (he also gifts this collection its elegant title). Generational distinctions have become somewhat hackneyed, but they provide a useful way of tracking the longitudinal stylistic shifts observable in an anthology as capacious as this. Making one’s way from the Boomers to the millennials born in the very decade that the former began to receive recognition from the Anglophone literary world (Vuong was 8 when Shirley Geok-lin Lim won the Commonwealth Poetry Prize), one notices, very broadly, a growing linguistic self-consciousness that attempts to ‘weird’ English (to borrow Evelyn Nien-Ming Ch’ien’s term) through polyglottal fluency as well as the increasing influence of other media, particularly the visual arts (photography, film, collage), on these poets’ textual practices. Even in a collection wedded to a fairly conventional idea of what constitutes poetry, one gets the impression that the future of Asian diasporic art will be multimedial.

It isn’t entirely surprising that of the book’s three sections, the first group of poems written out of America is by far the most substantial. Asian American writing arrived relatively early on the scene (compared to the other Anglophone contexts considered here), emerging as a distinct field of literary, cultural and political activity in the seventies through collections such as Roots: An Asian-American Reader (1971) and Aiiieeeee! An Anthology of Asian-American Writers (1974). But the selection of Asian American poetry presented in To Gather Your Leaving is less representative of the field’s polemical birth than it is of its maturation in the mainstream. A large part of this recuperative process can be put down to academic institutionalisation: the preponderance of the book’s American contributors work at universities and colleges, in English and/or MFA programs. The wages of institutionalisation are counted with ambivalence in Kimiko Hahn’s ‘Asian American Lit. Final’, a poem which alternates between the programmatic questions on an exam paper (‘How does the Asian American body appear in Jessica Hagedorn’s poem—/ In Cathy Song’s poem—/ In Marilyn Chin’s poem—’) and a more vulnerable mode of questioning recorded in diary excerpts (‘Do I recycle images hoping they will endlessly ignite? Do we all recycle them? make our own clichés?’). Through this alternation, the poem registers the burgeoning gap between the diagnostic confidence of a specialised discourse and the uncertainties of a living (and lived) tradition.

For the most part, the American poems just about manage to skirt the pitfall of cliché through the competence and consistency of their craftsmanship. But more than anywhere else in the volume, one gets the impression here of a lyric sensibility unified around memories of warfare, scenes of filial piety, and migrant melancholia. Two poets, however, felt like outliers. Bhanu Kapil’s work is impossible to mistake; her divagations on monstrosity, feral children and psychosis bring the relief of a perverse strangeness to a routine of respectable estrangement. In ‘Notes on Monsters: Section 2 (Wish)’, the migrant is transformed from a forlorn wanderer to an insatiable hitchhiker—equal parts monster and cyborg. Lyric perception is spliced with the uncanny (‘It’s as if the day has a memory of her and not the other way around’) in Ovidian fables where the boundary between bodies is always provisional.

As mnemonic and mourning, songs have always been a potent trigger for the diasporic imagination, but in Pimone Triplett’s verse there is musicality to match. Her poems are a fair way in from the experimental edge of Kapil’s work, but there’s something irresistible about Triplett’s command of cadence. The speaker of ‘Driving Eye’ lays out a stereoscopic vision of Bangkok in a freewheeling approximation of sprung rhythm:

There’s evidence, too, of the sharpness of Hopkins’ reverential eye in ‘On Pattern’, an intricately arranged poem in which the speaker’s commitment to formalism in both art and ritual opens a way to being maintained by tradition (‘how your vessel is rented,/ a work/ to be given back’).

Pages: 1 2
This entry was posted in BOOK REVIEWS and tagged Arin Alycia Fong, Bhanu Kapil, Boey Kim Cheng, James Jiang, Justin Chia, Kimiko Hahn, Maryam Azam, Maya Chowdhry, Miriam Wei Wei Lo, Nguyễn Tiên Hoàng, Pimone Triplett, Romesh Gunesekera, Shamshad Khan. Bookmark the permalink.
James Jiang is a writer, editor and recovering academic based in Brisbane. His work has been published in a variety of venues in Australia (Sydney Review of Books, Australian Book Review, LIMINAL Magazine) and abroad (Cambridge Quarterly, Ploughshares, Modernism/modernity). He holds a PhD in modernist poetry and poetics from the University of Cambridge, and taught literature and thesis-writing at the University of Melbourne for a number of years. His interests range across poetry (contemporary and historical), the history and theory of criticism, and translation. He is Assistant Editor at Griffith Review.