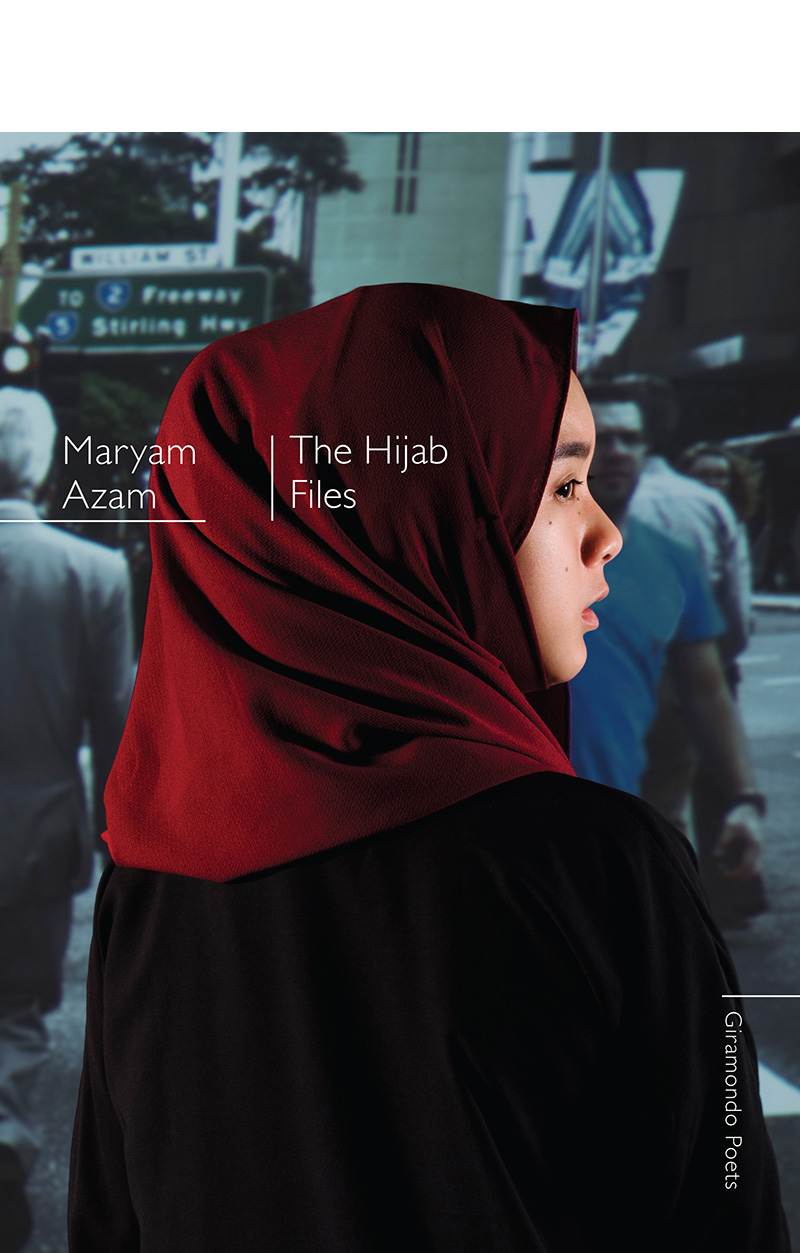 The third section of Maryam Azam’s The Hijab Files is called ‘The Piercing of this Place’. It captures moments of perforation of this world by jinn, prayer, memory, death, and other unnamed, unnameable, astounding things.

In ‘Naseeb’, a poem in the ‘A Brief Guide to Hijab Fashion’ section, such profound topics as destiny and a potential arrangement of marriage for the young woman narrator are discussed. Meanwhile, the party of four sits ‘with our legs / crossed on the sofa eating / biryani from plastic plates. In ‘Shane No. 2’, from the section ‘Wallah Bros’, the sacredness of marriage competes with the very mundane needs of the human body:

This realistic seamless coexistence of regular and religious experiences is comforting to read. In a Liminal interview with Robert Wood, Azam has said that The Hijab Files is ‘a snapshot in the life and times of a young woman in Western Sydney’. The richness of detail of both extraordinary and ordinary happenings described in the collection is one aspect of the mechanism of Azam’s de-Orientalising impulse. The young Western Sydney women/narrators of the collection are people with their own concerns and considerations. This stands in opposition to often one-dimensional representations of veiled Muslim women in poems by some white Australian poets. For instance, compare with these references to purdah and niqab in much older poems by Philip Salom or Dorothy Porter.

The women of The Hijab Files have ‘bad scarf days’ (‘A Brief Guide to Hijab Fashion’, p. 16) and deal with ‘fickle hearts’ (‘Facebook Relationship Status: Single’, p. 26). They pray, and they forget to pray. They have ‘stagnant Sundays’ (‘Layla and Majnun’, p. 30) and think about how weird their pets are. They go to school, and talk to their friends and parents, they go swimming and parasailing and snorkelling. But, as Azam says, ‘[t]o be a practicing Muslim is to bring your beliefs and religious practices to every aspect of life’. In the collection, things that happen are often conceived of as both religious and not, like the following, when the potential intervention of jinns comes into question:

And with these complex representations, The Hijab Files allows young Muslims in Australia to enter a narrative usually reserved for white, secular, ‘regular’ folk: sometimes things are ordinary, sometimes they are profound. The stunning accomplishment of The Hijab Files, however, is the grace and eloquence with which Azam relates these sometimes-mundane, sometimes-profound, always-relatable happenings.

Azam’s style is often direct, uncompromising. The poems written in this way feel easier to process because of this quality.

Circumstances and action are immediate, description is minimal, but alive. Azam writes with an awareness of the sensory. However, there is an array of beautiful, surprising metaphors among which the following stood out and have remained memorable for me:

These beautiful lines, which often appear as a kind of gift / trip-wire within poems, are like the moments of profound clarity which pepper the life and times of the young Western Sydney women of The Hijab Files.

Apparent, of course, is that the collection is a text that cares deeply for its audience. It is a multilingual text. As a person of Indian origin with proximity (though not fluency) to multilingual thinking, speaking, and writing, I am very happy to see that non-English words and phrases are left unitalicised, often untranslated. This is a credit to Azam – and also to Giramondo – in normalising linguistic diversity. I do not know Giramondo’s house style, so this may be their standard, but it is certainly not the standard elsewhere. I, and other multilingual, migrant, culturally and linguistically diverse writers and editors welcome this intervention. As a non-Muslim, there is much of The Hijab Files that passes me by – language, custom, emotion. As a person of Indian origin, there are obvious moments where I am invited in – language, custom, emotion. But, Azam, in carefully selecting and ‘writing for an audience much like who [she] was in high school’, has not severely distanced other demographics whose own experiences may not align so closely with the young women in The Hijab Files. The poems are moving, there is joy and humour and gravity to them that is not unique to Azam’s specific slice of the Australian demographic pie. And, it’s a common truth that poems are not written to reach every reader with the same degree of clarity. These poems show there is much to be gained by centring young Muslim Australians.

Azam’s debut collection identifies and describes a flexibility and porousness in objects often thought of as stable and rigid. Cloth, faith, identity, reality become elastic. It conceives of worldly life as capable of sustaining simultaneity of perception, and as movement between piercing moments of profundity and mundanity.

This entry was posted in BOOK REVIEWS and tagged Anupama Pilbrow, Maryam Azam. Bookmark the permalink.
Anupama Pilbrow writes poems and essays which have been published in Australian and international journals including Cordite Poetry Review, Rabbit Poetry Journal, JEASA, Southerly and the Hunter Anthology of Contemporary Australian Poetry. Her work deals with dialogue, exchange, and gross stuff. She occasionally performs her work around Australia.