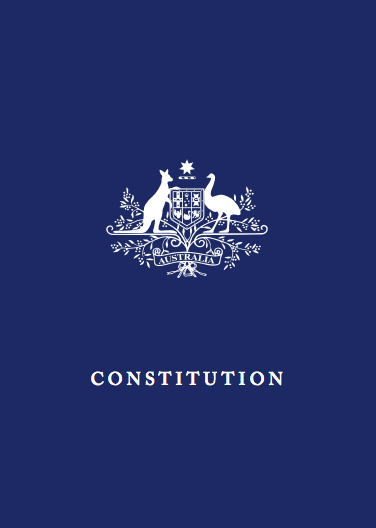 Amelia Dale’s Constitution is deep blue with the Commonwealth Coat of Arms on the cover; it looks like a passport. Yasmin Heisler’s Aquarium Drift features, as its first image, a colour scan of Aquarium Fish (a 64-page special issue of the magazine World of Wildlife) with ‘Fish’ crossed off and in its stead ‘drift’ in aquamarine type off-centre on the page.

Each collection inhabits and collages other texts. And while the process of collage can be described, and its ingredients and method prescribed, the outcome of the process – the art – is alchemical. Dale’s source text for Constitution is transcripts of Malcolm Turnbull in interview on The 7:30 Report. And Constitution’s alchemy is its humour, its inducement to laughter. For instance, in ‘Chapter I, Part I, 3.’: ‘But in terms of editorial matters, a lot of people write to me all the time and say. Some people actually think.’ In Aquarium Drift, the alchemy is in the movement in fragile moments of narrative: ‘fish keepers look consumed’ (from ‘Useful scavenger fish’) and ‘restless dead / markings           clear lips         other internal markings’ (from ‘Egg-laying fish for the aquarium’).

Yasmin Heisler introduces Aquarium Drift with its concept of composition: ‘[a] single word from each paragraph in Aquarium Fish [the magazine] has been used to compose the following poems. The magazine’s subheadings are the poem’s [sic] titles.’ I was curious about the magazine and went hunting for it, unsuccessfully. The best I could do was tally the words in the poems – there are 265 (or 269 if you count hyphenated words as two distinct words …) of them – that’s four or five paragraphs a page. But, the magazine is only an echo of itself in the poems.

Every poem but the final one sits next to a photograph of two pieces of beach treasure: dry coral, shells, rocks. The poems, with titles sounding like captions – ‘Pools and ponds as coldwater aquariums’ or ‘Indoor water gardening’ – take on the quality of photographs in the sense that they record and catalogue. These poems exhibit images upon images, next to each other, falling into each other. The poem ‘Indoor water gardening’ witnesses ‘lighting bodies permanganate           stick on / travellers           acid strap-like lace’. Heisler crafts momentary narratives by transforming what-once-were-probably-nouns in Aquarium Fish into what-can-be-verbs in Aquarium Drift. The ambiguities are multiple: ‘they pocket backgrounds/the masses shell delightful like’ (‘Anemones, corals and shells for the aquarium’).

Unlike Aquarium Drift, Dale’s Constitution contains no explicit details of its source text, or its method of organisation. Elsewhere, Dale has explained that the source is transcriptions of Turnbull in interview on The 7:30 Report. The transcriptions have been edited by Dale to ‘make the convolutions of his speech visible’ (Messenger).

Constitution is a text that destabilises – it makes liquid one of the base texts of the nation of Australia and diffuses the words of the nation’s 29th Prime Minister. Constitution also warps the reader’s apprehension of the formal document. It is hard to read: the difficulty deflects readerly expectations about how a text should be organised. Constitution begins with the title and ends with the publication details, as if an afterthought or final secret, on the final page.

Footnotes, for instance, don’t lead anywhere, tables of data are empty of information besides Turnbull-speak, and the words of the text are organised linearly. But they are more than linear – they are absolutely linear: headings, subheadings, references, the table of contents, copyright information all slot directly into an unrelenting string of Turnbull-speak. ‘Chapter VIII’ begins:

Beyond its textual organisation, however, this poem is hard to read because the content is so self-similar you feel that you might start anywhere, rearrange, chop and change the text without effectively altering it at all.

Constitution is often laugh-out-loud funny – Turnbull fails standards of etiquette and conversation again and again: ‘Thank you. Great to be with you. Well that’s not right, actually’ (‘Chapter I Part III 24. (ii)’). Or: ‘From the first day: / (i) of the election, once we got into office, I said: “You have to be.” And so they were’ (from ‘Chapter I Part III 44.-44. (i)’).

The comedy of the poem is an unstable thing. Dale says, ‘It is all Turnbull. I’ve deleted some words but all the text, the weird phrases, the odd metaphors are all his’ (Messenger). Turnbull himself is not particularly funny; his speech is deadening and bland. His government is not funny. In only the last weeks it has overseen and overlooked incredible violence towards asylum seekers, humiliation and dehumanisation of Australia’s queer community. But the emptiness, blandness, visible irritation, condescension and contempt Turnbull expresses towards his interviewers – and towards the citizens of Australia – when taken out of context and scrubbed of specific political reference, the words are so revolting and shocking that they become ridiculous and induce laughter. That these pages and pages of words fail so thoroughly to communicate anything concrete at all is hysterical. Who could say all this and yet so little? Hahaha! A J Carruthers has written of experimental poetry in Australia that its essential purpose is political – it seeks to ‘decolonise, question and critique nation and culture’. The poem is funny; its source material is not.

This entry was posted in BOOK REVIEWS and tagged Amelia Dale, Anupama Pilbrow, Yasmin Heisler. Bookmark the permalink.
Anupama Pilbrow writes poems and essays which have been published in Australian and international journals including Cordite Poetry Review, Rabbit Poetry Journal, JEASA, Southerly and the Hunter Anthology of Contemporary Australian Poetry. Her work deals with dialogue, exchange, and gross stuff. She occasionally performs her work around Australia.