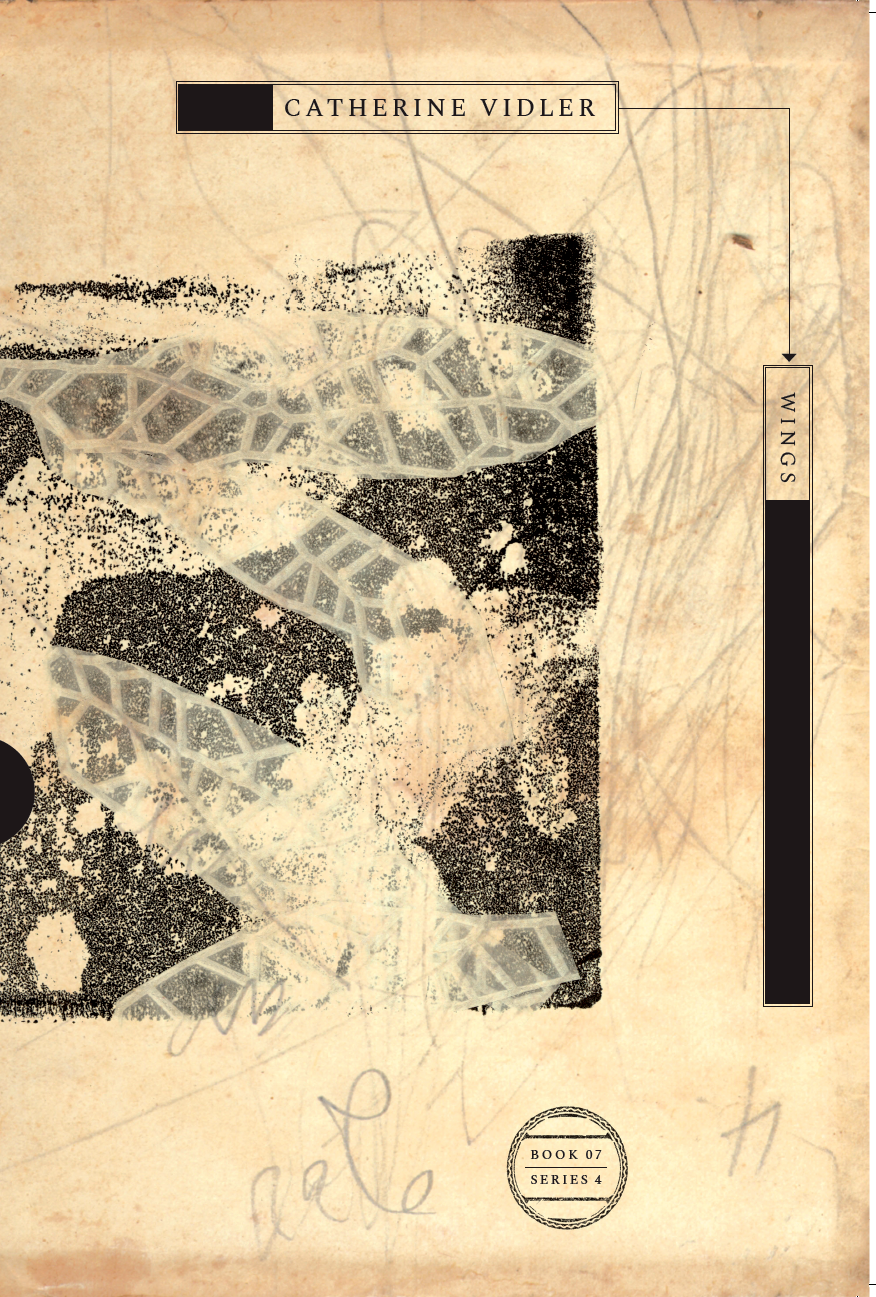 Catherine Vidler’s Wings are in your hands: here’s 66 of them from a series of 100.

At the beginning of this book is a black-and-white image of what appears to be an insect with six, or perhaps eight, wings; some stretch beyond the page.

Here, as elsewhere, Vidler works with series and seriality.

Erupting from the cursor tracking across the screen, and from the copy-and-paste of the computer clipboard, Wings encounters the complex erotics of the cosmos via the pixelated maneuverability of Microsoft Paint and Microsoft Word.

In a diary entry, Vidler observes how ‘a single brick in the wall of my college room contained more than enough poems to last me a lifetime … it contained infinite potential poems!’

Necessary for this contemplation of the infinite within the finite is the vastness of Vidler’s visualism: the more wings there are, the more Wings can reach a magnitude beyond that which can be contained within the printed book.

Every shape, line, spiral, swirl and squiggle opens up what Vidler calls ‘sheer quantum’; inviting the reader to observe the folds and variations between each wing, to explore how 1 becomes 100, then becomes 66, and then becomes something far more expansive, because in the spaces or overlays between adjacent wings there darts a multiplying swarm of yet further wings.

Identifying the embodied nature of Vidler’s work is crucial: her writing is deeply felt, not simply on the level of its own construction, but also on the level of somatics – the click and drag of the cursor driven by her hand, yes, this is part of it – but also the propulsion of the work via ‘flares’ and fevers, and then during the event of its seeing and reading, when it is sometimes like a Magic Eye appearing.

DL (downlink), the link from a satellite to a ground station, could be an analogy for where Vidler’s wings go, how they appear to mediate between a far-reaching cosmos and earthly bodies.

Let’s put it another way: Wings evokes shapes of stars, nebulae, galaxies, galaxy clusters, transmitting their shapes here: zoom in and zoom still further in, and these patterns can appear also as cells or viruses reproducing and mutating.

Eradiating out of this book’s winged folds is something more than can be articulated in this brief space, though issues of space and scale, of flying forth from a zone of containment, are some of the ever-mutating meanings Wings awakens.

This entry was posted in INTRODUCTIONS and tagged Amelia Dale, Catherine Vidler, Zoë Sadokierski. Bookmark the permalink.
Amelia Dale is a retired poet.


More by Amelia Dale on Cordite Poetry Review →
Catherine Vidler's collection of poems Furious Triangle was published in 2011 by Puncher & Wattmann. A chapbook, Canberra Poems, was recently published by Ginninderra Press, which will also shortly publish another chapbook of Catherine's trans-Tasman poems, The Window and the Tree. In October 2016 a chapbook of 28 visual poems made out of and in response to 'chaingrass', a word from Bill Manhire's poem 'Falseweed', will be published in electronic form by Jazz Cigarette. Further chaingrass work in the form of chaingrass 'patterns' appears or is forthcoming in ,em>The New Post literate, Otoliths, SCRIPTjr.nl, RENEGADE (an international anthology of visual poetry and language arts edited by Andrew Topel). A large collection comprising both chaingrass patterns and the original set of 28 visual poems is shortly to be published by STALE OBJECTS dePRESS. Catherine is editor of trans-Tasman literary magazine Snorkel.


More by Catherine Vidler on Cordite Poetry Review →
Zoë Sadokierski is a Sydney-based designer and writer. She has designed more than 250 books for various Australian publishers, and is Vice President of the Australian Book Designers Association. Zoë lectures in the School of Design at the University of Technology, Sydney, where she runs the Page Screen research studio, experimenting with publication models for limited edition print and digital books. She also writes a column on book culture and reading in a digital age for The Conversation.