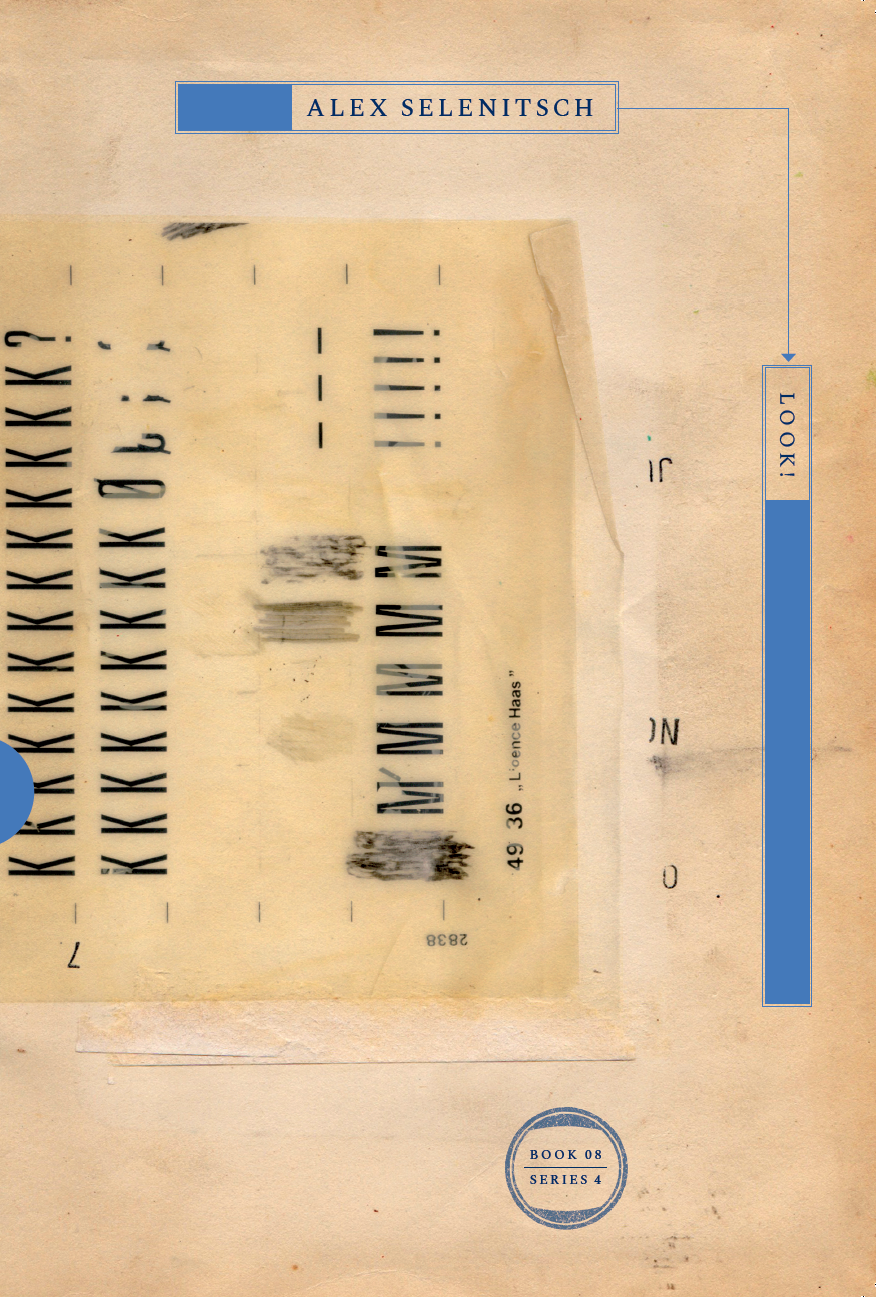 To situate the work contained in Look!, it is worth recalling the rich but neglected Concrete Poetry tradition. Even in the twenty-first century, its challenge to the transparency of the word as a medium of communication is still provocative. From the mid-1950s, led by artists and poets such as Eugen Gomringer in Switzerland, Haroldo and Augusto de Campos in Brazil, and Ian Hamilton Finlay in Scotland, Concrete Poetry spread as a global, yet peripheral, phenomenon. In Australia, Alex Selenitsch joined others such as Sweeney Reed, Peter Murphy and Richard Tipping in the burgeoning Concrete Poetry scene of the late 1960s.

Selenitsch’s cross-disciplinary practice over the past five decades has encompassed installations, prints, sculptures and books, and habitually blurs the boundaries between poetry, visual art and design. There is a consistent line of development from his early works to the more recent compositions of Look! He continues to use single words, for example, abstracted from their usual place in sentences, to create compositions structured on the graphic space of a page, though these have now expanded into series. A word such as ‘absolute’ – a visual mark and a sign of an idea – functions as a generator of formal and conceptual variations. Here, Selenitsch exposes the elusive goal of art (which is supposed to disclose truths about the world by revealing the absolute) through a series of slippages, renegade letters that descend (or ascend) the page in ladders. Elsewhere, a boat becomes almost indistinguishable from the sea that contains it, and ‘air’ dissolves into atmospheric fields.

Selenitsch is also an architect, and we could see these compositions as akin to an architectural typology, a pre-given form that architects sometimes use as a generator for practice. Subject to endless variations and meanings, types can be forms (columns or arches) or recurring patterns, small characteristics that architects order, repeat and vary to form a house, then a row of terraces, a street, or a city. Selenitsch uses letters as modular units to displace, repeat and reconfigure, each time resonating alternative sounds, sights and meanings. In Look!, this process of repetition with variations results in the permutations of ‘perfect’, for example, while ‘palm’ mutates to ‘psalms’. An extension of his earlier ‘monotones’ (the first version appeared in 1968), ‘monotrees’ evolves spatially as a series of structures, while ‘Rarrk’ riffs on the cross-hatching of Aboriginal bark paintings, both look and sound rippling down the pages.

The unusual graphic symbols of ‘weeds’ pop up within Selenitsch’s composed landscape of letters, like their botanical namesakes that threaten our careful ordering of nature. Even the book’s title – Look! – features the simple device of an exclamation mark, which alters the meaning of the word. By using such subtle marks, Selenitsch’s practice focuses our attention on our habitual mode of looking and reading, our thoughtless daily filtering of thousands of marks, letters, words and images. His compositions invite us to look, hear and conceive our designed world afresh.

This entry was posted in INTRODUCTIONS and tagged Alex Selenitsch, DJ Huppatz, Zoë Sadokierski. Bookmark the permalink.
DJ Huppatz is Melbourne-based ratbag who has had poetry published recently in VLAK 2 (2011), Southerly, Overland and Black Inc’s The Best Australian Poems 2011, as well as an article, 'Poetry of Mashup Cultures', in VLAK 3 (2012).


More by DJ Huppatz on Cordite Poetry Review →
Zoë Sadokierski is a Sydney-based designer and writer. She has designed more than 250 books for various Australian publishers, and is Vice President of the Australian Book Designers Association. Zoë lectures in the School of Design at the University of Technology, Sydney, where she runs the Page Screen research studio, experimenting with publication models for limited edition print and digital books. She also writes a column on book culture and reading in a digital age for The Conversation.