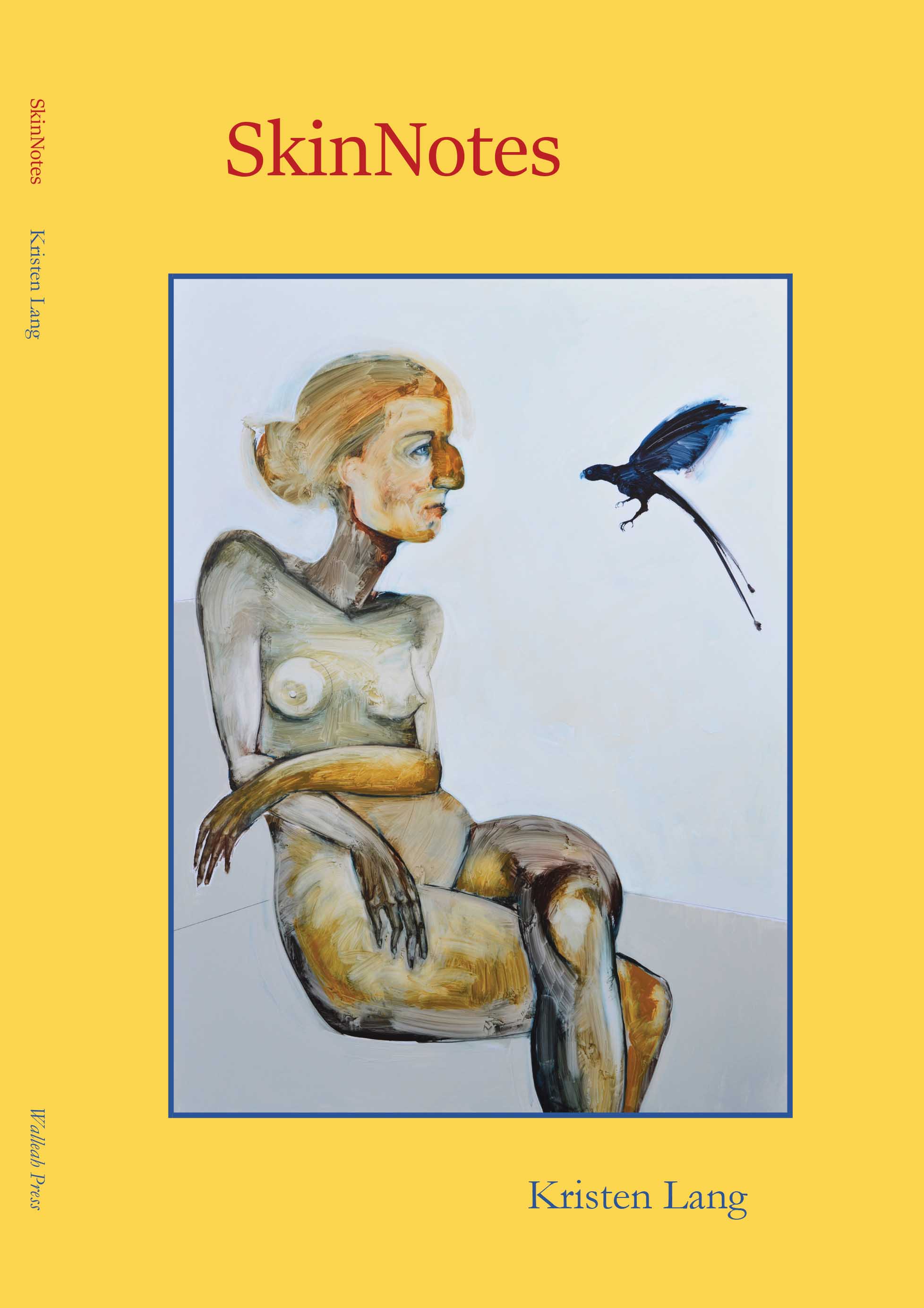 Kristen Lang’s SkinNotes articulates an intense poetry and poetics of the body through a holistic series of lifelines in which skin, bone and organs are not so much dissected as regarded, reassembled and given human or other animate agency. Lang’s deft, original and at times startling use of metonymy places bodily parts and other material of daily life into alignments which convey an expansive range of meaning, dimension and depth.

The collection encompasses multitudes in both its scope and strata, with each skilfully edited section notable for a standout poem at its outset. ‘Glass’ is one of these, remarkable for the nuanced and multi-layered interplay between visible surfaces and what lies beneath:

What is glass but sand, broken down and recomposed into the possible illusion of a level plane? Its transparency is both deceptive and a means by which a more complete perception of whatever it covers may be obtained. Just as stones contain water, so their own intrinsic elements are held in by a surface that despite its visibility remains imperceptible. These reanimated self-objects resist isolation or definition other than by shifting their constituent parts. This is reaffirmed by the luminous presence of ‘The horse’ that presages the third section of the book. By this point, Lang has already proposed that ‘none of us / are angels’, and this Rilkean thought expands through the equine incarnation and immanence. ‘How the angels are not ourselves’, she muses. Nevertheless, there are angels we fabricate: ‘We dress them’, possibly to cover their stark and frightening essence. Her eloquent rejoinder continues:

The uncertain searching conveyed through the ‘slanting’ elision implies the same estrangement Rilke knew, that ‘we are not really at home in the interpreted world.’ Lang also concedes, despite ‘the familiar’ presences, this is mediated territory for human beings. Unlike us, the horse simply exists without apprehension of the terror that derives from the beauty each single angel encapsulates, even when its form seems to be within unsteady reach.

The animal world features in several, often shorter poems here, allowing for more condensed imagery when the discursive voice makes way for the emergence of ideas without reflective commentary. An example of this can be seen in ‘Dog quantum’, which begins with a simple physical sensation followed by creaturely emergence:

This composes a gestalt of the immanent being, through connections that commence with the most palpable of feelings, moving seamlessly into ascription and metaphor that come off as effortless, despite the leftfield ‘loose giggle’ collocation. Another poem describes the recovery of a bird: ‘We follow the tide of its lungs, / the slow opening of its beak.’ The interplay between inside and outside space elaborates an instinct elaborated throughout the book, as the section ‘Blood harmonies’ ends with a poem for a young child, where

Like the one recovered, whose ‘feathers hum with flight lines’, this literal embodiment moves in projective beauty and delight. The trope resurfaces, becalmed, in the wonderful and deceptively simple ‘Candlelight’:

The exact corporeal location may be uncertain or unspecified, but is also entirely perceptible and solid as its components coalesce into concise and incontestable articulation.

Contact in more overtly self-contained contexts consists of interlaced elements that at times elude comprehension, if not apprehension: ‘The touch / we cannot choose to extinguish’ in the opening poem, in one example, leading in to the initial section where the creation of new life and the changes that occur in the body involved predominate. A longer poem, central to the tropes Lang follows, ‘The small house of her body’, is structured like the book in four parts, expressing the pain of an unnamed trauma, that hints at either abortion or violent parturition (‘the torn haze of what she had done’), and in ‘Lake’ – as a coda – ‘she is torn by the ripples.’ Around the repeated rupture and aftershock the encircling stones are ‘dark as eyes.’ These simple seeming lines convey the concept of deep song and unfathomable nature of duende: love and almost inexpressible loss, lines that can be strummed like Lorca’s best when stripped down, as

The poet returns through assonance and music to stark physiological consciousness, night and a phoneme removed from sleep. ‘Lake’ is one of several poems here related to the oneiric capacity for ‘crumbling’, a word used more than once throughout the book, as well as heightened sensory reception in its stages or absence. In ‘The slight translucence of the sleepless’, for instance, tiredness assumes the simile: ‘like moonlight / on the inside of her skin.’ Once again the reader is returned to the inside, complicit and becalmed at the source of things.

One characteristic of complex and original works is their confidence to operate outside established genre. SkinNotes contains Confessional and Imagist overtones without being dependent on either sensibility, creating enough space to manoeuvre and draw breath. Lang’s liberal use of personal pronouns and dedications punctuates a controlled discursive stream, with moments of spellbinding clarity and quietude that stop the reader short in sheer admiration. ‘Do play on’, she urges the body: a source of such splendour with its finely tuned and calibrated organs. As methodology, statement of intent or an invitation to start reading again, this underlines and understates a resonant tour-de-force.

This entry was posted in BOOK REVIEWS and tagged Kristen Lang, Nathanael Pree. Bookmark the permalink.
Nathanael Pree is of Australian and German background, brought up and educated in the United Kingdom. He did undergraduate studies at University College London, before working in education in Russia, Vietnam, Cambodia and Australia, with additional work experience in India. His postgraduate studies were at The University of Sydney, specialising in the works of W.G Sebald (Masters’ Dissertation) and Charles Olson (PhD, ongoing).