Review Short: Les Murray’s Waiting for the Past 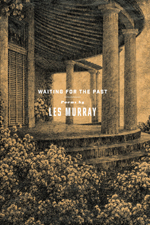 Waiting for the Past by Les Murray
Black Inc., 2015

Half a decade on from appearance of the elongated shadow figure that adumbrated Les Murray’s last collection, Taller When Prone, the poet returns with stature intact and a magisterial resounding of strata and reach.

The retrospective nature and special beauty of this new collection is evident from the outset in ‘The Black Beaches’, where tightly controlled rhythms measure the shifting and cyclical nature of place, primordial natural history in grains of sand and colours that collocate with images of significance: ‘yellow rimming the ocean’ to inland ‘beaches of velvet black / /peat of grass and great trees’. The earth inverts itself and the poet waits for it to return, in attendance on the Giant’s Causeway, rocks rising from the ocean after their motion has made them immanent, ‘all of half way from America’. Black is also evident in charcoal and a reprise of dripping lead from an earlier haiku, which delineate grounds of contest, whether between saints and systems of reformation, or eras breached by the incomprehension of ‘worldwide estrangement’, clichés and boundary fences.

This territory, and a human place within it, are marked by words comprising, to use Peter Porter’s expression, ‘installations of reality’. These represent life forms called into being, constructed and consumed: the processes involved custodial, defining and deadly in turn. Food sources retain their significance in these latter stages of Murray’s world: gourmet ‘barrages de richesse’ and boutique ‘horseradish farms’ are offset and superimposed by the solidity and solidarity of bread, ‘Jewish rye and German/brothers from the hob’. The generous exuberance of slurped mussel soup is part of a world where ‘stuff of life’ comes pulsing through, in lines that form a dishevelled delta, milk in its seeming, steaming abundance. By contrast, in this world of mass production, sliced bread is an error – a mistake, or just [sic]. Sugar, like ice cream and ‘saltless meats’ overseen by a sickly light, the ‘new yellow glare’ from the fridge. Real bread has depth and emotion, it is where darker stuff co-exists, not to be consumed by the ‘idle svelte’. Bread also declines like anything else disposable, like rubbish or bodies in their sinister ‘landfill on the shelf’, where there’s salt on the side and death insinuated.

Such indicators of illness are symptomatic of the poet’s physical stress and distress. The contradictory recurrence of golden and yellow hues spans the warmth of sunshine to droplets of diabetic urine. There is a certain finality in the colourlessness of an octopus, an abject ‘denizen’ dead ‘of too much chlorine’ in the outdoor public baths, relegated to the status of ‘slop biltong’ taken out ‘in the throwaway tide’. Another sentient being has become a piece of rejectamenta, inedible and without a place in either its natural or artificial habitation.

The solitary death of the cephalopod finds an unlikely link to the loneliness of the ‘fawn high rise of Beijing’, housing ‘all the only children’ who will inherit the future. On the facing page, an older ‘vertical black suburb’ of hives on a tree trunk and their ‘gold skinfulls of water’, presents the young people and these microcosmic phenomena as contiguous, constituents of a more universal living space. The inclusivity of this vision, and the connections that the poems invite their reader to make offset the more sombre meditations on place, where ‘slow walking black cattle/circle up off cleared flats/past pastel new brick houses’, creating an elegiac kinesis in response to the flush-faced alien impostors in an ancient landscape.

Past displacements are expressed by other children for whom English is a second language, against a background of war and the more general uneasiness of growing up, and unsteady physical and psychological tropes of personal histories. The poet’s own youth as a student from the country out of place in an increasingly hostile world finds its correlative in a wider frame of history, where the fates of ‘Europe and her limestone cities//swirled with last-breath calcium’ are replayed through a film of granular porosity. Further confessional elements towards the end of the book create an uneasy kind of appendix: when it comes to the evocation of high school massacre, for example, who exactly is ‘the celibate victim of years ago’ who ‘divines’ that ‘we’re shooting back now?’ The awkward teenager that lives on in the poet and his voice falter around this theme, they could be read as intentionally dark and ironic in concert, or as having struck a false and slightly crass, albeit isolated note.

This aside, a sense of apprehension, if not terror, is present as a strength of the collection: implicitly voiced in ‘Bird Signatures’ – sketches of atrocity in flashbacks from ‘the Nankeen night heron’ – or explicitly catalogued as weekly victims of domestic violence presented alongside the skeletons and skewed dynastic destinies of centuries past. It is in the frequent use of shades of black: volcanic, nocturnal, a backdrop to burning spinifex and sinister loneliness. The climactic ‘High Speed Trap Space’ masterfully merges a near-death experience, a premonitory ‘imminence of butchery and glass’ with an almost Cubist, vortical nightscape bordered by ‘froth-barked trees’, from where the natural world and narrator alike leak effluvia – from ‘blubber lip’ to ‘dribbling cud’. Elements from these scenes spill over into other poems where buildings, bodies and billabongs collide and collude as continuation of the tropic and poetic chiasmus and cohesion that mark this collection and the overall oeuvre.

One could ask of these latest installations whether they comprise the past that Murray is waiting for or else an assembly of elements that show stages in that process of attendance. His sense of mortality is evident, and with it comes a feeling of renewed force and clarity from his offbeat and acentred sources of power. From calcified strata to treetops a sense of convergence unites original modes of being with a round up of everyone and everything from their places of meaning. In that case, the past is on its way and it may well last forever.

This entry was posted in BOOK REVIEWS and tagged les murray, Nathanael Pree. Bookmark the permalink.
Nathanael Pree is of Australian and German background, brought up and educated in the United Kingdom. He did undergraduate studies at University College London, before working in education in Russia, Vietnam, Cambodia and Australia, with additional work experience in India. His postgraduate studies were at The University of Sydney, specialising in the works of W.G Sebald (Masters’ Dissertation) and Charles Olson (PhD, ongoing).