Review Short: Bel Schenk’s Every Time You Close Your Eyes 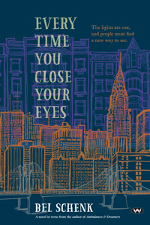 Every Time You Close Your Eyes by Bel Schenk
Wakefield Press, 2014

Bel Schenk’s third poetry collection, Every Time You Close Your Eyes, is sparsely written, yet deeply self-aware. Taking the form of a verse narrative, the book is a series of poems exploring events commonly referred to as the ‘New York City blackouts of 1977 and 2003’, similar in circumstance, yet as Schenk demonstrates, vastly different due to the temporal space between them.

Schenk begins by introducing a power-less 1977 New York, a city already powerless against financial crisis, increase in crime, and at the beginning of a heatwave. The darkness of the blackout further distorts social boundaries already under question and rioting and looting is soon to breakout:

The attention Schenk brings towards the act of fictional representation allows her poetry to allude to the similarities between the construction of history and myth. Schenk further highlights such connections between the historical and fictional by evoking a late twentieth-century milieu through the representation of two individuals greatly influencing American society at the time: actor Christopher Reeve and criminal David Berkowitz.

Schenk’s references to Reeve and Berkowitz not only signify contemporary socio-political events of New York City in 1977, but gesture towards the type of anxieties a post-9/11 New York City in 2003 will experience.

Reeve, as noted, is famous for his portrayal of Superman, the iconic and eponymously named superhero upholding American idealisms of freedom and prosperity. In the poem ‘Superman’, Schenk writes: ‘Yes, Superman is up there, up high, / somewhere between flying and falling’ (10). These lines not only summarise Reeve’s embodiment of Superman, they also unnervingly prefigure the equestrian accident that caused Reeve to become a quadriplegic. Reeve was then considered a super-man after he began advocating for people with spinal-cord injuries, remaining an influential activist until his death in 2004. Schenk’s references to Reeve also allude to the action of transitioning and working towards a form of recovery, or creating a new identity in response to a traumatic event. Like Reeve himself, New York City had to go through a process of rehabilitation.

On another spectrum, Schenk’s reference to Berkowitz – otherwise known as the serial killer Son of Sam – reveals a violent past that haunts this era, and demonstrates how traumas remain in a collective consciousness. Berkowitz threatened the people of New York City from July 1976 until his arrest in August 1977. In the poem ‘Dear Sam,’ (16) Schenk presents a nine-year-old narrator, Alex, writing a letter addressing Berkowitz. In the letter, Alex draws comparison between acts of war and acts of crime: ‘I know why soldiers kill / people. It is because they have to or else they will / get in trouble’ (16). These lines eerily gesture towards America’s 2003 invasion of Iraq. This introduction of Alex as a child is also important in the way Schenk will later reveal how he and other characters develop over the 26 years between the 1977 and the 2003 blackout.

Schenk experiments with visual perception in the way she positions each poem. Many of the poems have a generalised title, such as ‘Hiding’, ‘Comic Book’, ‘Aviation’ and ‘Exactly’, and Schenk uses this point of distance to then zoom in on a specific scene occurring within the blackouts. In the poem ‘Embrace’, Schenk focuses on the character of Robert, who is in his apartment playing the cello in order to deflect the ‘the shouts and the screams’ (11) from the streets. By shifting focus to the above apartment Schenk is able to reveal the close proximity in which people live, allowing for unspoken intimacy and an appeasing solidarity between strangers. The woman living above Robert ‘lowers her eyes as she listens to the notes’ and then ‘[c]loser, she puts her ear to the floor / and waits there, until the end of the last bar’ (11).

Similarly, in poems such as ‘Fade’, Shenk critiques the realities of living in a populous city like New York:

The reader might wonder if the injured man in the poem really is ‘small’, or whether he merely appears insignificant to pedestrians who have so habituated to these accidents that they feel it necessary to ignore them, preserve their own safety and maintain set schedules. Shenck also alludes to American gun culture by suggesting that the injured man creates a fist ‘as if holding a weapon’, but then complicates this image by suggesting that the man’s fist could also appear to be holding ‘someone’s hand’. The line enjambment between the possibilities of lethal weapon and human hand amplifies this juxtaposition and exposes the relationship existing between violence and intimacy, one Schenk explores further in the verse narrative.

While there are moments where the reader may be left wanting more insight into the characters and their psychology, they are never shallow in their depiction. Schenk’s Every Time You Close Your Eyes shows how poetry can represent moments of time with stunning concentration.

This entry was posted in BOOK REVIEWS and tagged Autumn Royal, Bel Schenk. Bookmark the permalink.
Autumn Royal is a poet, researcher and teacher based in Narrm/Melbourne. Her current research examines elegiac expression in contemporary poetry. She is interviews editor for Cordite Poetry Review, editor of Liquid Architecture’s Disclaimer journal, and author of the poetry collection She Woke & Rose. Her second collection of poetry is forthcoming with Giramondo Publishing.