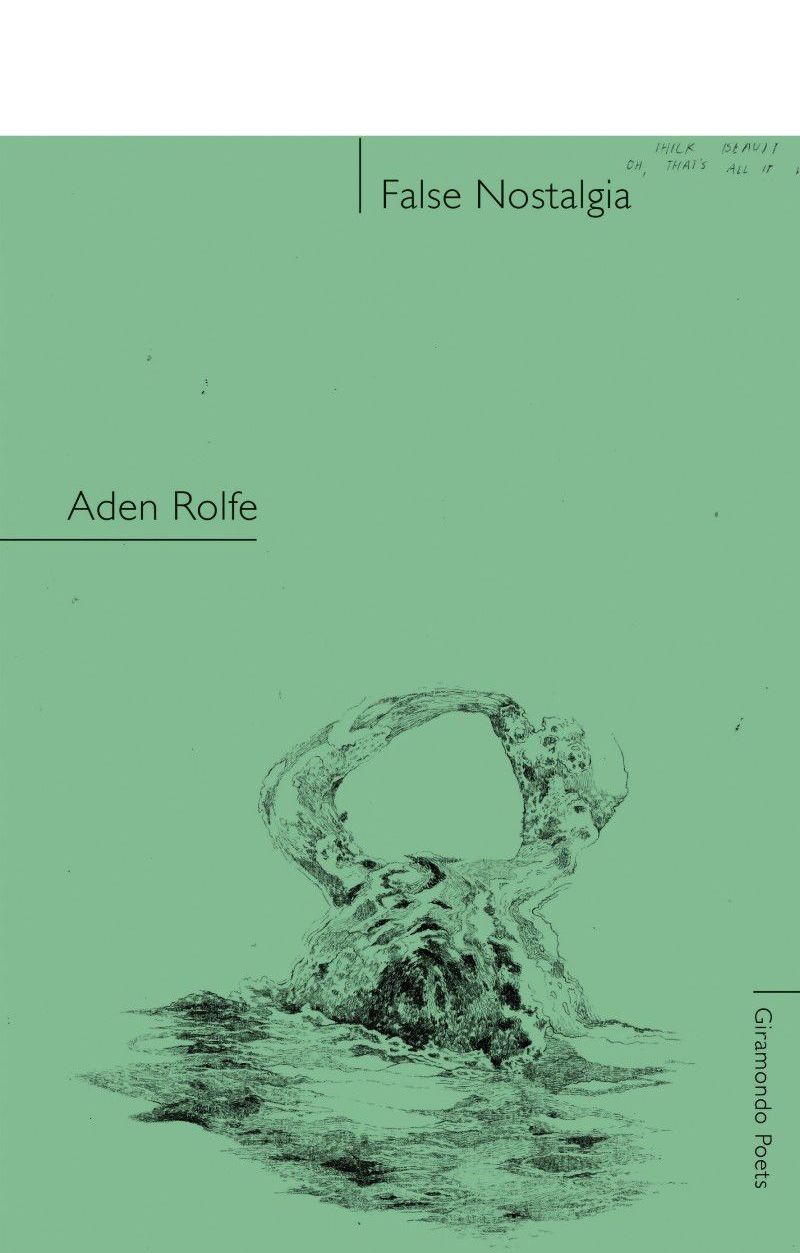 Aden Rolfe’s False Nostalgia presents a collection of memories and corresponding vagaries of forgetting, which stimulate and unsettle in unpredictable and oblique turns of thought and phrase. His work includes philosophical, lyrical and confessional voices, the overall discourse serving to recreate and recover highly original self-objects in time and space.

The collection starts with a meditation on learning: who we are and how we become that way. This process often involves unidentified particles of memory and implies a previous existence that one is not fully aware of, and may be compelled to invent. Rolfe identifies this as Plato’s concept of anamnesis, leading to the paradoxes inherent in statements like: ‘You negotiate your position in relation to an event, particularly an emotionally resonant one through memory’. This process applies not only in a temporal sense but, as Rolfe eloquently demonstrates, to perception and recollection of place.

An initial premise is that although we may be defined by things we remember, and that: ‘When our memories change / so do our stories’, an addendum warns: ‘just / because it’s meaningful / doesn’t mean it happened’. Therefore, we read to remember and write to forget, create twists and tropes through loss and uncertainty, to clarify or distort who we were, are, or have been. Given the physical and psychological changes during one’s lifetime/s, it is worth a considering the poems included on the effects of disorders such as a stroke, and that anamnesis can also refer to a patient’s medical history.

For instance, in ‘We watched the Waves’, Rolfe hints that to be sure of holding onto a memory in the future, we sometimes watch the present more intensely than is natural: ‘we try to watch the waves so that later we can say / we watched the waves’. The poem derives from a line by Robert Hass, so we also have to wonder which of the two poets actually experienced that time, and whether Rolfe’s poem exists to dispel a false memory or to create a necessary sense of anamnesis. Marcel Proust also comes into the conversation, creating memory through deliberate, sensory linking between childhood and adult senses. By contrast with his predecessor’s environment, Rolfe finds:

These are interpenetrable places, and imply settings where we can see ourselves in a picture, even if that picture is no longer present and we are no longer there.

There would also appear to be the vertigo induced by uncertain paths, the faraway sources wished for by Arthur Rimbaud, with only the end of the world ahead, or an undefined space in the interim, where footsteps are erased in dust or washed out by waves.

Rolfe explains nostalgia was originally diagnosed as a longing for one’s native land, prevalent among homesick mercenaries, who would ‘have the tendency to lose touch with the present, to confuse it with the past, to conflate real and imaginary events’. Since then, it has developed from a mental ‘affliction’ to ‘a poetic trope’. There is a form of nostalgia, however, that functions as healing: wilfully evoking past experience, not only pleasurable but grimy and uncomfortable, which through a certain way of remembering confers a hint of bitter-sweetness and which: ‘doesn’t fit the common definition of nostalgia but it’s not strictly false, either’.

Rolfe uses intertextuality in skilful and unexpected ways: juxtaposing classical and contemporary sources, expertly interwoven (and unobtrusively, although meticulously referenced). One draws on the short story ‘Funes the Memorious’, by Jorge Luis Borges, who refers to ‘this sacred verb’ (to remember), whose protagonist suffers a kind of amnesia in reverse after an accident, rendering all his memories intolerably vivid and omnipresent. Physically paralyzed, Funes is sentenced to remember all the particles of his life, and dies after a few years of this condition, from ‘congestion of the lungs,’ the message being that to retain all we have experienced is fatal: there is no way it can get out, there is too much to express. Rolfe references Funes in relation to the advantages of forgetfulness, which can function as: ‘A way to stop a surge of detail from bursting / the banks’.

A switch to prose gives an intensely personal précis and astute assessment of Michael Haneke’s film, Caché, a work without apparent resolution, and notable for its unnerving and drawn-out scenes of edginess and absence, punctuated by a startling episode of violence resulting from a botched adoption, and indirectly related to colonial abuses. Rolfe muses that these aftershocks from recent history are ‘not about nostalgia [but] about guilt and responsibility and collective memory’, leaving their residue in domestic disquiet. Maybe the least stability of all is in that uncertain place called home, with its potential to provide both transcendence and terror at its limen with the (‘hidden’) outside world. Anamnesis is felt here in yet another context: the realisation that history is often violent and chaotic and that like personal recollection, collective memory does not conform to the continuities and contingencies that would otherwise make it comprehensible.

If memory is an art and so too, forgetting (which as ‘Ars oblīvium’, ‘doesn’t feel / like anything / remember.’) then what are the functions of analepsis, recollection and recognition? Will we really know the inexplicable ‘it’ when we see it? ‘Projecting forward, we can only wait to see our hearts breaking, be recast, lose sight of what matters. There were no simpler times, it turns out, no house by the beach’. Memory is a trickster, fixes events in place, and then moves them around when we least expect. Attempts to recover past time are misinterpretations of nostalgia. The collages memory presents, and which Rolfe expertly and compassionately composes, are the truer versions, rearrangements of the self in the cracks and edges of the mosaic that comprises shared space.

This entry was posted in BOOK REVIEWS and tagged Aden Rolfe, Nathanael Pree. Bookmark the permalink.
Nathanael Pree is of Australian and German background, brought up and educated in the United Kingdom. He did undergraduate studies at University College London, before working in education in Russia, Vietnam, Cambodia and Australia, with additional work experience in India. His postgraduate studies were at The University of Sydney, specialising in the works of W.G Sebald (Masters’ Dissertation) and Charles Olson (PhD, ongoing).