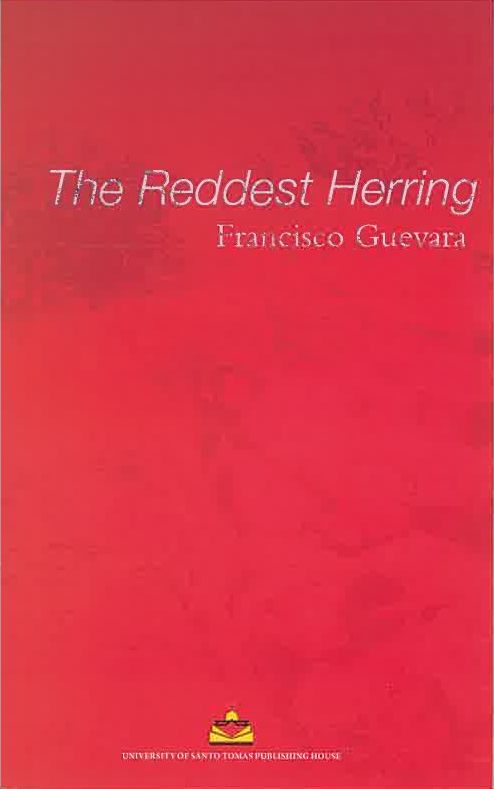 At the time of his death, Francisco Guevara – ‘Kokoy’ to everyone who knew him – was becoming a unique, unwavering presence in contemporary Filipino poetry. An unlikely graduate of the Iowa Writers’ Workshop (reports suggest that he was repeatedly stymied by the rituals of the workshop lyric), in 2010 he returned home to the Philippines to take up a position at De La Salle, one of the country’s most prestigious universities. In late November of 2014, at just 31 years of age, he was killed in a road accident while skateboarding; The Reddest Herring had been completed shortly before. ‘Kokoy was a breathtaking, singular poetic prodigy,’ wrote US writer Thor Nystrom, ‘and I weep for the work the world has had stolen from it.’

A photograph is discernible beneath the bright red cover of The Reddest Herring. While it might bear little obvious resemblance to the poems within, or to the poet himself, this photo is actually an important sign of some of Guevara’s deepest preoccupations. Taken at the end of the nineteenth century by an anonymous photographer, Filipino casualties on the first day of Philippine-American War is an image of a nation that has just rid itself of one colonial power, only to see it soon replaced by another. Hundreds of thousands of Filipinos were killed by US forces during the conflict; a new, American empire had flexed its muscles and was squashing the vestiges of an older, Spanish one. But as much as the Philippine-American War could be the inauguration of a century of Filipino resistance to American (and Japanese) imperialism, it is also an event which cauterised the close association of a struggling Asian nation with the rapid ascension of the United States. 120 years later, so deep is US influence in Filipino culture, education and politics that it makes little sense to posit an ideal, or unsullied, alternative. Thus, 500 years after the first wave of Western colonisation, the Philippines is a geo-political anomaly: an archipelago on the edge of the world’s largest land mass, it is a predominantly Catholic nation on the other side of the world from the Pope; an Asian haven for basketball, buffalo wings and Budweiser.

But it would be a serious error to assign the Philippines a wholly metonymic relationship to the USA, or even to Catholicism; beneath and amongst the tides of invasion, Filipino realities have proliferated into extraordinary complexity. In ways that are hard to fully appreciate without having met the man, Guevara embodied and embraced some of these national contradictions. [Y]ou would be quoting Nietzsche,’ writes Nystrom, addressing Guevara:

These cultural fractures and mis-alignments are central to the productive forces of Guevara’s poetics, too: there is no stable register, no uncomplicated sense of ‘voice’, no rarefied field for poetry, even; the pursuit of an idea needn’t sacrifice attention to others:

The question of Language in the Philippines is an almost impossibly complex one. Over 180 languages are spoken, and more than five million people each speak Tagalog, Cebuano, English, Hiligaynon and Ilokano. No one language can account for anything like a National Language (only 25% of the country’s population are native speakers of Tagalog, the most widely-spoken). These aren’t hermetic systems, either: English words abound in Tagalog, for instance, which is also peppered with Spanish. Even more interestingly, the Chavacano languages are creoles based on Mexican Spanish and Portuguese; in some, while much is common with Andalusian Spanish, many words are also borrowed from Nahuatl, the lingua franca of the Aztec Empire. American and Spanish Empires, local dialects and official languages; Filipino languages represent neo-baroque fluxes of imposition and inversion. This is not just an issue to do with etymologies, either, but also with the ways that words sound and are spoken: Filipino English, for example, is a distinctive mixture of American pronunciation and accents derived from native languages, and in conversation is hardly ever spoken in isolation but rather is threaded continuously with phrases from these languages. That is, English for a poet like Guevara is always trembling on the verge of something else. Such a writer, fluent in both English and Tagalog, but also familiar with Spanish, Cebuano and Hiligaynon, never writes steadfastly ‘in’ one language or the other, but rather might write ‘on’ them: keenly aware of the branches from one language to the other, he skirts their forms, assembling productive patterns.

When Guevara wrote in these pages in 2012, ‘I am interested in the way etymology creates the circumstances of its word’s failure, and yet it makes language impartable,’ he was referring to both the inextricable relationship of contemporaneity to histories of conquest and diffusion, and to the way that such diffusions constitute an ongoing sense of unsettlement and uncertainty. ‘I am interested in thinking through revolution,’ he continues, ‘in order to think about the productive (read: ethical) implications of participating in the newness of rupture with the truss of tradition while operating in the present progressive.’ This present progressive, Kokoy probably wouldn’t want me to argue, could constitute the basis of Filipino poetics. More to the point, though, is that his language, layered with the accents of another, and which might at any moment tilt into it, is entirely immanent to the evocation of uncertainty that we find in his work. That photograph of the US-Filipino war is a dormant presence in the book, but so too is the much older legacy of Judeo-Christian mythology; as American English is unravelled by a multi-lingual Asian poet, then, so too is a Judeo-Christian story of origins. Consequently, in The Reddest Herring Adam and Eve are refigured as Adam and Alice:

Pages: 1 2 3
This entry was posted in BOOK REVIEWS and tagged Francisco Guevara, Jack Spicer, Stuart Cooke. Bookmark the permalink.
Stuart Cooke is a poet, scholar and translator. His latest books are the poetry collection Lyre (UWAP, 2019) and a translation of Gianni Siccardi’s The Blackbird (Vagabond, 2018). He lectures in creative writing and literary studies at Griffith University.