Review Short: The Two Romanticisms, and Other Essays: Mystery and Interpretation in Romantic Literature 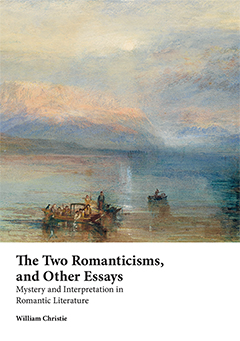 The Two Romanticisms, and Other Essays: Mystery and Interpretation in Romantic Literature
by William Christie
Sydney University Press, 2016

Romantic poems are elusive creatures. Exhibit A is William Blake’s ‘The Blossom’ (1789), in which a mysterious voice asks a pretty robin, a blossom, and the reader, to ‘seek your cradle narrow’. Perhaps by the necessity of the uncanny danger of meaning, readings of Romantic poetry have always been accompanied by disputes about Romanticism as a movement. These conflicts seem to encompass an entire political shift in an age of revolutions.

In The Two Romanticisms, and Other Essays, Professor William Christie weighs in on this burden of mystery in Romantic poetry with some hope of avoiding ‘discipline games’. As head of the Humanities Research Centre at the Australian National University (ANU), Christie is a respected teacher and scholar, and would appear well-placed to provide some measure of an answer for students and readers of Romanticism.

The Two Romanticisms focuses on ‘major lyrics’. There are a number of chapters that dip into Samuel Taylor Coleridge’s The Rime of the Ancient Mariner and Kubla Khan, William Wordsworth’s Lyrical Ballads, Keats’s ‘Ode on a Grecian Urn’, Shelley’s ‘Julian and Maddalo’ or Byron’s Don Juan and Childe Harold’s Pilgrimage. The epilogue to the book offers a conceptual history of the idea of the imagination as a way to orient readers to the period of Romanticism.

One of the most compelling interpretations in the book is a chapter that dwells on Coleridge’s The Rime of the Ancient Mariner. Christie analyses a point at which the poem moves from what seems a simple pastiche of old ballads to something other, uncanny. A Pelican dangles from the mariner’s neck in a frozen, ghostly landscape: ‘We are in another world, the capital “r” Romantic has supervened upon the small “r” romantic, as infection supervenes upon a wound’.

This image of infection, wound and disease is itself a pastiche of much old literary criticism (Edmund Wilson’s The Wound and the Bow, for example). We’re then reminded that Christie is offering us at least two cradles for Romanticism to play in, Romanticism with a capital ‘R’ – the symbolic movement that infects a reader with some greater wound beyond the pastiche – and a romanticism with a small ‘r’, a stormy collection of wild themes that can be rocked and broken.

That this argument about Romanticism is driven primarily by the major lyrics is telling. Even for a book aimed at the high-school curriculum, it is somewhat disappointing to find a focus on ‘major’ lyrics to the exclusion of the ‘minor’ ones; two romanticisms if there ever were two. After decades of critical work looking beyond the contours of masculine Romanticism, it is troubling to find still such a neglect of minor poets and writers who represented major socio-political trends in English Romanticism.

An entire historicist horizon of interpretation goes missing: the entry of dissenters, Catholics, Jews, radicals, women, working class and racially other into the Anglican establishment, or the brute fact of greater numbers than ever before reading and writing poetry and novels. And now, as Christie’s Two Romanticisms introduces prose novels such as Jane Austen’s Northanger Abbey or Mary Shelley’s Frankenstein, there’s still a sense that avoiding ‘discipline games’ means obscuring so much: as if we are left with a mystery of literature that is a narrow cradle for a mode of Romantic criticism.

The result is a readable set of essays, but also an overall obscurity that leads Christie to return to some well-hashed critical fields. By the time the reader arrives at the epilogue, the definitional challenge that is the central matter of the book is lost, and not in an entirely productive way. The useful chronology of the Romantic Period appearing at the start of the book begins with the birth of William Blake (1757) and ends with the death of William Wordsworth (1850), the seer of imagination. Within this space, there are some characteristic political milestones for English Romanticism – a small taste of the vastness of Romanticism. But Romanticism is still thrown up as a disorientating movement that always seems to impress on us the need for some kind of ‘set of coordinates’ – which is how Christie puts it in his reading of Coleridge’s poetry.

The Two Romanticisms remains elusive in its definition of Romanticism, hardly electric or startling, but well worth reading for an overview of the challenges of interpreting the Romantic movement. There is a certain disquiet apparent in The Two Romanticisms, a hesitancy on the limits of meaning: the book plunges toward polarised sites of definition at times; at other times, it vaguely skirts critical fields. The space devoted to discussing the poems or novels in detail seems to be ever narrowing as the book skips from essay to essay; The Two Romanticisms as an exposition of a literary movement appears constrained. Romanticism nonetheless remains one of the most popular movements of literature, and continues to throw readers from narrow cradles to worlds of mystery and meaning.

This entry was posted in BOOK REVIEWS and tagged Beornn McCarthy, William Christie. Bookmark the permalink.

View all posts by Beornn McCarthy on Cordite →