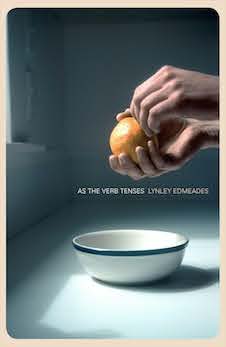 As the Verb Tenses by Lynley Edmeades
Otago University Press, 2016

As the Verb Tenses is a rare debut collection of poems that dazzles and delights with a profane, childlike wisdom. Acts of movement and play energise an accomplished performance held together by rare precision and a gentle power. Its author is the poet Lynley Edmeades who was born in Putaruru, a small town that is the home of the renowned Blue Spring and the source of much of the bottled water in New Zealand. Edmeades has travelled, read and published in New Zealand, the US, Ireland and Europe.

One of the great virtues of As the Verb Tenses is that it is not ostentatious; it remains poised in conversation and occasion. The verse is tensed between abstraction and feeling as it observes supposedly banal things: this kitchen pot and orange, and this clear spot on the counter. This everyday quality is some feat given the web of influences on Edmeades: avant-garde modernism, minimalism, and poststructuralism.

Edmeades completed an MA at the Seamus Heaney Centre for Poetry at Queen’s University in Belfast, and is currently undertaking a doctorate in sound in avant-garde poetics at the University of Otago. As the Verb Tenses bears the dynamics of modern Irish, as well as contemporary Asia-Pacific poetry; it plays with words between sounds, geographies, feelings. Edmeades achieves much in the calm irony of poems such as ‘Between Speech and Sound’, which invites us to feel ‘the usual shortcoming / of abstractions’.

This is a collection that refuses to choose between Baudelaire and Marx, and it is all the better for it. Judging from the epigraphs that open the book, Edmeades has structured the collection with at least two experiences of active tension. They are characterised by a mode of nonknowledge that opens us to a simultaneously sensuous and critical modernity. The first experience is that of the child who – as in Cage’s description of a trip to New Zealand that never eventuates – is characterised by a disappointed belief in the discourse of adults. The second experience is one of adult bookishness clashing with an unrecognised reality; or foolishness that makes unliveable promises to children. To open this experience, Edmeades provides an epigraph from one of the pithy sentences in Foucault’s The Order of Things: ‘Don Quixote reads the world in order to prove his books’.

Throughout the collection, Edmeades plays with Foucault’s critique of discourse to continually return to a heterotopic limit: ‘It’s difficult to keep the order alive’. A powerful new dimension is added to Foucaultian modernity through poems such as ‘Towards Whatever it is that Keeps Things Apart’:

In undertaking her poetic critique of everyday life, Edmeades makes full use of the geography of New Zealand, Belfast, Europe and Russia. Two poems called ‘The Order of Things’ almost but not quite bookend the collection. They plunge us into a kind of coming of age, post-colonial moment in the movement between country and city, from the family farm in New Zealand to the open air of the urban park:

The collection continues to dazzle as it moves between London, New Zealand, Belfast, a Siberian lake, and back to the metropolis. The peculiarity of post-colonial experience is evoked in poems such as ‘Second Hand’, or ‘East Belfast’, where ‘Birds sit in trees older than me’. Other poems return more directly to the quixotic theme of the epigraph: living ‘By the Book’, for example, just leads to ‘increased lack of intimacy’ in a poem about relationships. Poems such as ‘Cregagh Road’, ‘Inis Mór’, ‘As if’, ‘Orange Order’ and sketch Northern Ireland from the perspective of an outsider, a post-colonial child who finds wisdom in disorder.

In As the Verb Tenses, Edmeades guides the reader with an expert sense of rhythm and structure through the idiosyncratic itineraries of everyday globalisation. The poetry enchants, capturing the familiar childhood estrangement felt when we are playing with words to apprehend the world. This profanation of verbs is at its best when it approaches, as Walter Pater put it, the condition of music. Make like a verb and read this book.

This entry was posted in BOOK REVIEWS and tagged Beornn McCarthy, Lynley Edmeades. Bookmark the permalink.
Beornn McCarthy is a writer and PhD candidate at the University of Melbourne with a Masters in English Literature. He has lectured and tutored in many subjects in English literature at the University of Melbourne and Deakin University. He is currently working on a monograph about the life and writings of Isaac D’Israeli in the Romantic era.