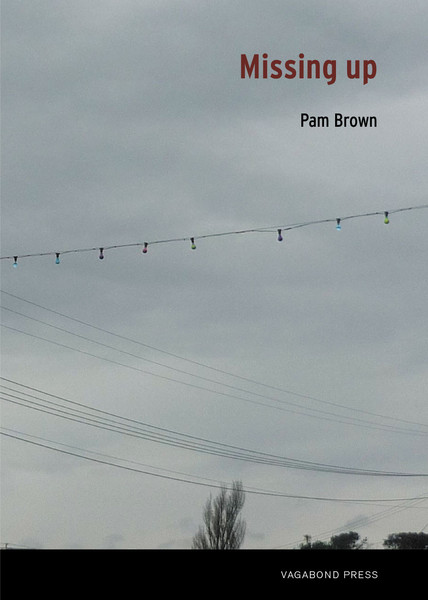 From the cover, let alone the first lines, the title appears apt: a sense of levitation, humming along wires, strands of illumination flickering through a work of direct and intimate voices, understated in its deftness and density, with light touches that lift the lexis, and air pockets in its seams of meaning. Spread out across the pages are samples of complete, if not absolute contemporaneity interspersed with work that decries the shortcomings of an age in which culture is so often presented as a commodity. Pam Brown’s latest collection showcases self-objects and articulates responses to salient concerns, providing masterful representations of the everyday and outré that take their time to settle into the spaces and absences within which they are framed.

Missing up provides regular reminders of the offbeat and melancholy immanence of the eclectic self-objects and material that make up urban existence. A nod to William Carlos Williams observes: ‘no phenomenon but in things / like slim cyber tablets / scissor sharpeners vinyl bucket seats’. These are presences that convey a semi-contained kinetic energy. The palpable sense of atoms jostling for space as if in defiance of the sadness implicit in any effort towards their decoding – the gravity and lightness of a book, tea towel, blue and orange plastic crates, and colourless (or is it flat white?) noise. Solidity and elision co-exist through a tacit sense of animism, where verbs and nouns take on one another’s attributes, creating peopled things: the life that exists in the solid-seeming compounds that create city and suburbia.

Brown on language is notably to the point: ‘it has to lift off or else I’m not interested in it’. Her poems, she has said, ‘don’t ever leave the street I’m on … and it’s not always literally that street. And I use place and then extrapolate it, abstract out.’ Place is something hard to define, as are the psychic and textual grounds onto which appear isolated or occasionally constellated signals that indicate arrival or absence. Missing up appears apt for a collection of poems that lift off and plane out, taking traces of tar, flakes of bitumen from the street which the poems do not leave so much as interleave, adding another dimension to everyday perception. In this environment ‘colour strips’ contrast with ‘dun brick niches / stacked / with ash’ – as cityscape constituents, from cargo to post-industrial strata with their sediment visible in the cracks. From the wharves to the outer burbs, ‘& Surrounds’ shows ‘the streets here / regular stepped / a flat expanse / chrome-plated railings / separating a superior plane /from inferior’, and stepping in to match is Brown’s uncompromising typography, the planes and levels indicating straightened and discontinuous contours and segments of life-objects. Translated – or taken aside – as text these refuse to rest easily on the page, ‘as time extends / the moody morning / wanting to wander / these organised hills / managed paths / & surrounds.’ Typography as psychogeography: the uneasy self ‘born in parenthesis / raised in an interstice’ ends up, if not entirely missing, ‘sorting through / tattered monads / might as well be gone.’

Regarding her technique, Brown has pointed out that ‘it’s mixing not layering.’ This allows for gaps between not only the lines, but also jump cuts in chronological and geographical continuity: interpenetration and unpredictability where each shift and indent could signal disjunction or connection. These representations of unstable and shifting spaces splice urgency and familiarity according to a projective sense that creates an open force field from home, where a ‘fridge compressor / gurgles’, to the aftermath of Fukushima. Its findings and debris alike form a transnational and trans-temporal urban cento, where predecessors and contemporaries share a certain edginess: Baudelaire and Rimbaud recompose their grimaces together with Schuyler and Cage at the sere and greying edges of striated suburban skies. As the patchwork tapestry lifts off, she asks: ‘& what do you reckon, / my wintry shadow, / my fraudulent duplicate, / somebody up there?’ Mon frère? If, as she avers, ‘the human mind is / empty’, it’s not just a matter of rhetoric.

Brown has referred to a term used by Gilles Deleuze, ‘aux aguets’, meaning to be on the lookout or in ‘a state of cultural awareness’, and this mode of attention is evident here in a collection which refers to and writes in mentors and friends as an ongoing ‘call for community.’ Conversely, as the ‘aesthetics of the surface’ in the poems ‘Required Reading’ and ‘Fricassee’ acerbically indicate, this inclusiveness is balanced by a certain skepticism, as evidenced by an archetypal ‘dolt in residence’ operating ‘all over the very same map’ but in another dimension altogether. Academics writing poetry on the side would be advised to read elsewhere. Yet, however sharp her observations bite, Brown concludes on a conciliatory note for society in general: ‘I would like / a speculative set / of laws / that are friendly to life’, especially in an age where ‘every bridge / shelters someone /homeless’. Maybe sometimes we all need to find ourselves ‘anywhere out of the world’, and at others may not have the luxury of choice, as she reminds us, via Baudelaire. The outcome, if never ideal, could be one where diverse voices, amicable and empathetic (and those of antipathy or estrangement) find their respective points of co-existence, if not convergence.

A conclusion to this review would seem incomplete, or at least tentative, given the urge to keep returning to these concise and finely crafted – however deceptively – lines. A glance at the string of light bulbs drawn over the sparse and darkening street scene on the cover goes well with ‘Hit single xmas’ – considering it now as dark clouds bank over the Manly peninsula where I write this. Elsewhere, ‘skyrupt / big thunderstorm / plotting squall line / swerves / beyond Wattamolla’, appears to presage tornadoes in Sydney, and sheeted rooftops lifting (missing?) up over all this tensile and confounding space.

This entry was posted in BOOK REVIEWS and tagged Nathanael Pree. Bookmark the permalink.
Nathanael Pree is of Australian and German background, brought up and educated in the United Kingdom. He did undergraduate studies at University College London, before working in education in Russia, Vietnam, Cambodia and Australia, with additional work experience in India. His postgraduate studies were at The University of Sydney, specialising in the works of W.G Sebald (Masters’ Dissertation) and Charles Olson (PhD, ongoing).