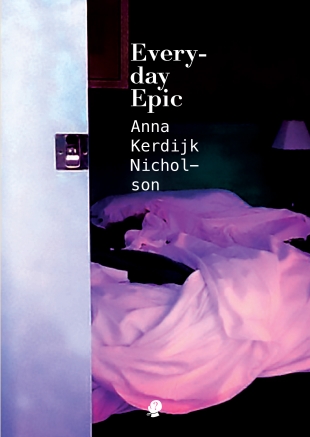 In the untitled preface to Everyday Epic, Kerdijk Nicholson describes how ‘the poet grinds down / a sum of parts / to atoms’. The result is a world in which the most quotidian of instances and images are made ‘alchemically new’, an echo of Ezra Pound’s credo to repeat, but with difference. These lines also suggest that the process of grinding down is at once violent and erotic, displacing and magical, disturbing and strangely familiar. Everyday Epic is a collection that often appears contrary in its aims: it is as political and nostalgic, for example, as it is playful and serious. Yet in its collision of forms and content, there is an abiding sense of cohesion, a quality that reminds readers of the shocking qualities of the ordinary, and the ordinariness of the shocking. This is most often explored in relation to tragedy, and the histories that shape discourses around the politics of national identity.

As the title of the collection makes clear, it is in its attention to details that are diurnal or circadian that marks the uncanny nature of these poems, at once both intimate and distant. In ‘Griefs’, ‘just the kettle on the boil / is a completeness / the perfect one hundred degrees’, a ritual dedicated to the ‘small civilities’ that eases the pain of mourning. In ‘How and Why’, ‘a shock of ginger broken cat’ breaks the smooth road of a freeway, while an ‘old handbag of an electrocuted bat’ hangs alongside ‘late afternoon lorikeets’ in a eulogy to the quiet lives and deaths of an animal-littered suburbia. As Kerdijk Nicholson notes, the poems are something of a ‘catalogue’ that ‘places time and again’ collect the minutiae that comprise the cycles of experience and being:

This homage to the commonplace is often figured in images of unexpected and curious violence. In ‘Allotment’, for instance, digging in the earth is likened to Seppuku, evoking a gut-response to what is, essentially, gardening – a juxtaposition that is as alarming as it is amusing: ‘I stood my weight on the fork / rasped into the mud’s belly / and encountered worms’. Not unconnected are the images of erotic consumption, such as ‘The First Mango of Summer’: ‘Your juices / run down my wrists / I’m waiting to mouth you’. Similarly, in a poem about sending pears to a lover, Kerdijk Nicholson writes how ‘the juice will pool on the plate. / I will suck my fingers’, while ‘I Have Left You—’ links love, bodies and desire in a sequence of punning food images about consumption and emptiness: ‘this salad of winter leaves / made from small bitter / hearts, tight against the cold’. The playful, associative language of these poems is both luscious and cruel, with their suggestions of sex and passion, but also, fittingly and – perhaps, naturally – of death and depletion.

This attention to the intricate, however, is not without a greater historical and political context; indeed, the eponymously ‘epic’ quality of Everyday Epic is in the counterbalancing weight given to images of migration, refugees, and post-colonialism. A scattered sequence of ekphrastic poems, for example, imagines the plight of Sri Lankans and Aboriginal Australians, as well as refugees in Villawood, Christmas Island and remote detention centres. As these poems are drawn from paintings, photographs, and accounts of suffering, there is not only a sense of echoing or mimicry through which an original attains a kind of double-life, but also a questioning of perception, and of power; specifically in relation to perspectives of seeing and hearing. In ‘The Subject – Lallah Rookh 1866’, based upon a photograph by C A Wolley, the second-person voice borders on didacticism – ‘You are the neat grey curls / that fine supple skin’ – which is complicated by suggesting an ambiguous relationship of exchange: ‘we are watcher and watched’. There is a persistent sense of intimacy in the narration of the body being recounted, however the power of the gaze is not necessarily that of the reader/viewer but shared by the female subject, whose camera-stare resists commodification both in the original photograph, and in the poem that it produces: ‘No doubt who looks at whom.’ The question of domination here challenges traditional self/other binaries, and thus it seems apt that the collection finishes with a mock-epic of Burke and Wills’ outback expedition, contesting an official narrative history that is often, as Burke muses, ‘empty empty words; / bullshit to the last’. Indeed, in line with issues of gaze, the poems dealing with the complex identity politics of nationhood and belonging are tied to vivid and haunting representations of landscape, either explicitly, such as in ‘Desert—’, in which the ‘no man’s land’ of the outback ‘accepts troop-carriers, / razorwire’, or more tacitly, in which foreign bodies are othered and transformed as panoramas: ‘This watercolour gives no safe ground… / A line binds tight above your breasts / cuts your chest: pectoral mass above, / below watercolour’s deep, deep brown, / bosom-defined’.

Most importantly, however, is the repeated focus on the telling of stories, the need to ‘language our withouts’. While this is a theme present throughout most of the collection, it is most vividly realised in relation to those poems concerned with anxieties about home and trauma, especially in terms of the refugee experience, and the fear of a loss of self. In ‘Villawood’, quoted as though voiced by an unseen narrator, men are described as ‘burnt-out shells’ who ‘can barely speak their names’. Trapped in a world that is not their own, ‘If they could talk, they would / tell stories like myth’ which ‘their tongues would struggle to describe’ as they ‘are defeated by new words’. There is an impetus both to tell and to be heard, but also the inability to do so – a reminder of the redemptive powers of language, but also of its destructive potential. In ‘The Poems of His Country’, for example, a young poet who wants to ‘write out our culture’s / great poems’, is brutally stoned to death, after which ‘the poems faded / word by word, page by page’.

Poetry and storytelling thus become a series of impossibilities, a situation of right and wrong languages, of compulsions and prohibitions, and of public and private acts that are as essential as they are taboo. In its balancing of contradictions, in its doublings, detail, playfulness, and violence, Everyday Epic is as enormous as a crisis, and as familiar as ‘that which can be found in the sun’.

This entry was posted in BOOK REVIEWS and tagged Alyson Miller, Anna Kerdijk Nicholson. Bookmark the permalink.
Alyson Miller teaches literary studies at Deakin University, Geelong. Her short stories and prose poetry have been published in both national and international publications, alongside a book of literary criticism, Haunted by Words. Her collection of prose poems, Dream Animals, is forthcoming.