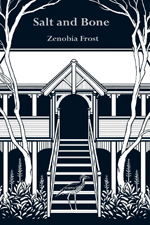 In its own words, Zenobia Frost’s Salt and Bone slinks ‘between ibis-legged houses / and wakeful graveyard’, and belongs to ‘the hour of the curlew’, a liminal space that speaks of ghosts and transformation. As a collection, the poems are pervaded with a sense of haunting, plagued by abject bodies ‘aching for salt and bone’, the suffocating presence of water, and the archeology of death. It is noteworthy that Frost’s work both begins and ends with a warning of the power of unknown and strange things; a reminder, perhaps, of the gaps that exist between the ‘real’ and the imagined.

Indeed, Salt and Bone is a collection that relishes in the gothic and the macabre, often anchored in the physicality of the body or objects rendered as bodies. In ‘Auf Wiedersehen Spiegeltent’, for example, the deconstruction of the circus tent is figured as a kind of flaying – ‘the circus is gone/ big top / stripped to bone’ – while its performers bend and collapse like origami: ‘their drunken limbs forget / the ways they should not bend /[…] they fold back into boxes / like costumes like paper’. Frost’s manipulation of bodies is both unsettling and striking, at times even verging on a form of delightful masochism, as demonstrated so vividly in ‘Odontophilia’ (a fetish with teeth), in which the poem describes a fixation ‘on the ache as teeth / shimmy loose’. As the poem replays ‘this ritual of / fidgeting pressure’ that is at once so alien and so familiar, it conjures a vicarious pleasure that is simultaneously alluring and othering, a quality that marks a number of the poems throughout the collection:

Fittingly, given the gothic interests of Salt and Bone, the collection can be read as chasing down death, both literally, in its representations of war and suicide, and more figuratively, imaged as an opportunity for unbecoming or re-birth. The emphasis on cycles, such as those associated with rain – ‘The storm plays us, / rain falling and falling back / safely into clouds’ – are also connected with suggestions of loss and decay, conveyed most poignantly in Frost’s answer to Kafka’s The Metamorphosis, ‘Unbecoming’. Imagined from the perspective of Grete, it is a poem that evokes the persistent presence of death but also the corruption of her brother’s transformed body, and its abjection, through a repetition of the sins of the past and a fear of the Ungeziefer, the vermin:

The inclusion of Grete, a figure of haunted domesticity, is significant here, given Frost’s interest in the notion of home. The preoccupation with houses and homes involve spaces, which, in this collection, are empty and full of ghosts, an apt metaphor for the literal lack of inhabiting bodies and a pervading sense of nostalgia. Complementing these ghosts are their more earthly incarnations in the form of possums that plague the suburban rooftops, unseen but heard at night. The eeriness of these poems, including ‘Belonging Quartet’ and ‘This is the House’, maintain a careful balance between the ethereal and the physical, occupied by the details of material possessions but also the ‘skeletons / in other people’s closets’. Importantly, the nostalgia evoked is not for utopian image of childhood or even love, but for echoes of a past that barely was, such as ‘the words / we forget after birth’.

Frost’s ode to the demise of a video store in ‘Civic’ indicates that death need not always be so serious, however: ‘Whatever killed the dinosaurs / is killing Civics. Already paleozoic, / Blockbuster never saw Rosalie / craft an ark of empty video cases’. Yet it is the series of poems that confront death, the body, home and transformation in the most delicate yet brutal of ways that are the most indelible. A particularly graphic example is ‘5. The Khanun, June 1943’, in the sequence ‘Of the Moment’:

In these instances, Frost’s language is pared back to the bones, sparse and alarming. Salt and Bone is visceral and seductive, its poems as interested in the objective realities of ‘garlic cloves, broccoli, / potatoes and loaves’, as with other, more shadowy matters: the weight of the dead, the fabrication of memory, the search for a story.

This entry was posted in BOOK REVIEWS and tagged Alyson Miller, Zenobia Frost. Bookmark the permalink.
Alyson Miller teaches literary studies at Deakin University, Geelong. Her short stories and prose poetry have been published in both national and international publications, alongside a book of literary criticism, Haunted by Words. Her collection of prose poems, Dream Animals, is forthcoming.