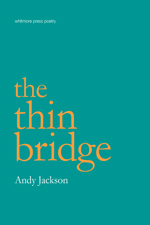 ‘Poetry from a body shaped like a question mark’ That is the tag line for Andy Jackson’s blog, and it perfectly sums up the to and fro in his work. Jackson, who has Marfan’s Syndrome, has said that he came to write poetry partly ‘ to control the way people see me. I’d lived with the staring and comments that having an unusual body brings, and I wanted to be in charge.’

In a recent blog post he deals with this issue; the paradox of having ‘an unusual shape, but no pain’, and the confusion this causes for the ‘concerned stranger’. This new collection, which won the 2013 Whitmore Press Manuscript Prize, condenses these concerns with the confidence it takes to let them be understated, if ever present. The relation of bodies to themselves, and to the world, is rehearsed over and over again, tentatively, ironically, quizzically.

So it is that the collection begins with questions: the first poem (‘What’s possible between us’) is a question and a statement, and also asks ‘Who knows what we are capable of?’ It then poses another, equally perplexing question: ‘Spider, / it is almost terrifying to me – suspended / only by the work of your own body.’ In a recent edition of ABC Radio’s Science Show, a scientist spoke of an atomic clock that was so accurately calibrated that, if it were a tuning fork, once struck it would continue to ring for a thousand years. ‘What’s possible between us’ came immediately to mind upon hearing this, as did the whole book, which this poem resonates through.

The collection’s questions are uncomfortably pertinent, and someone like Jackson, who has been forced by chance and heredity to constantly consider the nature of the body and its genetic origins, is especially entitled to ask them. In ‘the future of genetics’, after a prosaically surreal lecture on DNA,

This mix of the ordinary and the ‘almost a metaphor but not quite’ is artful and precise. In another poem he says: ‘Hugo Williams wrote, Given that poems themselves are metaphors, / I find overt metaphors more and more embarrassing in poems,’ and the book is a kind of bashful, glancing attempt to overcome this embarrassment.

Earlier in his career Jackson wrote and performed a poem (‘I have a hunch’) that literally made light of his ‘affliction’ in an almost medieval fashion: the poem, he has said, was a conscious decision to name the elephant in the room and show what that elephant could do. In this book we have a poem, ‘The elephant’, which is in effect a reductio ad absurdam of the notion of ‘the elephant in the room’ and so slides out from under the weight of metaphor with a flourish.

For readers who know of Andy Jackson’s life and physical disposition, the intent of so many of these poems is clear: DNA, the doctors, being photographed (‘This isn’t about aesthetics, but diagnosis’) or sculpted. But because they are so unassuming in the way they deal with this given, it is quite easy for them to put it aside, at which point the poems acquire an extra layer of musculature and strangeness. This metaphoric sleight of hand gives the book its very particular mix of lightness and tension.

In what is surely the best ‘in a library’ poem anyone has written, the narrator, presumably Jackson, is working in a medical library:

And then, later, the line ‘Spines must be desensitised, due dates stamped’. No matter how often one reads this, how often one thinks ‘Oh yes, his spine,’ the line refuses to play along. ‘No: book spines in a library,’ it says as it stares the reader down. All the way through the rest of the book, and on renewed reading, that hip-joint clicks softly, almost metronomically.

Jackson’s formal skills make the tensile strength of so many individual lines easier to fathom. A sad tender poem about his father’s loss of a leg is cradled expertly in the deceptively lilting form of a terzanelle. ‘Is a wood and plastic limb a tender, loving thing?’ it asks, posing yet another ineffable question.

Later in the book there is a slackening as Jackson travels, and his strengths are dissipated somewhat in the ‘a poet goes to a foreign country: a poet looks at something’ trope which only a few poets benefit from attempting:

Then everything is rewound into a pantoum, ‘Double Helix’ which, with its repetitive torsion perfectly suiting its subject matter, gently wraps up the sadness that Jackson is too polite, as a rule, to make too much of:

There are echoes of Brecht’s more forlorn and personal poetry in lines like these, and The thin bridge has much of the same wry, weary good-soldier feeling as Brecht. ‘Never mind what they say, or do to you’, the collection says to us, because who knows what we’re capable of?

This entry was posted in BOOK REVIEWS and tagged Andy Jackson, Peter Kenneally. Bookmark the permalink.
Peter Kenneally is a librarian, writer and reviewer, and poet. He has appeared in The Australian, Southerly, and Island, among others, as well as in the 2010 Best Australian Poems. In 2005 his suite of poems Memento Mori was selected for the anthology of the Newcastle Poetry Prize, and in 2007 his piece ‘a streetlamp goes out when I walk under it’ was commended in the New Media section of the same prize.