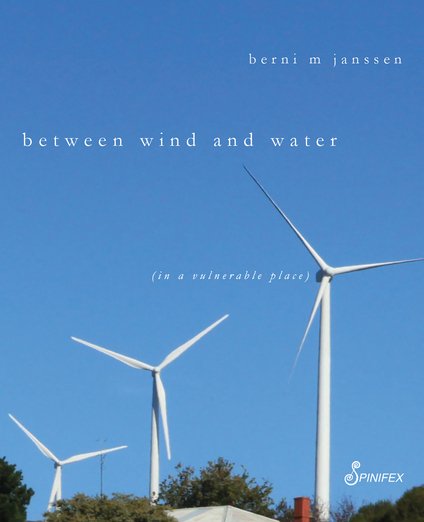 between wind and water (in a vulnerable place) by berni m janssen
Spinifex Press, 2018


In ‘speaking out’, the final poem of berni m janssen’s fifth collection, between wind and water (in a vulnerable place), a choral cry for resistance is offered, a lyric that insists on the ability of individuals to provoke immense change: ‘one voice small forms fight in strength / one voice strong gains another / i’m with you, go boldly’. In a context of climate strikes and impassioned environmental activism, such lines might be attributed to Greta Thunberg, whose reminder that ‘you are never too small to make a difference’ has become the slogan of protestors worldwide demanding action against an impending ecological crisis.

Yet between wind and water speaks of a different kind of truth to power, one which explores the detrimental consequences of climate change solutions that have otherwise been framed as a panacea to the polluting ills of industry. Examining the complex repercussions of the installation of wind turbines in a small rural community, the collection has been described by Javant Biarujia as a ‘cautionary tale’, revealing the nuanced conflicts of corporate vs. community interests while the plundered earth is leached, and can no longer provide. In its analysis of the ways in which battlelines are drawn, between wind and water presents a vision of discord and loss, an image of a landscape and its tormented inhabitants that is rendered by greed, silence, and disillusionment.

Multi-vocal and multi-layered, this collection is comprised of a series of oppositions, not only between the corporate-speak and enviro-savvy gurus who insist on the safety of the turbines and the community which seeks to resist them, but also in relation to ideas about the natural and the material world. Such tension is neatly encapsulated by the figure of Dan—one of over twenty-one characters and voices in the narrative—who as a farmer and poet embodies a mythic, if not mysterious, Australian archetype reminiscent of Banjo Patterson or Henry Lawson—a man of the land who is also in tune with a profoundly Romantic sensibility. Characterised as a ‘steward’ who desires little more than to live ‘full prosperous happy […] without end forever and a day’, Dan presents as a battler aligned with spaces he inhabits, yet keenly aware of the increasing separation between the human and non-human. It is a distance marked by a progressive series of haiku in which Dan observes the physical and psychological impacts of the turbines on the community: ‘south west wind blows hard / another letter of complaint sent / as if hands crush skull’. The intrusion of technology creates an atmospheric shift that results in a sense of suffocation and disquiet, making the ‘body buzz ears hum’, an unseen, creeping force that unravels and confuses: ‘am all over the shop’. In a sequence by fellow anti-windmill activist Vera, whose ‘living is with the earth’, the disruption of the turbines is vividly imagined as an anxious threat that invades the bodies of its victims:

The industrialisation of the landscape is thus conceived in intimate terms, worming inside the minds and bodies of those who live within its vicinity. In the poem ‘Mattie’, the eponymous narrator describes a state of disquiet in which she ‘can’t settle today can’t settle / wind in my bonnet bees on breeze’, an image of jittery restlessness, but also of being imposed upon by a greater force. The effects on self are ‘jangle jarred’, an experience of agitation and loss in which ‘things don’t stick in my head neither pin nor word basic / structures articulated imprecise’.

Catherine Schieve notes in the afterword—an oddly explicatory addition—that such portrayals demarcate the careful balances maintained by the ‘fragile landscape’, an ecosystem which ‘includes our very own bodies, as the work of capitalism affects everything down to our dreams at night’. The invasion of the ‘industrial windmills’ throws the machinations of the natural world into chaos, creating a constant friction between object and subject, each fighting for space in the bionetwork. As Dan writes in ‘early autumn’: ‘fingers of pale light / turbine blades locked together / cannot concentrate’.

Importantly, each of the embattled residents is presented in relation to a singular, extraordinary connection with the natural world, enamoured by a quasi-spiritual understanding of land awarded to those in rural spaces and denied to those on the outside. It is a question of ownership, made clear in the animosity towards the governmental agents and advocates who are unable to explain the phenomena: ‘complaint no 315 draws mister grey suit / thirtysomething urban company tool slickster / this not his territory’. Such binaries are mimicked via the performative language of janssen, whose remarkable conjuring of movement and sound replicates not only the invisible peril that menaces the community, but also the positions from which each actor speaks. As Schieve observes, janssen constructs ‘a full theatre of voices arranged in space’, a cacophony of accents, jargon, and quirks that synthesise into an intricate expression of corporate-lingo, outrage, and grief. More formalised structures and rhyme schemes are reserved for representatives of The Company, for example, who revel in cropped clichés and weasel-words to parody bureaucratic emptiness and repetition without meaning: ‘I’m here to listen, to listen to you, to listen to your concerns. Yes, really listen. Listen really. A real listening’. Alternatively, the opening section, ‘Still’, narrated from the perspective of the landscape, is constructed of long fluid lines and lists, eschewing static choruses in favour of language that is alliterative and verb-heavy, echoing a sense of seasonality, transformation, and impermanence: ‘small feet tickle my dust print into decay a lace of living strung from tails swooping bounding switching surface to air fleet the colour the pattern the texture each to their own and of their passing they home in me guests’. Similarly, in evoking the horror of the windmills, the source of so much dis-ease, janssen attends to a sense of perpetual, fragmented motion, a nauseating refrain of clipped and frantic energy: ‘they spin do spin spun spin spin spin forward, do spin around round spin forward round whirred spinning turning spun spin sizzling speed fast’.

Pages: 1 2
This entry was posted in BOOK REVIEWS and tagged Alyson Miller, Berni M Janssen. Bookmark the permalink.
Alyson Miller teaches literary studies at Deakin University, Geelong. Her short stories and prose poetry have been published in both national and international publications, alongside a book of literary criticism, Haunted by Words. Her collection of prose poems, Dream Animals, is forthcoming.