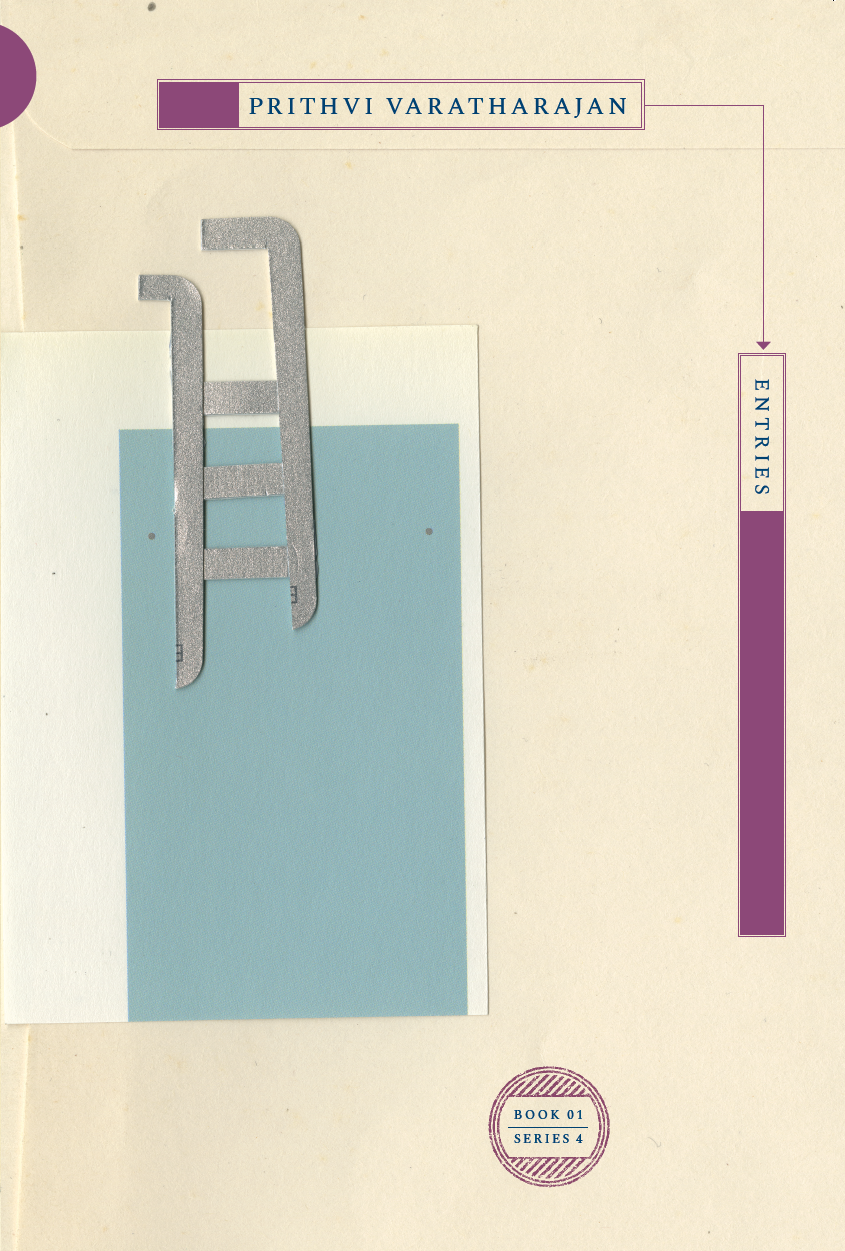 I’ve noticed that Prithvi Varatharajan thinks carefully about offering a true gesture, word or position in every social exchange. I sense that, for him, all communication is an art defined by authenticity rather than decadence. His reflective nature is continuous with the character of the poetics in Entries. The book is a performative documentary of ‘processing’. Its poems refine our social condition into a dramatised, lyricised, essayistic motion of thinking out loud.

There’s a metafictional aspect to this mode of Varatharajan’s work. Its speaker refers to being Prithvi but we should remember that the title of the collection is ironic; these are not simply ‘entries’ in a journal or a log. They have been edited over many years. They are, after all, framed as poems, which is a hint that we ought to be attuned to their craft, particularly their rhythmic and sonic qualities, particularly their line.
I can’t describe Varatharajan’s poetics without reference to his scholarship and work in audio production. It’s revealed by the way that his speaker often becomes detached from one or more of his senses.

‘I was moving my knees and my head to and fro,’ he writes, ‘so it seems I was enjoying the music’, as though listening could be experienced as a Cartesian deduction. The rhythm of his prose is not really metric, but more like a refined conversational variation of longer ruminations and staccato asides. He is particularly good with the silence that follows the final full stop, like that beat of dead air that finishes a recording, or a comfortable pause in dialogue.

It’s invigorating, the ease with which Varatharajan alternates between prose and enjambed verse. It reflects the way his poems toggle between moods. Some of his entries resemble Romantic epigrams and fragments, whereas others are mini-essays. The enjambed poems included here – often ‘small r’ romantic in attitude – create emotional and spatial punctures. Their voice is more immediate, more impulsive than their prosaic neighbours. They reveal the quixotic heart that makes the brain run.

If there’s a narrative tendency throughout the collection, it would be towards scenes of sign-reading. The speaker is often to be found deciphering not only literary or semiotic signs, but also the cues of body language and vocal tone, as well as cosmic signs like coincidence and premonition. In the opening poem, for example, the speaker mentions moving house, ‘which I think was last night’. There is an almost psychedelic sense of possibility in this aside. The question it raises is of greater philosophical consequence than flawed memory or unreliable reality. The speaker’s uncertainty might be ‘environmentalist or anti-modern’. It throws him into a dilemma of capitalist dependency. As he asks in another poem, ‘What are the risks of everyday living’? This quandary is filed away for future consideration.

These poems remind us, maybe, of our better selves. These poems do not drink and dial; they do not hit ‘send’ too soon. In this manner they are a balm to current hyperactive expectations of social responsiveness. Paradoxically, Varatharajan does this by emphasising the provisionality of our being social animals. Entries not only registers so many types of everyday (but by no means banal) oscillation, it seems to revel in them. He openly invites us to celebrate this slow suspension as the most honest position: ‘I am king of ambivalence, so I’m king of being human.’


More by Bonny Cassidy on Cordite Poetry Review →
Prithvi Varatharajan is a writer, literary audio producer, and commissioning editor at Cordite Poetry Review. He has produced radio and podcasts for Red Room Company and ABC Radio National’s Earshot, Poetica, Lingua Franca, Weekend Arts, and First Person. His writing – poems, reviews, interviews, scholarship – has appeared widely in Australian and overseas journals, and he has a book of poetry and poetic prose, called Entries, forthcoming with Cordite Books in 2019. He holds a PhD from the University of Queensland on ABC RN’s Poetica.


More by Prithvi Varatharajan on Cordite Poetry Review →
Zoë Sadokierski is a Sydney-based designer and writer. She has designed more than 250 books for various Australian publishers, and is Vice President of the Australian Book Designers Association. Zoë lectures in the School of Design at the University of Technology, Sydney, where she runs the Page Screen research studio, experimenting with publication models for limited edition print and digital books. She also writes a column on book culture and reading in a digital age for The Conversation.