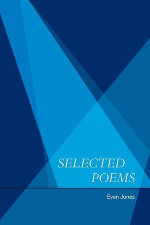 In ‘Poem just after midnight: a summer: at home’, Jones questions:

These lines, suffused with an abiding sense of melancholy (perhaps unsurprising given Jones’s advancing years), encapsulate the contemplations of the poet throughout the collection: the possibilities of language, the significance of the quotidian and the inescapable experience of loss. Along with Chris Wallace-Crabbe, Jones is one of the few remaining Melbourne University poets and writers from the 1950s and 1960s. This circle comprised poets such as Dinny O’Hearn and Vincent Buckley and focused on a more academic style of poetry.

Selected Poems, a compilation of works spanning Evan Jones’s first collection, Inside the Whale (1960) to his most recent, Heaven’s Above! (2011), is also marked by its attention to style and form. In the introduction to the text, Alex Skovron notes that ‘Jones’s work is a formalist’s showcase’. Indeed, with its demonstration of modes such as the sonnet, villanelle, ballad, sestina, ode, epigram, and terza rima, alongside ‘wry or acerbic little poems, including ditties and songs, nursery rhymes, jigs, even mock-doggerel’ the collection reveals, according to Skovron, ‘formal poise and technical prowess’.

The pleasure Jones has taken in poetic form is evident, and is infused with a plea for language to make sense of the complications of the world: ‘Language, talk to me, language / tell me what I know / after forty years – / language, will you show / the way out of the labyrinth … ?’ There is an odd sense of desperation here, perhaps, but more importantly, a self-conscious echo of the Romantic notion that language is a recuperative or regenerative force, able to transform yet also crystalize loss into more coherent and bearable shapes. In ‘Song’, for example, Jones writes: ‘Language is what we share, / and with that, this: / in sheer silence, one / is perfectly alone’. As noted, the tone of the collection is profoundly melancholy – embedded even in moments of wit or twists of humour – and inextricably linked with the anxieties of ageing and sadness. The hope that language might mitigate the sharpness of these experiences is not enough, however, to compete against that forever looming sense of an ending, present in seeing the youth of his son in ‘Generations’, as well as in the pain of words unsaid in ‘Visiting Day’:

The result is an insistent feeling of loneliness, and the suggestion that even in the joy of living things, the inevitability of death is a perpetual – if clichéd – shadow that haunts us. Somewhat counter-intuitively, there is also a saccharine quality to Jones’s work here, highlighted by the lyrical tone and adherence to formal structures which limits a diversity of expression. Nonetheless, these poems are elegies, recognising that all lives are caught in the process of dying:

The role of the poet, then, is to translate ‘all ache of time’ into meaning, memory, and, given Jones’s dedication to form, order – as captured most evocatively in ‘Transfiguration and Death’, a poem about a relative ‘now at the last’, who ‘tangled and untangled simple words’. Throughout the collection, the enormity of death is countered by a focus on the small details of living, such as the buying of sausage meat for a ‘large and lively neutered tabby’, children sleeping ‘after a story from the Brothers Grimm’, and drinking with friends, ‘with OK wines and breezier talk’ – the quiet ways of passing time and of silencing the voice shouting to ‘Get into the grave, get into the grave’.

Arguably, the consequence of Jones’s loyalty to formal structure is a sense of predictability and detachment, most notably in the use of alternate rhyme schemes. The ‘imaginative flair’ described by Skovron is lost in these instances, as poetic rules suffocate the nuance of the emotion or experience under examination. Whilst undoubtedly lyrical, particularly in those poems relating to domesticity, friendship, and family, and, efforts at the tragi-comic thus seem, at best, contrived, and at worst, clumsy and forced, such as in ‘Boxing On’:

Elegiac, lyrical and formalist, Jones’s work is invested in understanding the ‘language beating in your pulse’. Obsessed with the play between words and structure, the risk of this collection is that it is overwhelmed by technicalities, and the Romantic urge towards melancholy and the sentimental. However, it is the underlying presence of ‘figments of darkness’ as well as the attention to the minutiae of ordinary lives that forges a sense of connection through a shared sense of a puzzle too difficult to solve.

This entry was posted in BOOK REVIEWS and tagged Alyson Miller, Evan Jones. Bookmark the permalink.
Alyson Miller teaches literary studies at Deakin University, Geelong. Her short stories and prose poetry have been published in both national and international publications, alongside a book of literary criticism, Haunted by Words. Her collection of prose poems, Dream Animals, is forthcoming.