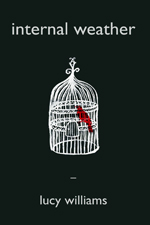 While Lucy Williams’s Internal Weather is split into the unavoidable cycle of life – birth, childhood, and death – the collection as a whole is a love song, a tribute to ‘difficult events’ and ‘unattended shadows’. The poems emphasise how the ‘forming of words’ and the ‘making of stories’ locates these instances in specific moments of memory and time. Indeed, love is the lung-set of Internal Weather: love for a child, first love, romantic love, love lost, love for the dead, love that ‘surprises … like religion’ and thickens ‘doubt into determination’.

Fittingly, then, much of Williams’s imagery, with its striking use of defamiliarisation, is embedded in notions of familial connection, which are simultaneously ethereal and visceral. There is the wonder of family in ‘baby’, for example, ‘how all of us / are linked by blood—by memory and hope’, and in ‘magnolia’, the ‘ghost’ of afterbirth, which ‘moves inside me again as though my heart has fallen’. It is this grounding in the bodily or the ‘real’ which resists Williams’s poetry, more often than not, from lapsing into sentimentalism – instead, this approach anchors notions of love and loss with a corporeality that is often as tragic as it is beautiful, if not domestic. This delicate balance is captured particularly well in ‘miscarriage’; ‘I’m sorry that you will never learn / about the human heart—unbuttoned / like a giant pocket’, and in ‘hindsight’; a haunting image of collision and death:

The graceful fluidity of Internal Weather’s prose poems – sometimes fragmentary and elliptical, other times perfectly compressed micro-narratives – emphasises a storying of memory or operating as a keep-safe in its most literal understanding of protecting precious things. The poems are undoubtedly cohesive, but the distinct changes in style and form are suggestive of memoir in the epistolary tradition; or, more prosaically, a scrapbook. It is an image most evocatively captured in the poem ‘the place where things collect’ which describes ‘pine-needle memories’, flashes or pricks of history that culminate to define the generations of a family: ‘a girl on a swing’; a crying mother; ‘emotions boxed like groceries’; a birth that ‘filled her / with dumb animal love’; four funerals a reminder of ‘the people we want to protect but can’t’.

Williams writes of bodies and night skies, a child’s paintings and chasing dogs, ‘hearts bruised as oysters’ and ‘guilt like spoiled fruit’. These are ordinary things – the experiences and encounters of the everyday – but there is nothing clichéd about Internal Weather, with its constant hints of darkness and fear, and its underlying anxiety about the ease with which ‘the beginning or the end’ might occur. It is an edginess best observed in Williams’s talent for the simplicity of images that border on violence and despair that suggests the threat of an abyss from which the subject might not return: a ‘tiny coffin’ is likened to ‘a huge mistake in the arms of men’, while the silence of a dying son is ‘a baby / that wouldn’t stop screaming’. In the eponymous poem,

The synthesis of materiality with the abstract denotes the quiet beauty of this collection. Rich with hearts that ache ‘like a caught fish’ and oceans that ‘boil over and dry up’, Internal Weather is, as noted, a song about love, but it is simultaneously an ode to small pains and large tragedies, ‘the phenomena of the earth’ and all those things ‘that shocked or floored us’.

This entry was posted in BOOK REVIEWS and tagged Alyson Miller. Bookmark the permalink.
Alyson Miller teaches literary studies at Deakin University, Geelong. Her short stories and prose poetry have been published in both national and international publications, alongside a book of literary criticism, Haunted by Words. Her collection of prose poems, Dream Animals, is forthcoming.