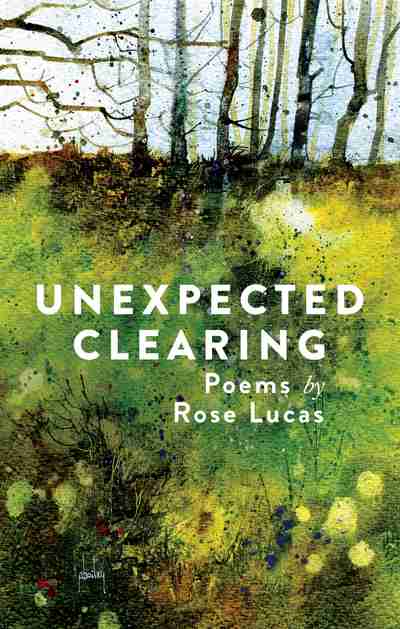 In ‘Balancing,’ Rose Lucas describes how Philippe Petit, the French high-wire artist made famous by his walk between the Twin Towers of the World Trade Center, ‘launched into a fitful middle space.’ With a ‘steady grip of muscle,’ Petit is imaged as a ‘machine riding air and sky,’ defying gravity as he dances ‘from element to element.’ The poem, which is part of the opening sequence of Lucas’ second collection of poetry, Unexpected Clearing, offers a delicate yet startling vision of the major preoccupation of the series: the connection of the human with the natural world. Certainly, with ‘feet curled around earthen ropes,’ Petit floating between the skyscrapers of New York is an apt metaphor, located precariously within an ‘aerial corridor’ that speaks of the liberation of open skies (and of flight), yet also of the entrapments of a constructed environment. Moreover, in a post-9/11 context, it is impossible not to also recognise the suggestion of violence and terrorism at play – that the Twin Towers fell makes all the more poignant Petit’s suspension between them, evoking a balancing act between terror and freedom. With its attention to spaces both inhabited and wild, and motifs and images which repeatedly connect the most routine elements of life with the vicissitudes and beauty of climate, landscape, and animality, Unexpected Clearing is an exploration of the need to have ‘roots in soil’; or, indeed, in the sky.

As Cassandra Atherton has observed, ‘Lucas’ poems are composed of vivid bursts of colour,’ a feature made especially apparent in their interest in the fluctuations of the seasons. In ‘Cool Change,’ for instance, ‘the air on Albert Street,’ with its ‘distant promise of / moisture,’ is as pink as the ‘clusters of quivering’ roses clinging to the garden arbor. In ‘Orb,’ ‘the world is / a ripe peach … / delicately furred,’ while in the sequence dedicated to paintings by Monet, the ‘dizzying’ heat of summer is captured by the ‘swirling bright pink blooms — / clustering on leggy stems … blowsy and heavy-headed / across a swathe of summer blue.’ Even sleep is figured in shades that suggest the tones and textures of colour, such as in ‘Reaping,’ which portrays the unconscious mind like an unfurling of fabric, a ‘rich swathe’ unleashing ‘the deep curve of dreaming.’ It is an image that re-appears in ‘Bolt,’ which envisions a new day as ‘rolled out before us like a bolt of cloth / vivid and / tumbling, / this particularity of sunshine.’ There is, admittedly, a tendency towards sentimentality in the first section of the collection, in which similes of and references to nature maintain a saccharine quality. The final lines of ‘Orb,’ for example, detail the juice of the peach running from ‘lip, to wrist, / sticky / to the elbow,’ to conclude: ‘taste this world; / it is the sweetness of your / entire life.’ This is mitigated, however, by the stark juxtaposition in the concluding stanza of ‘My Mother in Hospital,’ in which a glowing bag of mandarins contrasts against ‘the antiseptic neutrality of the ward.’

In the merging of images of natural environments and place, however, Unexpected Clearing gains darkness and complexity. In ‘Cloudless: Australian Summer,’ there is a violence inherent in ‘the pounding of the sun,’ as ‘houses crouch / helpless’ beneath ‘the simmer / of sky.’ ‘Clunes, Central Victorian Goldfields’ offers a desolate portrait of a town swept dry by a ‘north wind’ that swirls against the ‘closed / faces of shops’; in a town where ‘the heaviness of / gold lingers / in the air,’ the only sign of wealth is a ‘sudden flash of crimson rosella’ against the ‘heady roll of blue.’ These locations are not always geographical: ‘Daughters,’ which uses clichéd images of spring to depict the ‘unfurling’ of girls who push ‘lanky into the air,’ also includes a haunting evocation of a suffocating beginnings: ‘these girls who were pods, / knuckled close into / a fecund dark.’ Certainly, in many of Lucas’ poems, there is an echo of trauma or unsettling forces; ordinary life is marked as ‘relentless,’ for instance, while a massage results in the ‘undoing’ or unbecoming of a body and its histories:

The sense of exposure and discomfort is significant here, highlighting a fascination in the latter parts of Unexpected Clearing with moments that focus on abjection and ambiguity. In ‘Eye,’ Lucas’ description is as erotic as it is unnerving, a visual haunting akin to the first images of Buñuel and Dalí’s Un Chien Andalou: ‘Viscous / jellied lens through which a / pour of silken light / might enter me.’ While the image is undoubtedly sexual, it also remains connected to the natural world, of floating ocean life, compounded by the final lines of the poem: ‘a still pool / drawing me in.’ The reality of the body is further explored in ‘After Bosworth Field,’ which narrates how the remains of Richard III are scraped into the mud after battle, left ‘quite broken’; he is ‘an abject thing’ destroyed by ‘the sweated force of body slammed on human body,’ now only a ‘sedimentation of bone and mud.’ These poems are striking and graphic, a reminder of the human return to the ground – of life and death – but also on the violence of the body more widely, of its penetration, absorption, and collapse.

It makes sense that in a collection obsessed with location – with the geographies of landscapes as well as of bodies – that there is also a drive towards escape, particularly in terms of a desire to occupy in-between spaces. In ‘Not Here,’ a protagonist ‘checks into a suburban motel’ in order to experience ‘the neutral sparseness of the room,’ a place defined by transience. Similarly, in ‘Night Road,’ a rural landscape is traversed as though in a dream, a kind of liminal inhabitance. In this strange and ambiguous realm, morning is like ‘another place / distinct from the velvet of night’s surrender, / from sleep’s strange, adjacent space — / a somewhere country without shadow.’ The impulse, nonetheless, is always towards a sense of grounding, as in ‘Night Fog,’ which draws towards ‘the tenacious possibility of home.’ Indeed, while Unexpected Clearing often brings together opposing elements, the emphasis is not on collision but on fusion. Like Petit, whose dance across the cable wires made ‘the world seem[…] / solid’ –albeit a pre-9/11 delusion – Lucas’ poems are invested in harmony rather than fragmentation, in how ‘we forge our lives’ through difficulty, but also through the mundane experiences of the everyday.

This entry was posted in BOOK REVIEWS and tagged Alyson Miller, Rose Lucas. Bookmark the permalink.
Alyson Miller teaches literary studies at Deakin University, Geelong. Her short stories and prose poetry have been published in both national and international publications, alongside a book of literary criticism, Haunted by Words. Her collection of prose poems, Dream Animals, is forthcoming.