Review Short: Rose Lucas’s Even in the Dark 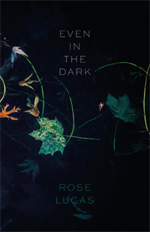 Even in the Dark by Rose Lucas
UWA Publishing, 2013

Rose Lucas is a name often found in anthologies, awards and shortlists, so it is no misnomer to call this first collection of poems long-awaited. Time calibrates the scale in Even In The Dark, which span detail in lives from pre-conception and birth to the discovery of a cremated woman’s body 40,000 years in the earth.

The word ‘Even’ from the title gives notice to the grace with which each subject, word and sensation are dealt. With ‘In the dark’ Lucas shows us, with a shortened visual depth of field, a space of shifting equanimity. There is no excess, no jostling assertions and we are not displaced. Rather, with a rare and fascinating steadiness of poetic crafting, a strange familiarity of closeness coheres wild reverence for the elemental and is sustained. Lucas’s ‘dark’ is a listening place and it is not opaque. In these poems the focus is sharp and meticulously directed, Lucas has deftly supplanted our watchfulness with her own. From ‘Weekender’:

Recently a friend quoted the painter Margot MacLean, who rendered animals ‘as if they were disappearing’ I thought of Rose Lucas’s tender tracing of the inhabitants of her poems. They are not gone, it is an illumination of their temporal presence, the brevity of our shared gaze highlights our gentle expectancy for their re-emergence and ‘marks the possibility of return’

This transient and shifting field of relations resonate through each poem’s syntactical balance – its rhythm and pattern follow with precision the rich tonality of Lucas’s visual and aural perceptions, delivered with just enough tension to allow a line to run free or a word to drop and hang alone where it dances, or stops.

Within the clarity of every line is found, illuminated, the outline of other. As in the following lines from ‘Balloon’:

The centerpiece of this collection, ‘Lake Mungo: Series’, oscillates between landscape , country and the vivifying effects of discovery around the dry lake system, Mungo, in south western NSW., It was here in 1968 that archaeologists discovered the 40,000 year old cremated remains of a woman, the oldest ritual cremation demonstrated anywhere in the world. It is described in the introduction to the series as an ‘unearthing’. Each poem feels marked with this sifting through hands, exhumed discovery and silent decay present in the singularity of each image where nothing disintegrates yet the beyond can consume. From ‘iii) Mungo Woman’:

The fourth of five sections to Even In The Dark, Jacaranda Time, tightens its aperture around mothering, birth and dilated spaces of familial love, availing its resistance and resilience as entry points of light to the darkness where human beings dwell, where ‘human nature’ is played out and consoled.

Hélène Cixous, French professor of Philosophy, poet and playwright, speaks of writing as a wandering, because it conveys the pas à pas slowness of a questing which is humble, ‘close to the earth – humus.’ In Lucas’s poetry we are presented with common ground: ‘sweaty hands’, ‘muddy puddles’ and ‘dusty boots’, the ‘loamy darkness of soil/ drawing me down’ these accretions of slow movement ‘quivering to the pulse/of other places, a distant vanishing point/ between divergent tracks.’

Lucas’s poetry shimmers with the attention breathed across it, attunes our ear to desire, draws us close to the poetic image and whispers to us of a contemplative time eternally slipping beneath ‘present’ and ‘possibility’.

This entry was posted in BOOK REVIEWS and tagged Amanda Joy, Rose Lucas. Bookmark the permalink.
Amanda Joy lives on the outskirts of Fremantle, Western Australia and is the author of two chapbooks, Not Enough To Fold (Verve Bath Press 2008) and Orchid Poems (Mulla Mulla Press 2001) Her poem 'Almost Pause/Pareidolia' was highly commended for the 2013 Blake Poetry Prize.