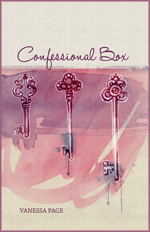 Australian poet Vanessa Page’s latest collection, Confessional Box, is equal parts personal and critical, examining emotional relationships with a terse, engaging style. As the title suggests, there is a strongly self-aware element to Confessional Box. The poems are relatively open, encompassing a range of points of view and personas, but these are not wholly simple reflections of human relationships. Rather, Page presents a series of evolving sections, embellishing on memories and balancing broader criticisms against more personally orientated notions of access and invitation.

In an interview discussing the collection, Vanessa Page alludes to personal experiences and observations as sources of inspiration, implementing memories into different settings in order to create adaptable, relatable fictions. In this sense, the collection is highly effective. As the title indicates, there is an overarching focus on ‘unpacking’ memories and perceptions, but unlike a conventional confessional box, Page’s collection is not exclusive or exclusionary. However, it is certainly not a passive receptacle, nor are Page’s speakers demure confidantes. Page relishes familial settings and romantic encounters between her speakers, but connections are often fraught with what has been left unsaid, metaphorically and literally distanced by a range of imageries.

In ‘Wife’, a poem strongly reminiscent of Gwen Harwood’s ‘In the Park’, Page’s speaker shies from a perceived threat of depersonalisation:

Tension between natural features and human constructions is played out across the woman’s body. Page’s speaker observes the ‘otherness’ that is the ‘wife’ and her many categories of non-human features, while also lapsing into accusing tones and confrontational second person pronouns. The speaker’s pause and reference to ‘a sudden domestic sketch’ highlights time as another form of distance, suggesting anxiety about this as a potential future state, and the passive warning that the viewed female figure offers via her ‘tail lights’. Criticism in this poem is not levelled at the depersonalised wife, but rather at her lack of voice and human qualities, and also questions the speaker’s activity in response.

In ‘Arrival of the patriarch’, Page engages with the role of an older male figure in a young family, with a tone that is equally critical and compassionate. The male persona is a ponderous anachronism, distanced from the familial setting despite his professed ‘arrival’. Page’s speaker is sympathetic, but matter-of-fact in the following extract:

The patriarch ‘keeps his feet flat and still / planted on the earth’, signalling metaphorical stagnation, but also linking him firmly to the earth and originary notions of growth. Page finishes the poem with an intriguing reference to saddles, seen in other poems in the collection, and here used to refer to a romanticised physicality, orientated around a masculine-typed perception of control:

The image cements her almost affectionate critique of this isolated figure, locating the patriarch in a romantic, stockman’s role and simultaneously away from the immediate lives of other human figures.

In ‘Saddle dreaming’ Page depicts another male persona’s distance from his family home and wife, subsumed into her maternal role, and adopts a third-person point of view, permitting even sympathetic treatment of both personas. The husband’s affection is divorced from the dehumanising reality of his wife’s lifestyle:

Page collapses wife and children into one line, furthering this loss of agency by referring to the wife as a passive object, ‘sleep pulls through her like an accordion’. The distance between main figures is presented as an ironically tender lack of understanding, rather than intentional violence, although the potential for this is highlighted:

Throughout the collection, human relationships prevail in spite of such distances, but are certainly not spared from criticism.

Page demonstrates keen interest in poetic treatments of distance and travel, as they impact on human relationships. ‘Postcard’, for example, transcribes the speaker’s beloved into the body of her poem in lithe phrases. The geography of the body here to be cherished, while the female figure examined in ‘Territory’ is ‘a pastiche of someone else’, cobbled together from impersonal descriptions. In the final section of the collection, Page embraces even more geographic images and links these with returns, home-orientated poems, and dedications, creating a more optimistic conclusion. Her final poem, ‘Postscript’, beautifully summarises the journeys undertaken, particularly in the final stanza:

Confessional Box immediately appears to deal exclusively with personal memories and emotions, but quickly reveals much broader themes, complete with technical links throughout the collection, and a sensitive focus on human experiences throughout.

This entry was posted in BOOK REVIEWS and tagged Siobhan Hodge, Vanessa Page. Bookmark the permalink.
Siobhan Hodge has a PhD in English literature. Her thesis focused on Sappho’s legacy in English translations. Born in the UK, she divides her time between Australia and Hong Kong. Her chapbook of reflections on Sappho, Picking Up the Pieces, was published in 2012 as part of the Wide Range Chapbooks series. She is currently the Reviews Editor for Writ Review and an Associate Editor for Rochford Street Review. She has had critical and creative works published in a range of places, including Westerly, Axon, Contrapasso, Peril, Plumwood Mountain.