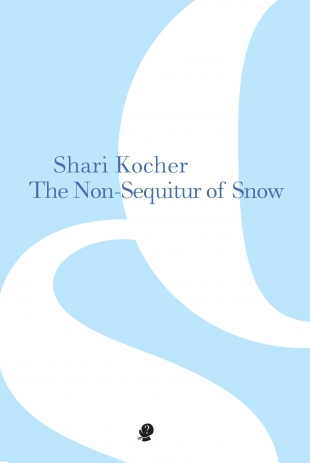 The Non-Sequitur of Snow by Shari Kocher
Puncher & Wattmann, 2015

Dr Shari Kocher’s The Non-Sequitur of Snow is her first full-length publication, following nearly two decades of feature poems in a range of Australian and international journals. There is an airy sense of activity throughout this volume. Kocher’s poetic settings range freely between the material and the imagined, forging connections across generations, yet coming through with surprising steel in some pieces. Structurally the collection is diverse, flowing, and occasionally more experimental.

The titular poem pairs with another, ‘Snowmelt’, in the collection’s opening. The latter sets a musical tone with a strong focus on observation rather than direct action, while ‘The Non-Sequitur of Snow’ links this with a more questioning atmosphere and sets up for a more hands-on approach. This investigative inclination very much sets the tone for the rest of the collection, as a series of narrative speakers examine links between family members across generations. In ‘The Non-Sequitur of Snow’ the speaker details a tangled series of assumptions, compounded finally in a delicate metaphorical exploration of pregnancy:

The uncertainty and anxiety for answers that commences this poem neatly folds into a scene of internal logic. Kocher’s speaker makes sense of her own questions and assumptions, priding the link between mother and daughter as the culmination of these ruminations. At the same time however, this relationship is not without its issues, as demonstrated in poems such as ‘Spoons’ where:

The speaker’s link with the mother is interrupted by consumptive imagery, pushed to one side as a passive observer of the mother’s fixation on the idealised boy. The poem slips into ambiguity: is the boy her son, or her lover? The absence of obvious distinction compounds the tensions within the piece. Sibling rivalry in ‘My Singing Empty Hands’ equally acknowledges the potential for family relationships to be a source of contention rather than wholly uplifting and supportive experiences.

The role of maternal figures remains a central and poignant focus across this text. It pairs interestingly with a recurring note of disappointment whenever Kocher engages a male persona. The forgetfulness of the lover in ‘Strawberries’ in contrast with the speaker’s vivid exploration of their shared memories, is an elegant poem of reproach. However, Kocher does not shy away from examining far more brutal scenes. The nightmarish murder of four-year old Darcey Freeman, thrown from a bridge by her father in a fit of cruelty as a result of a bitter custody battle in 2009 is strikingly captured in Kocher’s ‘The Bridge.’ Kocher offers a disjointed, chilling narrative of the father’s thoughts, repetitive and entitled, and oppressively misogynistic. The death of the child is a symbolic severance of the links between mother and daughter, snapped in an act of cruel selfishness while Darcey’s brothers voice their confusion. Kocher’s portrayals of children in The Non-Sequitur of Snow emphasise this helplessness paired with a need for speech.

In addition to these emotionally charged scenes, Kocher demonstrates sharpness in other senses of the word in poems such as ‘Cannibals at Dinner in Formal Attire.’ The poem’s cyclic structure and unlikely scenario reuses and reimagines the same words throughout the piece, highlighting dangers of assumption and the malleability of meaning:

Self-destructive tendencies are presented along with confrontational bodily imagery and unlikely personifications. The central female persona is not the speaker, but an evolving figure on the cusp of understanding. Amongst the most interesting features of Kocher’s collection are her explorations of bodily imagery and the confrontational or evolving ways in which a body-in-pieces is broken and received.

The Non-Sequitur of Snow is a successful combination of lightness and sharp attention to problematic details. The structural shifts of the poems complement the constantly evolving familial relationships detailed within, while bodies are broken down to be better understood. Kocher’s stylistic approach is at once immediate and accessible, yet sharply layered with deeper investigative purposes.

This entry was posted in BOOK REVIEWS and tagged Shari Kocher, Siobhan Hodge. Bookmark the permalink.
Siobhan Hodge has a PhD in English literature. Her thesis focused on Sappho’s legacy in English translations. Born in the UK, she divides her time between Australia and Hong Kong. Her chapbook of reflections on Sappho, Picking Up the Pieces, was published in 2012 as part of the Wide Range Chapbooks series. She is currently the Reviews Editor for Writ Review and an Associate Editor for Rochford Street Review. She has had critical and creative works published in a range of places, including Westerly, Axon, Contrapasso, Peril, Plumwood Mountain.