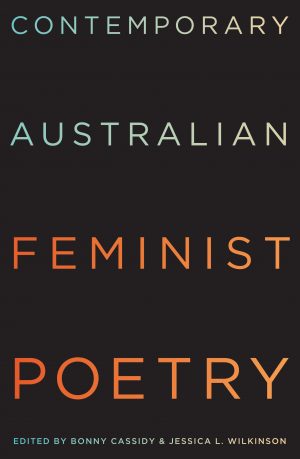 There is much of value in collections like these. Contemporary Australian Feminist Poetry sets up a layered answer to the question, ‘What is feminist poetry?’ There is no demand for urgent action, but rather a subtle, cresting sense of activism. Family, death, art, cyborgs and ancient history are all raised for comment, with a recurring central focus on the importance of individual voices.

The collection draws from the works of women (and a few men as well) located all over Australia, feeding into a central idea paraphrased from Rachel Blau DuPlessis by Ann Vickery: ‘a constellation of strategies’ rather than one homogenised approach towards feminist voices among hegemonic identities. There is a reassuring note of solidarity throughout the collection, but a simultaneous celebration of diversity in style, tone, theme and foci. This collection shares voices in collaborations, dedications, and solo strikes; there is no ‘one feminist voice’, but Cassidy and Wilkinson in the introduction recognise a shared sense of responsibility in the present. Diverse subject matter and direct styles abound.

In generating the collection, Cassidy and Wilkinson stipulated that none of the poems contained within could be previously published; motivated by a goal that ‘we would come face to face with “processes of consciousness and of writing” that reflect how people are using the page in Australia’ (Jennings, ‘Introduction’). These are on-going works, reacting to twenty-first century needs. In this sense, despite the editors’ professed desire not to document an écriture féminine, this is a necessary consequence of completing such a work (‘Walking through glass’, xiv-xv). There are risks of essentialism when compiling a collection like this. Hélène Cixous’ model of écriture féminine has attracted criticism for being excessively utopian and ahistorical. Pam Morris identifies some of these major criticisms, particularly concerns of biologism or essentialism in Cixous’ demand that a woman ‘write herself’ through returning to the libidinal drives of the body. This need for spontaneity can be seen as affirmation of stereotypically ‘feminine’ emotionalism and irrationality.

However, Cassidy and Wilkinson have offered much to counter this restrictive interpretation: there is no strict uniformity of style, tone or agenda; female and male voices are commingled; and the ‘selves’ within these poems are often layered presences, rather than immediately personal or self-referential. The voices within the collection are varied, alternately outpouring and remote, demanding and forgiving, but always resolute, and frequently with a note of rebuke. Poems are written by individuals, in collaboration, and in dedication. There is no one ‘feminist voice’ within the collection.

The structural and thematic implications of excessive quotation in Gabrielle Higgins’s ‘She will be praised’ dominate the poem. ‘Judith’, a Hebrew name which translates to ‘she will be praised’, completely frames the poem, broken into fragmentary quotations by three other poets: Judith Rodriguez, Judith Wright and Judith Beveridge. Higgins’s style borders on referential iconography, weighed against the irony of the final lines ‘(to the) subtlest form                 trying / each thought like a key’. In order to be recognised, subtlety is not necessarily going to get results. It is vital to breathe life into names. The speaker of ‘Visions’ by Ali Jane Smith, also early in the collection, shares a similar anxiety, as she is ignored by a procession of male icons – David Attenborough, Tony Robinson, Monty Don, Brian Cox – only to be finally addressed:

Smith’s speaker struggles to balance meaning-making while contending with a barrage of domestic chores and images, never quite reached by the suggestions of the male figures. Professor Beard’s representation pushes agency back into the speaker’s hands via directives and questions, but the work is still hers alone.

Traditionally ‘organic’ visions of femininity are teased in Meredi Ortega’s ‘Cyborg me’:

Ortega’s spilling over of agency outside of traditional body confines runs up against the agony of bodily ownership, soaked in imagery of abuse and wearing thin against external intrusions in ‘Unbecoming’ by Jo Langdon. All throughout the collection, Cassidy and Wilkinson have presented a range of ‘bodies’ to voice their grievances, circulating the recurring need for stronger feelings of autonomy, freedom, and safety. Elif Sezen’s ‘Immunosuppression’ embraces medical terminology to address this lingering gap between on-going national and international issues of lack of agency:

This idea that ‘there is no end’ is a recurring undercurrent to the collection. These are not ‘all’ Australian feminist voices, nor are these all of the possible angles in need of critique. Cassidy and Wilkinson succeed in taking a living tissue sample, but no one poet is offering answers to all of the concerns within.

Pages: 1 2
This entry was posted in BOOK REVIEWS and tagged Bonny Cassidy, Elif Sezen, Gabrielle Higgins, Jessica Wilkinson, Kate Jennings, Meredi Ortega, Rachel Blau DuPlessis, Siobhan Hodge, Susan Fealy. Bookmark the permalink.
Siobhan Hodge has a PhD in English literature. Her thesis focused on Sappho’s legacy in English translations. Born in the UK, she divides her time between Australia and Hong Kong. Her chapbook of reflections on Sappho, Picking Up the Pieces, was published in 2012 as part of the Wide Range Chapbooks series. She is currently the Reviews Editor for Writ Review and an Associate Editor for Rochford Street Review. She has had critical and creative works published in a range of places, including Westerly, Axon, Contrapasso, Peril, Plumwood Mountain.