Not Touching the Void, Listening for the Drip: Witnessing Water Cycles 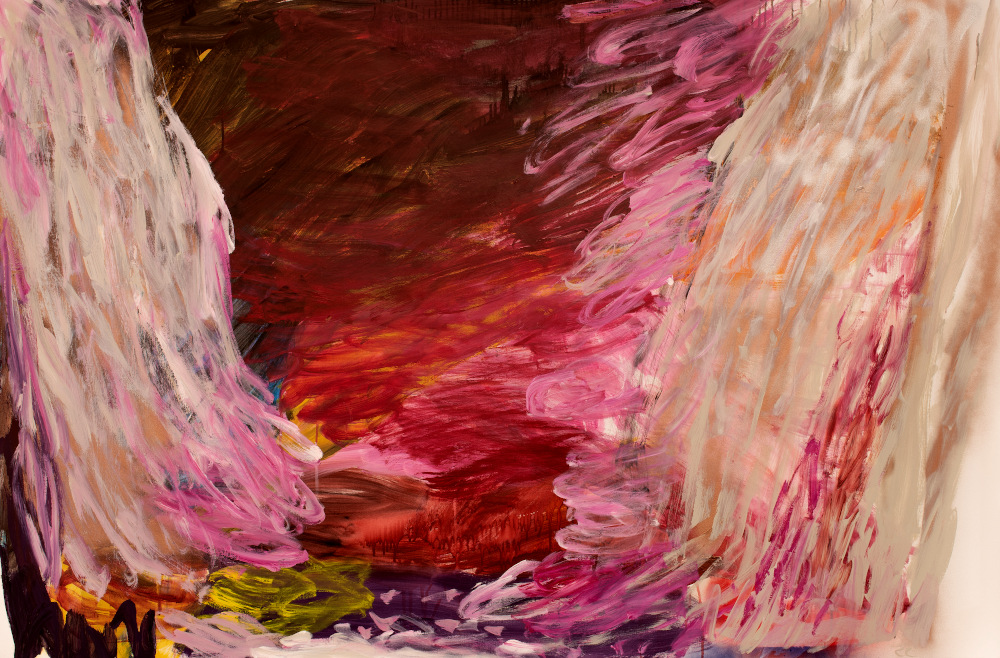 ‘The Watermaker’ by Catherine Cassidy

This year I have recently exhibited a body of work related to my thoughts on ephemeral water, markings and patterns, rivers and lakes that come and go in arid regions of Australia.

This painting titled The Watermaker comes as a natural progression of these ideas. As a landscape painter, used to travelling to remote and arid regions to develop work, I have been very lucky in lockdown to have this storehouse of imagery to dwell on and enlarge and to have had a small window of brief travel opportunity from my Sydney studio into Victoria.

As I researched the area of ancient volcanic ground along the Loddon and Coliban Rivers in Central Victoria alongside my daughter, poet Bonny Cassidy (incidentally my old home grounds) my thoughts pushed further into the origins and beginnings of water systems and I began to think on how water is born, its actual beginnings in deep time.

The idea that a river is born at all and in fact can be born from a volcano, stuck with me and I hope it has made its presence known in this work.

As much as a painting can really only represent its own truth, sometimes it can also hold something of a deeper nature, a resonance of time and motion and hopefully, in this case, a broader echo, almost a journey to the centre of the earth.

As these ideas developed and as imagery began to become manifest, the underground, secret world of water became quite insistent. What is happening, has been happening down there, all that falling and rushing and spilling of invisible water.

Although my research along these Victorian rivers and watersheds have specific names and are bound to maps and technical indications of place, I wanted to unbind them, to make an image which carried a much wider resonance than these written signs we see and follow as travellers.

My understanding of an Eastern view of the ‘void’, a continuous presentation within a painting, is my constant companion as I paint and stands the Western view of the void as a place of almost negation, of nothingness, on its head.

It holds the most generative part of the painting. The water falls, it is always falling, even unseen. My mark making, mingling with thoughts of time and secret tides, became a shower of this continual presence and holds all rivers and their making.

‘On the limited surface of a painting, later with the heart, as in the void.’
–Shi-T’ao


More by Bonny Cassidy on Cordite Poetry Review →
Catherine Cassidy is a Sydney-based painter, born in Ballarat, Victoria. Cassidy works within abstraction and concentrates on an ambiguous rather than a singular view of the landscape. Her work lifts away from the accepted Western canon of description of place and form and this plasticity of thought and action allows both paint and mark to carry a powerful vigour and story of their own. She is represented by AK Bellinger Gallery.