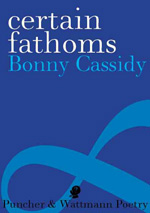 Bonny Cassidy’s Certain Fathoms encourages readers to feel for the full extent of her poetic linkages, presenting a series of poems broken into two parts, inviting immediate and further reflection. The poems outwardly celebrate subtlety and linkage through their fragmentary structures, including much natural imagery and a quiet but definitive speaking voice. Cassidy’s poems feature a strong focus on recognising different possible identities, as her speakers. Natural imagery and a variety of structural approaches work together to create, as Alan Wearne has observed, ‘a mapping-out that is organic’, focused on highlighting connections above and below the surface of otherwise everyday actions.

Cassidy is a Melbourne-based poet and academic who grew up in southern Sydney. Certain Fathoms is her second publication, following her first chapbook, Said To Be Standing. The sophistication of Cassidy’s poems invites further reading; most of the poems consciously create links between other writers, geographies, figures and environments. Linguistically however, the poems are very open, inviting immediate interpretation as well as later reflection. Much of Cassidy’s imagery is strongly sourced from nature, which ties into the occasionally fragmentary structure of her poems to suggest that she is most interested in creating interconnected spaces.

For example, ‘Autopics’, ‘Waitakere’, ‘Titirangi’, ‘Magnitude’, ‘Kai iwi (1)’ and ‘Kai iwi (2)’ are presented as a series of fragmentary poems, referring to locations in Auckland, including the Kai iwi lakes. These pieces depict the interaction between these natural spaces and human interference in the form of motorways, streets, and fencing, with tones that range from matter-of-fact, to bitter, to more optimistic. Cassidy’s speaker is never static: always observing and shifting to match each fragment. These pieces are not entirely bitter; new relationships are created in ‘Kai iwi (2)’, in which the speaker dismisses potentially destructive intrusions on the natural environment as ‘puny’. The physically fragmented structures of these small poems also indicate that intrusions can be seen as inlets, rather than destructive acts, permitting new views and interpretations to arise.

Human relationships with nature are also explored in the poem ‘The waiting shape’. In this piece Cassidy stresses an imposed connection on natural and human-based imagery, displacing the influence of one over the other via a consistent focus on fluidity:

Tension informs the opening line: a hidden water source is in movement and compromises a foundation, resulting in an immediate halt, leading back to a natural setting. This couplet has instantly established a clear hierarchy of the natural energy over human-domestic stasis, inviting intrusion or peaceful entrance through the ‘crack’, or alternatively, forecasting disaster and the return to overt primacy of natural images. The forest too is paired with a sinister tone and implications of unseen, or else not entirely visible, screened, violence. In the central couplet, human elements rise to a more active role, implying a clash, but also failure, in the ‘descent’ of cables.

Ultimately this hostile atmosphere is downplayed by the poem’s end, as the ‘table drifts’, entering a stage of movement that mirrors the current of the ‘underwater streams’, but not entirely possessing this type of movement for itself. In this particular clash, the natural and human elements have not reached a peaceful conclusion, but more of a measured retreat. The decision to structure the piece in couplets, despite the absence of an internal rhythm that would demand this, indicates a focus on binaries and contrast in the poem, already emphasised by the imagery and enjambment.