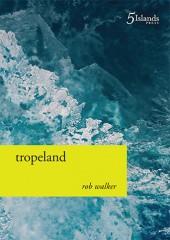 South Australian poet Rob Walker’s latest collection, tropeland, is exceptionally playful. Puns and wry twists in language are balanced with humour and a self-conscious sense of otherness, the speakers always slightly displaced from their subjects. Walker is not pessimistic in this process however; there is a consistently optimistic tone throughout tropeland, as well as a canny awareness of failings and ironies in life.

To pin down tropeland structurally is to do the text no justice. Walker is diverse in his renderings of themes, foci and poetic processes, constantly shifting from one style to another but still maintaining a firm sense of self and the importance of open-minded observation. The poems observe nature, people and places in equal turns. Some of the more interesting poems include a five-part examination on trees, addresses to other poets and a number of reflections on Japan.

There are strong moments of empathy throughout the collection. ‘Crying at the Poetry Reading’ condemns a perceived lack of emotional engagement in poetic responses:

It is unclear why such tears are warranted, but that is not the issue. Rather, the aversion to this display is chided. This snapshot encourages openness, rather than timely polite displays of necessary emotions. For Walker, emotional engagements are not timed precisely through the text either; these poems and situations are acknowledged with frank immediacy as and when required throughout the collection. The nudging criticism of ‘Crying at the Poetry Reading’ sits amongst more directly motivated pieces on loss and decisions about life and death such as ‘Watching My Blind Cat’ and ‘Clearview’, providing some particularly touching engagements with family and pets. Even though tropeland appears in three sections, there is no discrimination between the personal and public.

A sense of otherness is frequently addressed in the collection, but without the result that the speaker is ever in a position of discomfort. Linguistic barriers and getting lost in unfamiliar locations alike are presented with a frank playfulness that invites both tolerance and recognition of such differences. ‘A Clarity of Smog’ maintains not only the collection’s opening focus on wordplay, but also emphasises a sense of comfortable otherness. The unfamiliar is to be enjoyed rather than subverted or challenged in this piece:

The speaker moves self-consciously to an interior sense of location, after an initial disruption getting lost between train stations, buoyed by a growing confidence.

It is this sense of diligence and confidence that permeates much of the collection, alongside a healthy dose of sardonic humour from time to time. A parallel to this experience can also be seen in the five-part poem ‘Araucarias of Gondwana (Tree Dinosaurs)’, especially in ‘V. Norfolk Pine’, in which the speaker reflects on the diasporic origins of the tree in question and its prevalence in resorts:

The tree is utterly connected with human activity and intention, but Walker’s speaker finds a place for sympathy and kinship in recognition of its otherness. Throughout the collection as well there is a strongly anti-exploitative tone with regards to nature, already firmly established in this piece.

tropeland is exceptionally dynamic. Rob Walker utilises a range of forms to explore a number of issues and settings with deftness, humour and sympathy all at once. Comedy and criticism come together other in the same poems, and offer multiple angles for further interpretation.

This entry was posted in BOOK REVIEWS and tagged rob walker, Siobhan Hodge. Bookmark the permalink.
Siobhan Hodge has a PhD in English literature. Her thesis focused on Sappho’s legacy in English translations. Born in the UK, she divides her time between Australia and Hong Kong. Her chapbook of reflections on Sappho, Picking Up the Pieces, was published in 2012 as part of the Wide Range Chapbooks series. She is currently the Reviews Editor for Writ Review and an Associate Editor for Rochford Street Review. She has had critical and creative works published in a range of places, including Westerly, Axon, Contrapasso, Peril, Plumwood Mountain.