Review Short: Susan Bradley Smith’s Beds For All Who Come 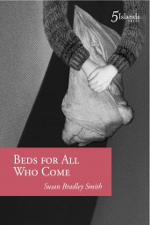 Beds For All Who Come by Susan Bradley Smith
Five Islands Press, 2014

Susan Bradley Smith’s newest collection, Beds For All Who Come, is a delicate investigation into the lives of multiple historical figures, transitioning between the public and the personal. The collection is an excellent example of écriture féminine in that a range of individual female voices write to one another, but also acknowledge a fringe of male figures, assessing imagined and historical feelings and experiences, while also exposing some potential issues with this model.

In keeping with Smith’s keen interests in women’s theatre, Beds For All Who Come is presented as if a play: the collection traverses several Acts and is headed by a cast of characters, introduced before the poems commence. Each section is clearly denoted for a particular character and deals with proposed events from that figure’s life. Smith’s historicism ties in well with her personal and direct approach to these individuals, sympathetically grounding each poetic engagement, but also linking a broader poetic concern with modes of communication and support.

Absence is one of the strongest sensations in the collection. Desires for mentors and maternal figures permeate all sections, but particularly the Frieda Hughes part, as Smith’s Frieda persona writes to her lost mother, Sylvia Plath. Each persona speaks as though to a lost originary figure, grounding herself as part of a chorus of ‘abandoned women’. However, in keeping with Lawrence Lipking’s assessment of such women, Smith’s speakers are not lost to vulnerability, but given voice, agency, and activity by their abjection and oppression.1 In a double connection to female predecessors, Smith’s Frieda writes after the style of Sharon Olds in ‘I go back to 1963’:

Plath’s body is now hermetically sealed away, barring Frieda’s access to any part of the scene or sensation, despite the fact that Plath was the lead speaker in the first half of this shared Act in the collection, and the first poem in this Act was dedicated to her. The first half of the shared Act foreshadows the problematic layering of voices to follow, especially in ‘On marrying a herdsman’, in which Plath reflects on her relationship with Ted Hughes:

The rest of the poem is rich with imagery of peeling skins, shape-changing and death, while clinging to known sensations of other figures. Connection is both the greatest desire, and most inaccessible feature of this collection. Smith’s Plath demonstrates keen passion and desires for personal engagement, but also acknowledges the constant parallel status of these: the layers can be keenly observed, but not joined. Destruction lurks at each edge. But criticism is not levelled on the need of or desire for communication; rather, a need for new forms of self-determination is highlighted.

The Germaine Greer coda completes Smith’s portrayal of problematic networks between these women. Rather than offering support or a sense of mutually beneficial community, Smith’s Greer persona wryly emphasises the self-interest and isolationist nature of such writings, but also their overall importance in the final lines of ‘On being three million dollars richer after selling my papers to the university’:

Both Greer and the biographer in this poem are firmly focused on their own needs for self-perpetuation, but at a cost. Though both figures are to prosper from this communication, Smith emphasises the fragility of such an arguably exploitative linkage. The collection closes on this affirmation, with Greer encapsulating the explorations of earlier figures and their problematic engagements with important women predecessors. Central to Smith’s closure for Beds For All Who Come is a prominent, urgent sense of self, and pressure for self-actualisation, paired with scepticism of its impact on the women involved. Écriture féminine for Smith is neither wholly beneficial, nor entirely communal in spirit, and demands revision.

Between expressions of tenderness and longing for connection, Smith interjects her poetics with a strong sense of dry realism. Though the speakers of each Act outwardly strive for communication with a lost, famous female family member, or reconcile themselves with a world that will treat them in a similar fashion, Smith’s depiction of such negotiations is firmly grounded in a need for clinical, even cynical assessment. The personal cannot be separated from the political, nor can the role of mentor be divorced from a need for independence. A thoroughly enjoyable and concise volume, Beds For All Who Come revisits absences, exposing spaces still in need of exploration and cautioning what forms of connection may be used.

This entry was posted in BOOK REVIEWS and tagged Siobhan Hodge, Susan Bradley Smith. Bookmark the permalink.
Siobhan Hodge has a PhD in English literature. Her thesis focused on Sappho’s legacy in English translations. Born in the UK, she divides her time between Australia and Hong Kong. Her chapbook of reflections on Sappho, Picking Up the Pieces, was published in 2012 as part of the Wide Range Chapbooks series. She is currently the Reviews Editor for Writ Review and an Associate Editor for Rochford Street Review. She has had critical and creative works published in a range of places, including Westerly, Axon, Contrapasso, Peril, Plumwood Mountain.