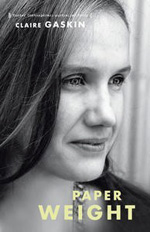 In Paperweight, her third full-length collection, Claire Gaskin shows her talent for observing fluctuations in the state of things – personal, political and environmental. Within this, she does not turn from the darker corners of the human psyche. ‘Just do the best you can’ opens with a frank acknowledgement of mortality: ‘your death keeps growing/or your life keeps contracting’. Themes of loss surface elsewhere in the collection. In ‘to construct is to omit’ she writes, ‘I grieve the self that lived here / the graves my shoes are / by the door that doesn’t open’. There are also moments of violence, such as the accident in ‘ensoul’: ‘hell loses colour in the constant rain / no emergency vehicle was called’. These poems permit the world and all its wildness, and yet remain grounded. The notion that a witness has an ethical position is significant in Gaskin’s writing. The trauma of these poems is often gendered. In ‘(after Greer)’ a woman leaves the house ‘with his handprint on her face’. In ‘Just do the best you can’, the speaker writes: ‘and yet I dreamt I was raped / wearing my sister’s wedding dress’. These are feminist poems. Some, such as ‘(after Greer), are direct critiques; in other poems resistance lies in the disquiet of Gaskin’s lucid account of dispossession, rather than an outright call for struggle.

The ability to witness events and emotional states without getting caught up in them is often associated with meditation practices. Gaskin’s poems are meditative in the sense that they are accretions of the world, gathered through calm attention. In the yoga class that I attend, meditation is called sitting, which to me suggests an open, chance-based practice. Gaskin’s poems sit with the world. Yoga could be another analogue for the poems’ attention to the presence and experience of the body. One poem, ‘dreaming of the dreamer’, suggests ‘drawing a line around your body and living within it’. More frequently, though, Gaskin’s poems blur the boundaries of the body and its surrounds. There is rain that ‘fills the pelvis bone / a bird bath’ (‘a liberty of flowers’). In her poem ‘the breeze’, the architecture of the body and the built environment mingle: ‘the breeze flattens to include / spinal staircase to a balcony brow’. Her poem ‘hippocampus’ has the body not as a temple but, pragmatically, a rental property:

Gaskin also describes bodies as repositories of personal history. In ‘stubborn beauty’ she writes, ‘he held fistfuls of history / close to my skull’. In ‘yes’, the physical work of cleaning taps into older memories: ‘I am cleaning our house of horizons / the pain doesn’t forget my body’.

Gaskin also considers they body, particularly the female body, as a contested and political zone. Her poem ‘(after Greer)’ is one of the more explicitly political examples. Gaskin uses the repetitive structure of the pantoum to collage the derogatory terms for women listed in the Female Eunuch. The simple form of the poem makes for an effective catalogue of the persistence of everyday sexism:

The title poem ‘Paperweight’ turns a moment in a café into a conversation between the poem’s speaker and Jane Austen, Virginia Woolf, Simone de Beauvoir and Hélène Cixous. Gaskin cites the emergence of écriture feminine: ‘The body must be heard / says Cixous’. Gaskin carries that thought into the following line: ‘the moon is full / the pain in my uterus’. As the ‘vegetables get hot in the car’, the woman in the café writes ‘another six pages’: a woman writing, thinking about the female figure in literature.

In ‘Guggenheim’ the female body in art hangs behind a wry commentary on the ego of the male artist who is seeking:

The narrowness of the artist’s vision is further revealed by his actions in the final lines: ‘in the suspended room he / compares me to his mother’.

Ella O’Keefe is a poet and researcher living in Melbourne. Her poems have been published in Cordite, Steamer, Overland Blog and Text Journal. She is a former director of the Critical Animals research symposium. Her work on radio has been broadcast by The Night Air on Radio National, All the Best on FBI Radio and Final Draft on 2SER FM.

View all posts by Ella O'Keefe on Cordite →