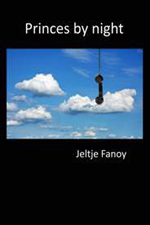 Jeltje Fanoy’s Princes by night is part poetry collection and part fragmented family history, peppered with glimpses of the Dutch colonial experience in Indonesia. Her fourth collection, Fanoy has explained that it’s partly influenced by her becoming aware of Australia’s own colonial history, and has been her ambition for many years.

Fanoy describes herself sometimes as a sound poet as well as a ‘migrant poet’, and performs under the name ‘jeltje,’ often using music, alliteration and onomatopoeia. Princes by night, however, seems very much written for the page. For the most part it is a poetics of simple and minimal language, interchanging narrative verse and prose poetry. Examples of this mode include shorter pieces such as ‘little jaap’, and one of the most strident poems in the collection, ‘Roaring Twenties tempat’:

‘Roaring Twenties tempat’ is compact and potent, using practical language against itself. In its intention and politics it is in the style of Jeltje the performer, but linguistically it is at home on the page. Its words would not gain anything by being read aloud, other than the potential to be a mouthful.

Perhaps that could work. Fanoy comes from the same era as – and claims influence from – πo, also a migrant poet with a strong performance background and one known for using regular and practical language to great effect. Princes by night does maintain the spirit of the 9 to 5 poets from which Fanoy and πo have come: its poetics is accessible to the working class whilst not dumbing down content – the issue of Dutch colonialism is hardly familiar to most Australian readers.

Indeed, the intervention of Dutch and Indonesian into the poems (explained by the handy glossary in the back) adds a richer flavour to the language, such as in ‘Kasihan and soedah’: ‘before consulting a Bahasa Dictionary, that Kasihan! meant: Poor thing! / and Soedah stood for: There’s nothing we can do about it’. This use of multiple languages may be a reflection of what, in the poem ‘kaum sana (1947)’, Fanoy refers to in Dutch as a ‘mengcultuur’ or mixed-culture.

As well as multilingualism, pieces like ‘What if (1947)’ jump out from the collection with vivid accumulations of imagery:

These instances are a break from the often-familiar domestic images or the recounting of dates and events that dominate the beginning of the collection. For a reader fairly unfamiliar with Fanoy’s history or the history of Indonesia during the time the Dutch occupied the islands, there is a feeling of being lost in names and places. Perhaps a reader closer to the content would react differently to the collection’s opening poems. Regardless, by the end of the book I was not disappointed that I had been immersed in something unfamiliar or not given a more thorough run-down of the family history. That is not the role of poetry in this instance.

Rather, the nature of the verse is suited to the fragmentary nature of recounting memories that aren’t one’s own. In an early poem, ‘The unnamed relatives’, Fanoy seems to incorporate the act and difficulty of remembering into the process of the collection, perhaps giving some context to the nature of the memories she recounts: ‘my father, nervously, / would take off his glasses / and, occasionally wiping them, / tried to recall, painstakingly, / the names of unnamed relatives’. Many of the poems are also taken from and interpreted through photographs which accompany the collection. Drawn from her father and grandparents, these memories represent the perspective of the Dutch colonial population, as sympathetic as that may be to local Indonesians and to their servants.

The reader does get a sense that Fanoy is aware of writing from a privileged position as a family of colonisers. The voice of the collection is critical and self-reflexive, perhaps influenced by Fanoy now writing from a position as a migrant in Australia. This is most obvious in ‘The Atjeh-problem, and how it can still be solved’, where Fanoy takes the perspective of a relative rebelling against the Dutch army states, ‘the terrible atrocities / that were being conducted / and, condoned, in their name’.

By describing the military experience of the colonial era, Fanoy explores the guilt of being in a powerful position and offers a reaction against it. On the other hand, the latter half of the book focuses on the family’s servants and staff, poems that are written with affection but noticeable by their lack of reference to the cultural conditions of the staff’s employment. How much of this angle represents her parents’ memory and how much of it reflects her own view, can be hard to decipher. Princes by night points to how subjective memory can be and the difficulty in faithfully rendering it as well as critiquing it.

This aspect of the collection is particularly important for the book’s primarily Australian audience. As well as dealing with its own colonial history, it can be argued that Australia is presently a dominant power over Indonesia despite the paranoid mythology of potential Indonesian invasion, something that my own relatives in the military often expressed.

In previous work, Fanoy has addressed the migrant experience in Australia. In an interview on Spoken Word 3CR in February, however, she talked about writing more on the migrant experiences of others, such as refugees whose experience contrasts to her own position of relative comfort as a Dutch migrant who’s lived in Australia for decades. In other work, she has also talked about the plight of indigenous Australians.

In this interview, Fanoy cites the experience of coming to Australia and being exposed to our own colonial history as one which made her more aware of her own. With Dutch colonialism now a distant historical scar on our region, the point of writing about it, other than for her own personal exploration of her ancestry, lies in its comparison to the contemporary moment. When I read:

I immediately think of Baltimore and the related race rebellions sweeping the United States; or of Palestinians throwing rocks; or of the Redfern riots. Those images have a universality that allows readers to connect with Indonesian history and what it means to explore it now.

Pages: 1 2
This entry was posted in BOOK REVIEWS and tagged Benjamin Solah, Jeltje Fanoy. Bookmark the permalink.
Benjamin Solah, raised in the western suburbs of Sydney, but now residing in Melbourne, is a writer, poet, spoken word artist and the Director of Melbourne Spoken Word. His work has been described as 'no-holds barred, passionate' and is often concerned with oppression, resistance and popular culture. His work has featured in publications including Overland, Geek Mook and The Emerging Writer, and has performed poetry around Melbourne, including at the National Gallery of Victoria and readings such as Passionate Tongues and The Dan Poets. He published a dual EP, Duel Power, with Santo Cazzati in 2012 and a chapbook concerned with the treatment of asylum seeker, broken bodies in 2013.