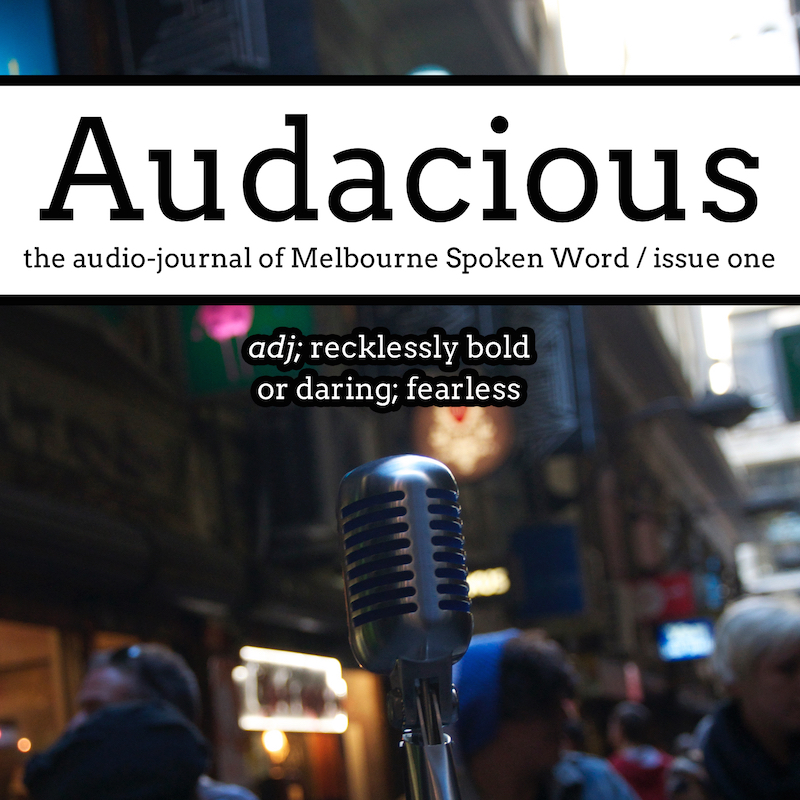 Coming straight at your inner eardrums is the debut volume of Audacious, the audio journal of Melbourne Spoken Word. Like a night at Passionate Tongues, or an afternoon at the Dan, this collection presents a variety of poets at different levels of artistic development. Some are seasoned and in full flight, while others are up-and-comers still finding their voice. In this volume at least, Audacious offers more of the latter. But the uneven, unpredictable quality of live poetry gigs – where sometimes you connect with just one poet – more often than not gives enough to make your night. In this sense, Audacious is an accurate reflection of local spoken word: certainly a gamble, but one well worth taking.

Live poetry in Melbourne is a jumping crisscrossing of mic leads and literary live wires where Melbourne Spoken Word (MSW) is ever-present, organising and promoting a broad spectrum of poetry events. In this spirit Audacious has potential as another developing platform for Melbourne’s spoken word scene. By no means the first of its kind, issue one is preceded by similar chronicles of audio poetry such as Project 3056 (2010) compiled by poet Benjamin Theolonious Sanders (IQ), and sits alongside the recent audio accompaniment to Unusual Work 18. While these latter collections may be more nuanced in their focus, what makes Audacious distinct is precisely the unevenness characterising its inaugural outing. The loose, open-ended journal format suggests malleability – a potential to reflect changes in the scene as they come. The motley collection spotlights one camp in a diverse local scene: one frame of a landscape in constant flux, this is by no means a definitive guide, but rather a point of entry.

The best moments in Audacious are when the categories of poetry and performance support one another; or perhaps, when artists are least self-conscious of these categories. Jacky T’s ‘Landmark’ is exemplary of this and a highlight of the collection. The home truths of the poem – loss and the desperate banality of living in its wake – emerge painfully through voice and its tension with the music simmering underneath. Like a held breath, pushing the words forward, the listener is held by every impression until the poem’s final line: ‘As the traffic lets up, you hold a note and bend it / We listen as we pass.’ And then the music pours forth like an exhalation, a release for the grief that words cannot find.

In regrettable contrast are the frequent attempts to conform to tired notions of ‘poet’ or ‘slammer’. These are immediately apparent in clumsy, forced rhyme (‘this age of apathetic muscles, collapsing corpuscles […] lost in the vortex of your cerebral cortex’ – O’Sullivan’s ‘Language of Ghosts’; ‘gyrate with my mates in my irate pirate crew’ – Dennis’ ‘Pirates’), exaggerated breaths (Hassell’s ‘The Talk’), inexplicable climaxes and denouement (‘you couldn’t even decide between being a couch … or a bed / You don’t know who the fuck you are!’ – Weitzman’s ‘Couch’) and lackluster repetitions (‘we can’t see you we can’t see you we can’t see you’ – Fury’s ‘Google’). The self-loving arrogance evident in ‘I make love to the lyrics of the words of the songs I have written for the girls’ (‘The Talk’) is, contrary to the poem’s intentions, neither sensual nor liberating. The (mis)appropriation of once politically-charged forms like slam is the aural equivalent of donning a Che Guevara t-shirt – opportunistic and insincere in spite of the purported political awareness of the wearer. These poems and their delivery exemplify US slam poet Taylor Mali’s point about performance-poetry-by-numbers in his now classic ‘How to Write a Political Poem’: ‘Mix current events with platitudes of empowerment. / Wrap up in rhyme or r-r-r-r-rhyme it up in rap until it sounds cool.’ In other words, what is actually being said becomes secondary, incidental to the form. The uncritical adoption of the stylistic idiosyncrasies of performance poetry, slam, and hip-hop – from the punchy delivery and syncopations, down to the drawn breaths and American swagger – are imitation verging on parody. There are even instances where the accent shifts from Australian to American within the same piece.

Things don’t really start to cook until the third track. Anastasi’s ‘Initiation’ is conspicuous by its comparative modesty: at forty-four seconds it is lamentably short. ‘An abrasive lace-lined collar / the tickle of water winding between nose and cheek / the forming of hands into towers…’ delivers the listener directly into the sacramental moment. The economy of sound and word carves intimacy in earnest between poet and listener. Like any good performance, the occasional bum note or clichéd phrase is eclipsed by sincerity of feeling. Richardson’s ‘Love Song to Poetry’ is another case in point: ‘There among the used condom heaps of the world, among the McDonald’s wrappers and discarded babies’ toys I saw poets hanging on meat hooks … I saw the hero with a thousand names knowing anything is possible…’ Here, and in the poems that storm the album home (Woolf’s ‘Beloved Brother,’ Burrows’ ‘Cancer,’ Sapoznikoff’s ‘Grip’ and Supski’s ‘For Them / There’) delivery is unaffected, conjoining voice and word in unusual ways. Supski’s poem is another major highlight. A biting response to Audre Lorde’s maxim, ‘Poetry is not a luxury / It is a vital necessity of our existence,’ Supski asks, ‘Can a word unlock / unlock a door? / Can a word cut / cut a barbed wire / barbed wire fence?’ The urge to weed out tired devices and trite observations is enacted in poems such as this, with earnestness unfeigned and unafraid.

The journal’s editor and MSW’s founder, Benjamin Solah, navigates these disparate poems by underscoring their contrast to one another. Following Solah’s argument for a subjective definition of ‘slam’ in his article ‘In Defense of Slam,’ the interpretation of spoken word here is also subjective: we get from it what we bring to it. With this collection, Solah doesn’t attempt to unify these performances or define spoken word: Audacious invites the listener to make their own inquiries and reevaluate their own preconceptions. The first issue of Audacious may be a little unsure of itself, but these are the understandable growing pains of a debut. Proving that poetry is always in flux, Audacious is now already somewhere else. Its second volume, released earlier this year, suggests an encouraging improvement in content and a broader collection of voices. It is well on its way to becoming an important platform and proving ground for Melbourne’s spoken word artists.

This entry was posted in BOOK REVIEWS and tagged Benjamin Solah, George Mouratidis. Bookmark the permalink.
George Mouratidis is a poet, translator and the co-director of the 2019 Greek Writers Festival. His debut collection Angel Frankenstein was published in 2018 by Soul Bay Press.