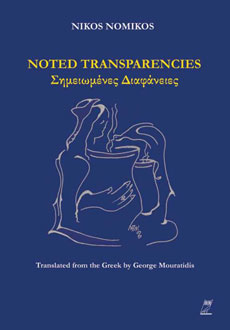 Honest and intimate, transparency is the term and practice giving Nikos Nomikos’s Noted Transparency (or Σημειωμένες Διαφάνειες, pronounced ‘Simiomenes Diafaneies’) its immediate impact. Born in Alexandria, Egypt in 1934, Nomikos has published nine poetry collections, with Noted Transparencies the later work of a mature artist. The maturity invoked creates a sense of life lived, of a past haunting a present. The collection contains 30 poetic vignettes, all, with one exception, revealed and written ‘in the mute hours’ of a single night. Out of these night surges the remembrance of a formative childhood moment on the edge of the Nile. Published bilingually by Owl Publishing, its original Greek has been placed parallel to its translated English, marking the first time Nomikos’s work has been available in English, while emphasising that what is being read is a mediated reconstruction of Nomikos’s vision. It has been collaboratively translated by George Mouratidis to convey storytelling over the rhythm.

It moves between dualisms, revealing them to be encompassing each other in paradox: youth and age, liminality and transcendence, memory and reality, creation and destruction, a lifetime held within a single night. The simplicity of Nomikos’s language opens up to a religious enrichment and complex worldly knowledge. Mysticism is contained within the corporeal world. Absence becomes a presence, nostalgia for an imagined past a pleasurable punishment. The ‘rosy coloured springtime’ carries ‘the winter of Persephone’: life and its end mutually constituting forces, not discrete entities.

Nomikos’s work is one of return: to childhood, to that moment on the Nile, to faraway times, teachers, possibilities and homelands he has never experienced, and ultimately to God. Nomikos belongs to two prominent writing traditions: Alexandrian-Greek poetry, and ‘first-generation’ Greek-Australian migrant writing. The experience of migration and diaspora is integral to his ultimate concept of return, written as a fragmentary and self-alienating process that needs to be addressed and reconciled.

One process Nomikos offers for reconciliation is through religion. Figures, practices and symbols from Greek Orthodoxy suture the fragments. Central to Nomikos’s vision is the figure of a ‘towering lord-like man, with a parchment spread across his chest.’ Although this figure makes him feel like an ‘ant,’ bringing with him the unknown sublime and ungraspable ‘old, happy world to which (Nomikos) once belonged,’ this figure is not intrinsically negative. This ambivalent figure promises finitude, connection, reassurance and an end to material desire. In this vision, all are moving towards an apocalypse. But even this apocalypse becomes a potential point of return and shared connection between humankind.
While faith is integral to Nomikos’s experience of the world, he acknowledges that the self shifts with time, the world, and chance:

Here, religion, myth, and memory create and centre a very personal world, inventing and interpreting both the past and present. While some use these narratives to console and protect, others, as shown in one of his more striking fragments, use them to excuse and conceal:

One way of overcoming selfish inhumanity is offered through self-renunciation. Quoting Nikos Karouzos, another Greek poet Nomikos chanced to meet, ‘I have nothing and I am free,’ Nomikos’s highlights his practice of worldly asceticism, which permeates the pieces. Contemplating ‘at which height is a human being able to / reach his stature, amidst the blows lovingly proffered to him by his good / fortune,’ perhaps Nomikos speculates that it is only with self-imposed limitations on the self that ‘self’ can truly be revealed and given the space to roam free in ‘the decency of spiritual light.’ This is encapsulated in the physicality of his study-room: ‘three by three, / but with vast ascetic dimensions, / full of fires and passions.’

Protagoras’s ‘Man is the measure of all things,’ a humanist standpoint of individual, not absolute truth, is the second tenet of Nomikos’s poetry and worldview. Nomikos is respectful of the ‘permanent binoculars’ (29) through which life is viewed, ‘everywhere and always, within the boundaries of my own/world.’ This leads to accountability and the ethical ability to read the self. The wisdom and classically refined lines of Nomikos make for a beautiful reading experience. Efforts such as these of Owl Press should be made to retain Nomikos’s original Greek, but it would be a welcome joy to see more of this poet’s experiential work become available to a wider audience through translation.

This entry was posted in BOOK REVIEWS and tagged Brianna Bullen, George Mouratidis, Nikos Nomikos. Bookmark the permalink.
Brianna Bullen is a 2017 Deakin University creative writing PhD candidate planning on writing a thesis involving posthumanism, science-fiction, neural implants, memory and materiality. Works of a speculative nature imagining possible futures, and those focusing on the body, greatly appeal to her. Her honours thesis focused on clones, robots and art. She has had fiction and poetry published in Wordly, Imagine Journal, LiNQ, NoiseMedium, Verandah, Voiceworks, with arts criticism in Buzzcuts.