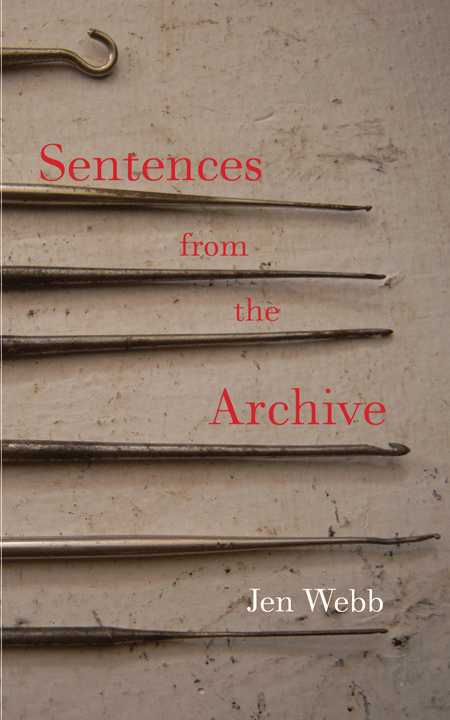 Sentences from the Archive by Jen Webb
Recent Work Press, 2016

In 2011, Ginninderra Press released The Indigo Book of Australian Prose Poems, edited by Canberra writer Michael Byrne. While many of the country’s most accomplished poets were represented there, the book’s reception was somewhat muted. Indeed, prose poetry invites a certain amount of suspicion. While we’re happy to concede that many devices and techniques which would have been definitional of poetry a couple of centuries ago no longer do so, we’re reluctant to jettison lineation.

Yet it could be argued that prose poetry is poetry in its purest form. When lineation becomes optional, we’re left with writing that stands tenuously on the poetic impulse for its existence. Prose poetry skirts the pyrotechnics of poetic technique and device to nakedly rely on the essential quality of poetry – succinct, resonant language.

Jen Webb’s small volume, Sentences from the Archive shows the sorts of things well-executed prose poems can and should do. Webb’s prose poems feel like they’re written in one long line, the rhythm lilting like everyday speech, then catching in the throat when the implications of an observation reveal themselves to their creator. They exploit colloquial language, but disarm the reader with a sudden, heightened image, then casually change tack and tread softly into metaphysics. Above all, their appearance of conversation is deceptive – while they appear to address us ‘off the cuff’, they are carefully crafted and attenuated.

Your ridiculous hair, my spray-on dress, my blood, your sunsets. You, who can’t distinguish green from blue; you, who calls orange red: you have claimed this hour. When the sun begins its fall you open the windows, belt out the aria from The Pearl Fishers, and the sun crash-lands behind the Brindabellas, and you sing on. The evening rises to meet us, and I have almost forgiven you. Three streets over there’s a siren calling off-key, B flat to your C, and if memory could speak it would say lock it in, Eddie, lock it in

The language here is conversational, the tone casual, the affection between speaker and her subject (presumably an ex-lover) is palpable, but the whole domestic recollection is underlined by an almost belligerent rhythm and a series of beautifully realised images that lend the poem a sense of something fraught – the juxtaposition of the image of the calamitous ending of the day (the sun ‘crash-lands’ after its fall towards darkness) with the seemingly unrelated assessment that ‘I have almost [but not quite] forgiven you’. The tenuous nature of a relationship that appears to be dying with the day. This is further reinforced by the two songs that weave through the poem’s later stages – the lover’s ‘belt[ed] out’ aria from The Pearl Fishers and the tortured ‘off-key’ song of the siren in the distance, knitting the soul and the world together. There’s nothing sentimental about this, but the sense of sadness is deeply moving.

The apostrophe of the poem’s opening, emphasised by the repeated ‘you’, ‘your’ and ‘my’, hints at both a sense of frailty and a kind of growing resentment. While the lovers initially seem quite exquisitely balanced, ‘you’ tends to dominate at the poem progresses, the semi-colons holding this balance until the more determinate colon takes over and the narrator realises ‘you [not me, not us] have claimed this hour’, even in the space of her own memory.

Borrowed from a TV quiz show, Webb’s last line is haunting. In lesser hands it could trivialise, but it doesn’t. It reiterates the domestic nature of the scene and with a wry smile locks a seemingly mundane observation into the treasures of memory. It’s clear-eyed but affecting; it resonates without a hint of self-pity.

There are many such satisfying pieces in Sentences from the Archives – I think of ‘In the eye of the storm’, the series ‘Waiting for the bus’ and the final ‘Da capo’. The latter’s final image to both poem and book is a sensuous and evocative summation of the tone and subject matter of the entire volume: ‘You pass out drinks and comfort the cat, and calm comes in with the evening light, and the sun sets, perfectly, and night curls itself around the house.’ As with the previously discussed poem, the particular and wider worlds blend seamlessly in the image.

If I have a reservation about the book, it’s an unease at some of the endings of these poems. Too often, Webb displays a tendency to go one sentence too far, either diluting a resonant ending or ‘spelling out’ the point of the poem a little too explicitly. In ‘Tarte au citron’ for example, she concludes, ‘Never go back, they say. I never have’. The final sentence, it seems to me, is implicit in the penultimate one, and doesn’t need to be articulated. Similarly, in concluding the eighth and final section of ‘Waiting for the bus’, Webb writes, ‘Sure your lover will be temporarily bereft, but someone else will chair the meeting, play the ball. It will all go on, while you will not, while you drift like smoke into history.’ The final sentence, for this reader, forces a kind of wider significance on the poem, and the image that threads it isn’t particularly striking or original.

But this is a small reservation. In all, Sentences from the Archives is a delight. For both aficionados of the prose poem and lovers of poetry in general, it provides many moments of pleasure and insight. I look forward to Webb’s further excursions into prose poetry.

This entry was posted in BOOK REVIEWS and tagged Jen Webb, John Foulcher. Bookmark the permalink.
John Foulcher has published ten books of poetry, the latest being 101 Poems (Pitt Street Poetry 2015), which is a selection of the previous nine collections. A new collection will appear from Pitt Street Poetry early next year. His work has appeared nationally in magazines and anthologies over the past thirty years. In 2010-11 he was the Literature Board resident at the Keesing Studio in Paris. He lives in Canberra.