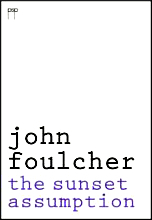 At Pitt Street Poetry, a new poetry imprint in Sydney, the venture begins with the production of John Foulcher’s ninth book of poetry, The Sunset Assumption. I fell in love during the reading of this book – so strong were my feelings. But ‘in love with what?’, I kept querying. Not the expressions of love itself: human love is an assumed thing in this book.

Earlier work by Foulcher has canvassed the children, the marriage. Here, in Paris, there are only ‘fragments from home’: a smooth comfort of long-term loving, the shared memories that cannot be come by in any other way. In a foreign city, the poet dreams ‘about houses that sprout familiar walls’, where the light is ‘wild moonlight’.

This book is rather about spiritual living and history; about light and dark but not always in an oppositional way. It concerns our beliefs about religion and about art, and also about the rightness and wrongness in historical moment and politics.

The poems are mature and reflective, emerging out of Paris, yet not confined by the place or its history. ‘City of Light’, the place also has its shadows, and the book explores both as it flows back and forth between concrete solidity and the ethereal, intangibles.

The form of poetry ranges from prose poems to couplets, with short-ended lines and mostly short poems. There is an astonishing newness of image, a stunning gift of presenting the old as alive, as in ‘Snow’:

Foulcher’s early work was starkly imagist: ‘no ideas but in things’ as William Carlos Williams put it. It moved then towards the ‘learning curve’ of narrative, before entering a more surrealist form. In this book, the flowering of all those developments becomes a brilliant companionship of clarity, opaque possibility and imagist beauty as we are drawn along the trajectory of an unveiling of a spiritual belief both diffuse and full of an absent presence.

The first poem in this book introduces light as character witness, the active element at play, and it flows with a kind of tenderness:

In ‘The Suit’, his mother, during his dream, inhabits a house not hers in reality but one that is ‘sprinkled with light like icing sugar’.

Later in the book, light spills from the paintings Foulcher uses to enter into the French Revolution, with its extremes and madness. Regarding Monet’s painting Camille Monet sur son lit de mort, 1879:

Pages: 1 2 3
This entry was posted in GUNCOTTON and tagged John Foulcher, Robyn Rowland. Bookmark the permalink.
Dr Robyn Rowland AO has published nine books, six of poetry, most recently Seasons of doubt & burning. New & Selected Poems (2010) representing 40 years of poetry. Her poetry has appeared in Being Human, ed. Neil Astley, (Bloodaxe Books, UK, 2011). Silence & its tongues (2006) was shortlisted for the 2007 ACT Judith Wright Poetry Prize. Rowland is winner of poetry prizes, including the Writing Spirit Poetry Award, Ireland 2010. She is an Honorary Fellow, School of Culture and Communication, University of Melbourne, Australia and a member of the National Advisory Council for Australia Poetry Ltd. Rowland curated and presented the Poetry & Conversation Series for the Geelong Library Corporation, 2010-2012. She is currently working on a bi-lingual book with Dr Mehmet Ali Çelikel in Turkey.